Five reasons the Olympics are over for USWNT 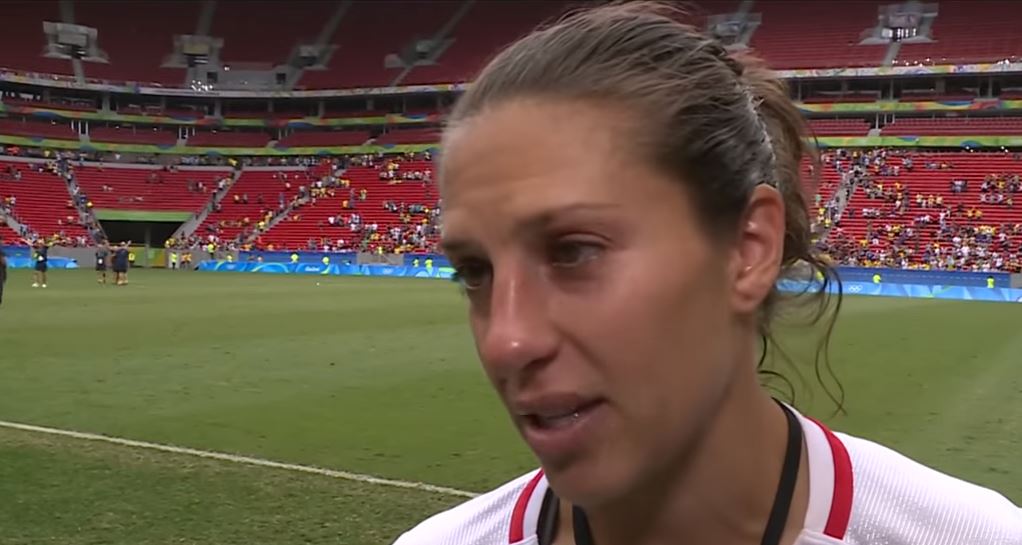 Carli Lloyd and the USWNT are headed home earlier than expected.

The United States women’s national team failed to make the semifinals of a major tournament for the first time ever – in 13 tries – on Friday, losing to Sweden, 4-3 on penalty kicks after a 1-1 match through 120 minutes.

Here are five reasons the United States women are heading home instead of to a semifinal against Brazil:

Inability to break down the defense

When I spoke to Tony DiCicco before the tournament began, he predicted the United States would win but cautioned against having to go up against an organized defensive effort. “We saw in the Euros; we saw in the Copa,” the coach of the 1996 gold medalists said, “teams that are physically fit and organized give the bigger teams problems. That means the U.S. is going to have to break down really organized defenses. I don’t think we’re great at that. That’s my biggest concern.”

That concern was on full display for much of two hours on Friday afternoon at Mane Garrincha Stadium in Brasilia. Sweden sat deep and absorbed pressure for a large majority of the 120 minutes and the U.S. was rarely able to break through to win quality shots in dangerous areas. It is not a tactic that works very often but it seemed the right way to go for Sweden who likely would have been decimated trying to take the battle to the middle of the park. It is also a strategy that has given the United States fits for the entirety of the Jill Ellis era.

[CURREN: Plenty of mistakes for USWNT, but you can’t win them all]

In the World Cup qualifying opener in 2014, Trinidad & Tobago bunkered in and a dominant but frustrated U.S. side escaped with a 1-0 victory. There were similar scorelines earlier this year against Mexico in Olympic qualifying and South Africa in a recent friendly. The difference with Sweden is that they managed to strike on a well-constructed counterattack to take the lead and alter the dynamics for the rest of the match.

This is a roster in transition

Despite the oft-regurgitated notion that the U.S. women are a never-ending string of great players ready to step in and keep the team at the top of the mountain, the truth is that the roster is in transition. Lauren Holiday’s retirement altered the landscape in midfield and even if Christie Rampone and Abby Wambach were operating in reduced roles at last year’s World Cup their leadership—and yes Wambach’s aerial presence—is not an easy thing to replace. On the flipside, Mallory Pugh was asked to play a vital role at 18 years old, and while she had a few spectacular moments, it is easy to forget that a year ago she had never even been in a camp. Even Allie Long at 28 wasn’t even in the conversation as recently as March and wound up being a starter.

As the women’s game catches up to the men’s in terms of development and parity, it is likely to mirror it more and more in terms of results. That means the United States and other countries may stay near the top for long stretches but will be more likely to trade off periods of dominance as golden generations roll in and out around the world.

Let’s get one thing clear: Once Megan Rapinoe was added to this roster, she was always going to be the player Ellis turned to if the team needed a late goal. It also needs to be said that even if Rapinoe was never going to play the 48 minutes required between entering the match and the end of extra time, when you’re losing, you worry about getting the match tied first, and extra time second. Those are the breaks of being the team playing catch-up.

The two points for debate are whether Rapinoe should have been on the roster in the first place and how the residue of her having to sub in, and then out, affected the team.

Including Rapinoe on an 18-woman roster was always a risk, and when the tournament started and she still had yet to play a competitive match and was not even dressed for the first two games, it went from a gamble to extremely questionable — especially with such a small roster and a healthy Heather O’Reilly along for the ride as an alternate. There could have been other options as well but we’ll save the roster development discussion for another time.

The issue of how this particular match played out is interesting as well. When Rapinoe came on she replaced Kelley O’Hara, leaving the U.S. in a three-back which was hardly a huge risk with Sweden sitting ever deeper. Once the U.S. scored it was time to restore the back line to the standard four and that’s where the head-scratching began. Rather than put on Ali Krieger, the starting right back at the World Cup and a proven penalty kick taker, Ellis replaced Rapinoe with Christen Press who was mostly ineffective even before skying the anchor spot kick high.

Anyone can come off the bench and have a bad day as happened to Press. But the odd maneuver left Heath to finish up at right back, which is glaring not so much for how she handled the position as it was for the absence of her considerable skills in midfield. No player who held over from Canada has improved as much as Heath and it was a rather stunning decision to have her on the field but not in a creative, attacking position on the flank.

Another option here would have been to just move O’Hara up—into the position she played when fortunes turned at the World Cup last summer—and then drop her back to fullback again as the situation warranted. But again, once Rapinoe was named to the roster, she was going to be the one in that position.

If you take a moment to think about it, the United States playing seven World Cups and five Olympics and never finishing worse than third is one of the more remarkable runs in sports. Player turnover aside there are just too many factors that can creep into a given day of soccer to make that anything close to ordinary. Think of the 1999 World Cup final when the U.S. twice trailed a good Germany team in the quarterfinals, or the 2011 World Cup when Wambach saved their bacon against Brazil at the same stage, or the 2012 Olympics when Morgan’s last-second goal in the semifinals prevented PKs.

Soccer is just not the sort of sport where the better team goes out and enforces its will every day. There are great goalkeeping performances, bad bounces, questionable referee decisions, and even sometimes bunker tactics, all of which can derail even the best sides on a given day.

[MORE: Brazil through to medal round on PKs over Aussies]

Before the match I expected the United States to win rather handily and if they played Sweden again this Friday I would probably feel the same way. But the one that mattered didn’t work out quite the way most thought it would.

I’m not talking about the trip from the Amazon to play a Swedish side that was in the same venue as their final group-stage match. That may have been a factor late, and was mentioned by Ellis when she was asked why Crystal Dunn opened on the bench. The broader context of being tired is that after winning the World Cup last summer the players returned to NWSL and also embarked on a 10-match victory tour complete with goodbyes to Wambach, Holiday, Shannon Boxx and Lori Chalupny.

After a short holiday break came the January camp, and then SheBelieves Cup, a few more friendlies, the start of NWSL season, more friendlies, back to NWSL, and then more friendlies as final Olympic preparation. Carli Lloyd, in comments made on live television, said it was a long year and that is a big part of why the World Cup-Olympic double has yet to be pulled off.

In an era of women’s soccer when talking points usually focus on teams like Colombia and Costa Rica not spending enough time together, it might be time to start wondering if the United States actually spends too much time together.