USWNT Things Learned: Lots of mistakes, but hard to win them all 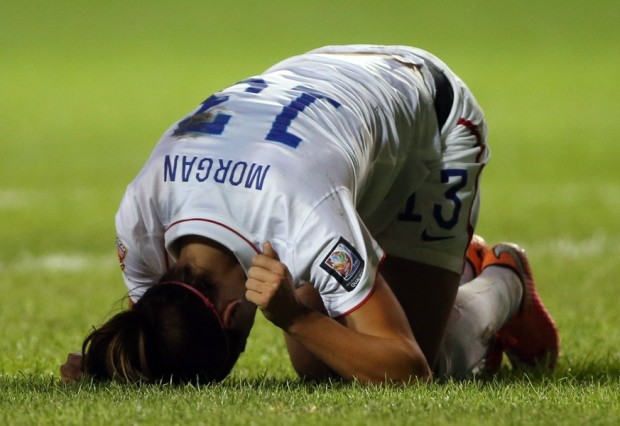 Alex Morgan’s equalizer was not enough to get the United States past Sweden on Friday. (USA Today Images)

History may have a knack of repeating itself, even if the permutations may not end up being exact replicas of each other in the end.

Friday’s Olympic quarterfinal wasn’t the first time the U.S. women’s soccer team has found itself in a tough game in a knockout situation, even though sometimes our memories tell us they have crushed everyone forever. Most recall (or at least know of) 1999, but in 2004, it won each of its three by the same 2-1 score, it went to extra time in both the semifinals and finals, but the USWNT won them both. In the 2008 quarterfinals, Canada took the U.S. to 120 minutes and it was Tasha Kai (now of Sky Blue FC) who scored the game winner. In the gold medal match, it was Carli Lloyd who beat Brazil in extra time.

Most probably remember Abby Wambach’s heroics in the 2011 World Cup quarterfinals (which, of course, ended in a heartbreaking loss to Japan), and of course, there was the 2012 Olympics when – behind a performance for the ages from Christine Sinclair – Canada appeared to have the USWNT beat until a couple of interesting calls and a late, late Alex Morgan header ended their gold medal dreams.

We’ve come to expect the United States to win at women’s soccer because, well, they’ve (almost) always won everything. They had never been eliminated before the semifinals of a major tournament, like ever, and came in as three-time defending Olympic champions. So even after a lackluster first half that saw more waste than your average school lunch, the United States was surely going to win, right? They were the better team and they would eventually find a way because they’re the USWNT, dammit, they don’t lose. At least not at this stage.

But despite their dominance over the years, soccer is not a game where the best team always wins. Which is why it is great. And frustrating. Sweden, who had been beaten by host Brazil 5-1 a week ago in a game that could have been a whole lot worse, to the surprise of no one, set out to defend, putting 10 players behind the ball because if they didn’t, they would likely have been picked apart by a more athletic and skilled USWNT squad.

It’s a strategy that the U.S. has seen 5,643 times (estimated) and many times more often than not have found a way to overcome it through mentality, through fitness, and yes, sometimes through someone named Abby Wambach and her aerial dominance.

For whatever reason, though, it just wasn’t there Friday. The U.S. lacked the urgency it always has in these spots and managed just one shot on goal in the first 70 minutes, eventually getting countered (beautifully) for a goal. They managed to, somewhat fortunately, get the goal back, and then seemed to press for the winner in regulation.

But then in extra time, not so much. The shots they did get rarely tested Hedvig Lindahl in the Swedish goal and by the time it got to penalty kicks, it’s a roll of the dice that they eventually lost.

It’s easy, though, to try to derive too much from one result. If this match played out the same way 10 times, the United States would have won it eight (possibly nine) times. Friday wasn’t their day. We’ve come to the point where we expect them to win it 10 times, but I’m not sure how realistic it is when playing proud opponents like Sweden, who – although outmatched in many areas – have experience and talent enough to at least be able to be a threat against them (Sweden has now gone four meetings with the USWNT without a loss, for what it’s worth).

There were many things the U.S. did poorly, from bizarre substitution (and penalty kick selection) patterns to an inability to combine in the middle of the field to poor service after poor service both in the run of play and on set pieces. But none of us are who we are at our worst moment and I don’t think the gains made in the past year both in style of play and results are a fluke.

Unfortunately, in the world that is women’s international soccer at the moment, a chance to prove that will not come until the 2019 World Cup in France. Carli Lloyd will be turning 37 by then, Hope Solo 38, and new faces like Ashley Sanchez, Dani Colaprico, Rose Lavelle, Jaelene Hinkle, Sam Mewis, and others will be fighting to get involved in the action. Three years is a long, long time to stew. Just ask Germany (who at least had the Euros, I guess), whose loss to Japan in 2011 not only ousted them from that tournament, but eliminated them from the 2012 Olympics as well.

What else did we learn in the shocking exit (the game technically goes down as a 1-1 draw with the United States losing on penalties)?

1) Give Pia Sundhage and Sweden some credit

We’ll get to Hope Solo at the end, but Sundhage has been easy to pick on in the past year as Sweden has struggled, not only losing but suffering lopsided defeats in Canada (4-1 to Germany) and in Brazil (5-1 to the hosts). There was some luck involved, obviously, but for Sweden, even with all its veterans, to have the confidence and discipline to pull off a performance like this deserves respect. Sundhage even lost a big part of her gameplan when Fridolina Rolfo was forced to exit with an injury in just the 18th minute, but Stina Blackstenius not only stepped up, but scored the Swedish goal.

I told Pia Sundhage about Solo's criticism ("cowards," etc.) & asked if she was comfortable with #SWE's approach. "Yes. We won."

The U.S. has been able to exploit every opponent, good or not, on set pieces of late, but Sweden stood tall, not allowing Julie Johnston any room to maneuver, and between Nilla Fischer, Linda Sembrandt, Lisa Dahlkvist, and Caroline Seger (all veterans), having someone get a head or body on the ball to clear it. The U.S. goal was really unfortunate, but they didn’t let it be fatal.

2) The U.S. seemed to have matchups it liked

In theory, having Tobin Heath be able to run at Elin Rubensson and Lotta Schelin for 90 minutes should have produced gobs of chances for the U.S. And when Mallory Pugh (and Crystal Dunn when she got in the game) started finding space in the middle, it seemed like getting goals were only a matter of time. But they never came.

Even now, it’s hard to pinpoint why. The most obvious answer is the lack of quality in the final third, there were some dreadful crosses and so many shots from 18-20 yards out that missed the target (some of them badly). Even Lloyd couldn’t seem to get any of her attempts anywhere near the net. When the U.S. couldn’t break Sweden down through the middle, they looked lost and confused. And now eliminated.

It’s easy to criticize from my couch, but Ellis and the USWNT did not look like a team that was comfortable with the pressure of the situation. Maybe because they haven’t had a whole lot of practice at it. Down a goal, it made sense to bring on Crystal Dunn and go to three in the back. Megan Rapinoe’s insertion (and by proxy inclusion in the squad at all) was a little questionable because she did not look close to 100 percent against Colombia, but it was desperation time, so OK (although I would have left Kelley O’Hara – more of an offensive threat – in and replaced Megan Klingenberg).

Ali Krieger: looks at Tobin Heath stuck at RB, then looks in the camera like she's on The Office. #USAvSWE

After the U.S. scored, Ellis immediately placed Heath at right back, which was a decent temporary measure, but she still had Ali Krieger on the bench, who could have entered and put Heath back on attack against a tired defense. Instead, in extra time, Ellis had a straight swap with Christen Press (who struggled in Brazil) for Rapinoe, leaving Press wide and Heath still at right back. Krieger never entered.

Then there were the penalties, where Krieger was one of the regulars at the 2011 World Cup, but she wasn’t on the field. Heath also took penalties in 2011 (although she missed in the final), but never got a chance, with the final kick going to Press. It’s a brutal spot for anyone to be in and hindsight is always 20-10 and such, but Press has not been in great form and hasn’t been playing with confidence when she did play at the Olympics.

I really feel for Christen Press. Edited her work while in Sweden. She's brilliant writer. One of two best I've worked with in 31 yrs at SA.

It will be interesting to see what kind of “Victory Tour” the USSF tries to cobble together in the next few months, but without medaling, they have the two friendlies already announced (against Thailand and the Netherlands), and they’ll likely try to play a few more, but who knows. At this point, we’re in uncharted territory? The USWNT played only 16 games in 2013, and just eight in 2009, but I would expect 2017 to be closer to the top number. The only tournament they played in three years ago was the Algarve Cup, but the SheBelieves Cup (maybe with a new name?) will be back next March.

Honest Q: I wonder if this will have a significant impact on a post-Olympics "Victory tour" for the women, since that's a huge rev driver

After that? Who knows? World Cup qualifying isn’t until the fall of 2018.

I’m sure you’ve read plenty of takes on Hope Solo’s postgame comments by now, so I’m not going to pile on other than to call them extremely disappointing, especially when she’s representing the United States. I’m all for pregame talk (as long as you can back it up), and everyone is entitled to their opinion, but to fail to give Sweden any credit is sad.

If you’ve been around, you know it’s a pattern with Solo. Way back in 2012, Jenna Pel of All White Kit (where I used to write) had this wonderful take on Solo and her behavior that is still largely relevant four years later. And the gamesmanship before the final Swedish penalty kick was also a little ridiculous. She is one of the best (if not the best) goalkeepers of all time, so it’s a shame we have to keep talking about this stuff, but here we are.

At least Hope kind of apologized after the fact and didn’t say she was misquoted or anything. And as Seattle teammate Jess Fishlock pointed out, a couple of minutes after one of the most devastating defeats of our lives is not when we’re most rational.

This was the full context of my comments today. Thank you @GrantWahl. Losing sucks. I'm really bad at it. https://t.co/s5Mckg8o6B

Absolute frustration, 100%. Doesn't make it ok, why its always a tricky situation speaking to media when emotional. https://t.co/1UoppSfzAw