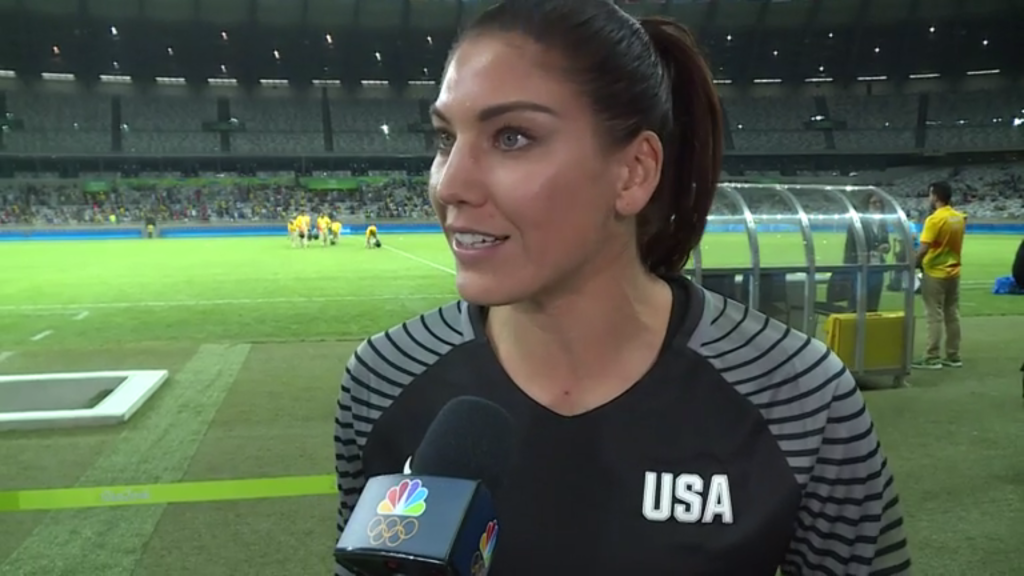 Hope Solo called Sweden “cowards” for how they played.

The U.S. lost to Sweden, 4-3 on penalty kicks following a 1-1 match after extra time.

“I thought we played a courageous game,” Solo told reporters postgame. “I also think we played a bunch of cowards. The best team did not win today. I strongly and firmly believe that.”

The comments were aimed specifically at Sweden’s tactics, which are deployed by Pia Sundhage, the Swedish coach who previously coached the Americans to their last two Olympic gold medals and a runner-up finish at the 2011 World Cup. Sundhage was part of a public tussle of words last year when the two teams met in the group stage of the World Cup. In an article published just before the two teams met, Sundhage called Solo “a piece of work” and referenced that she was a challenge to coach, “especially when it comes to trouble.”

[CURREN: USWNT made many mistakes, but it’s hard to win them all]

An always laid-back Sundhage was unfazed by Solo’s comments, figuratively pointing to the scoreboard.

“It’s OK to be a coward if you win,” she said. Other reporters interpret her comments in Swedish to say, “I don’t give a crap. I’m going to Rio; she’s going home.”

[MORE: Canada onto semis with 1-0 win as France wilts again]

Solo said on Twitter that “losing sucks. I’m really bad at it.”

This was the full context of my comments today. Thank you @GrantWahl. Losing sucks. I'm really bad at it. https://t.co/s5Mckg8o6B

The loss left the Americans short of the semifinals of a major tournament for the first time ever. There have been seven World Cups and the U.S. was won three of them, finishing second or third in the other four. The Americans have won four of the five previous Olympic gold medals, winning the silver medal in 2000.

UPDATE: U.S. Soccer president Sunil Gulati said Saturday that Solo’s comments were “highly inappropriate” and not in line with the Olympic movement.

I asked US Soccer president Sunil Gulati about his views on Hope Solo's postgame comments. He said this: pic.twitter.com/HKKf0albzY

The International Olympic Committee largely shrugged off the comments in a statement to Reuters:

“It is in heat of the moment. Passions run very high, people say things they then regret,” IOC spokesman Mark Adams said.

Media have had a field day with the comments, which has partly deflected the bigger issues surrounding the team’s play. U.S. media have largely taken Gulati’s position, that Solo’s comments are an embarrassment to the team, the broader U.S. Olympic team and the Olympic movement. That’s a strong and somewhat hyperbolic take.

Canada onto semis with 1-0 win as France wilts again
USWNT Things Learned: Lots of mistakes, but hard to win them all