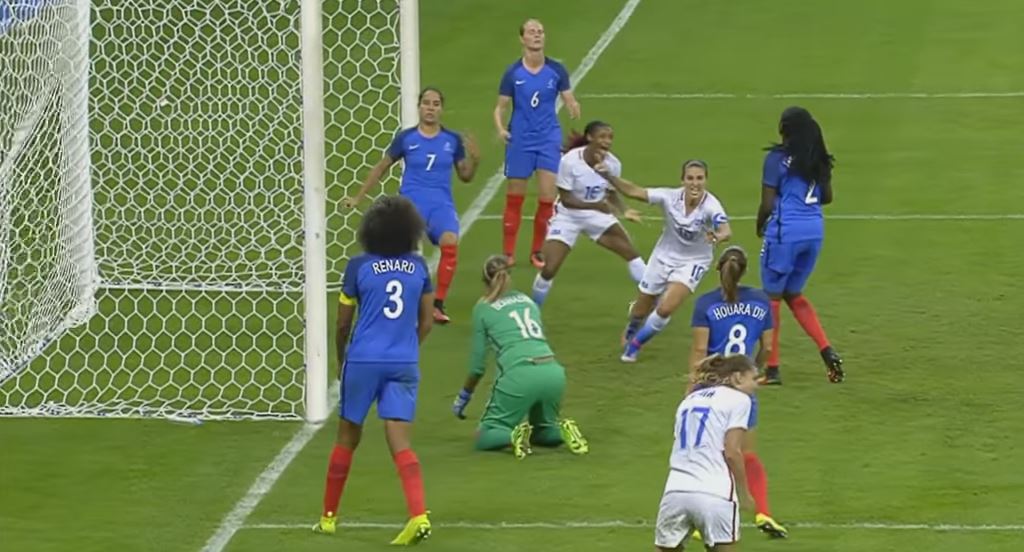 Carli Lloyd’s 63rd-minute goal held up to lift the United States women’s national team past France, 1-0 on Saturday and into the quarterfinals of the Rio 2016 Olympics.

Lloyd pounced on a rebound after Tobin Heath’s shot beat France goalkeeper Sarah Bouhaddi at the near post, bounced off the post and came straight to Lloyd in the middle of the six-yard box. The goal is Lloyd’s eight in two-plus Olympic Games, two fewer than all-time U.S. leading scorer Abby Wambach.

The star of the match for the U.S., however, was goalkeeper Hope Solo. Appearing in her record 200th international match, Solo made five saves – almost every one of them spectacular – to deny France from finding net. Les Bleues were dominant in the opening 45 minutes, but Solo denied Wendie Renard’s header with a tip-save in the 16th minute and then made a smothering save of Marie Laure Delie’s shot just before halftime, masterfully not giving up a rebound with other French attackers in the vicinity.

The United States’ best opportunity of the first half came at the 30-minute mark, when Bouhaddi tipped Tobin Heath’s 19-yard free kick over the bar.

Renard was everywhere for France, clearing crosses in the air and denying service with well-timed tackles in the open field. She was France’s best offensive threat, too.

Whitney Engen started at center back for the U.S. alongside Becky Sauerbrunn as usual starter Julie Johnston dealt with a sore groin. Crystal Dunn was the only other change for the U.S. from Wednesday’s 2-0 win over New Zealand. Dunn stepped in for Mallory Pugh, who picked up an ankle injury on Wednesday. Lloyd also scored in that opener.

The U.S. sits atop Group G with two wins from two matches. Australia’s 2-2 draw with Germany, which went final shortly after the U.S. beat France, means that the U.S. is guaranteed to advance to the quarterfinals of the Rio 2016 Games. The Americans are three-time defending Olympic gold-medalists.