Day 2 Olympic preview: How much does USWNT-France clash matter? 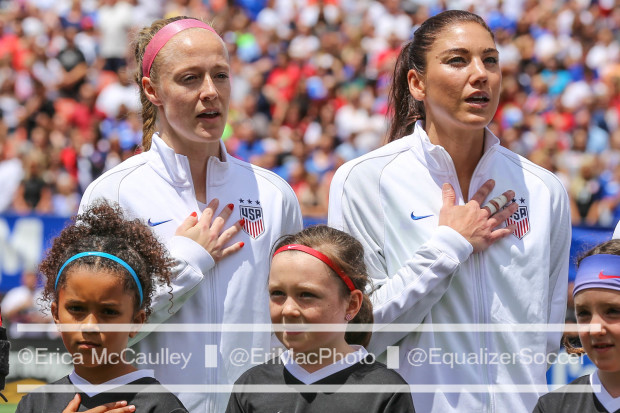 The Opening Ceremonies of Rio 2016 finished up Friday night and by Saturday afternoon, we’ll have a pretty good idea who is headed to the knockout stage of the women’s soccer competition. Barring something unprecedented, the United States and France will be two of the eight teams involved in the quarterfinals on Friday (all four games are at different times, by the way, so if you haven’t, your schedule should be cleared for that day).

So the question is: just how important is the USWNT-France showdown on Saturday in Belo Horizonte? Well, it depends. The winner will likely take Group G, but is it going to be an easier route to the gold medal? It’s somewhat likely that the loser will be matched up with Germany (who can’t be happy about seeing either) in the quarterfinals, but followed by a semifinal against Sweden or Canada. The winner? Well, it could see Australia (or someone like China) in the quarterfinal, with host Brazil awaiting in the semis. So if you reeeeallly want to avoid Germany – who had a hard time with Zimbabwe until the final 30 minutes – it’s important. If not, meh.

(France may have a bit of an advantage with a draw, thanks to its 4-0 beating of Colombia, but that remains to be seen.)

Still, it may be an important matchup for France’s psyche. The French have been lauded as perhaps the best technical side in the world since all the way back in the 2011 World Cup, but have nothing to show for it, no Olympic medals, no World Cup or European final appearances. They also own a dreadful 1-15-2 record all-time against the United States, the win coming on French soil in February of 2015. Hopefully the hype doesn’t lead to what happened in their last meeting, a drab affair at the inaugural SheBelieves Cup that was finally won by an Alex Morgan goal in stoppage time. France actually led 2-0 after 14 minutes the last time they met at the Olympics (2012), but that just seemed to anger the USWNT, who won 4-2 and could have had a couple more.

Regardless of what happens Saturday, both teams hope they meet again in the gold medal match in a couple of weeks.

What else is happening in the Olympic women’s soccer world on Saturday? (all times Eastern):

What To Look For: Canada will win this game, but it’s a matter how much. Zimbabwe fought extremely hard against Germany, and even probably scored the goal of the match, a moment they’ll remember for the rest of their lives. Unfortunately, some of that hard competing also resulted in some late and dangerous tackles that might have gotten a couple of them sent off in a more tightly officiated match and likely ended the tournament of Germany’s Simone Laudehr.

It leaves John Herdman a bit of a dilemma, exactly how many players to rest and be assured of victory (as well as a healthy goal differential they might need to win the group)? With Shelina Zadorsky suspended (red card), he’s already forced into one change, and we might see Christine Sinclair, Woman of the Match against Australia, start on the bench. He might also give Rhian Wilkinson, Diana Matheson, and Melissa Tancredi (all veterans in their 30s) a break in preparation for Germany. But what if Zimbabwe hangs around as it did against Germany? We shall see.

What To Look For: France came out on a mission Wednesday, although it was tough to get a read on whether they were that good or Colombia was that bad. The U.S. has hinted that it might be wise to let France have the ball at times and counter them through Alex Morgan, Crystal Dunn, and whatever other speed the USWNT has at its disposal.

But a match like that will test the U.S. backline more than it has been in a while. But when France pressures high, there is usually plenty of space behind them for players to run into. As with every U.S.-France matchup, it should be a fascinating tactical battle.

What To Look For: The computers raised Germany’s odds of winning a gold medal after their opener, but they did not look good for large portions of their game against lowly Zimbabwe, and if it weren’t for some poor goalkeeping and a tired opponent, that match could have been close until the end. And they should be up against a fairly desperate Matilda squad that looked baffled after going behind early, even a player up for most of the contest against Canada.

Alen Stajcic was trying to be careful with Sam Kerr, only letting her play 45 minutes, but Australia was a different team when she left the field and not nearly as dangerous. Stajcic also didn’t bring Lisa de Vanna on until late, which makes his lineup decisions Saturday very difficult. The Matildas can still advance with a loss by pummeling Zimbabwe, but it would make their path much more difficult.

What To Look For: While this might be the game to skip when you’re flipping around the dial, it is essential for both these clubs if they want to advance (remember, China went to the quarterfinals of the World Cup last summer). While I’ve been wrong many times before, the first goal here will likely be the winner, as neither features much of an offensive threat.

South Africa was very organized defensively in its opener, and looked more dangerous when Jermaine Seoposenwe was moved to the middle of the field. Neither goalkeeper looked too comfortable in their opener (remember that Bruno Bini’s spat with Wang Fei led her to retire from international competition), and that could be a big factor.

What To Look For: Colombia was lifeless and barely put up a fight against France. Is that the result of their tumultuous, yet largely inactive year between the World Cup and Olympics? New Zealand surely hopes so. But the Ferns certainly don’t have the firepower that France does and the longer a match like this goes without New Zealand scoring, the more (badly needed) confidence that Colombia should gain.

And we know Colombia has a few people that can trouble New Zealand like Lady Andrade and Catalina Usme. At some point, the pride factor has to kick in and we’ll see Colombia (the crowd seemed desperately trying to get behind them, but never really got a chance) spring to life as it did last summer. But if New Zealand can keep them down, they’ll likely get their second-ever victory at a major international tournament.

What To Look For: Sweden struggled desperately to break South Africa down, but did not look completely terrible other than that Wednesday. Of course, you could say the same about last summer’s performance, which is what they’re so afraid of. This game might be worth it just for the Lotta Schelin vs. Marta matchup, but for both teams, it may be their youth that is key to their success, even if most of both squads include many veterans.

In fact, Cristiane appears to be in excellent form and the Brazilian back looks line much improved over previous editions. It will be interesting if the Houston Dash’s Andressa (or Andressinha) starts, her insertion seemed to push Brazil from a regular victory to a comfortable one in the second half against China. Sweden is certainly capable here, but they’ll need to be much better than Wednesday.