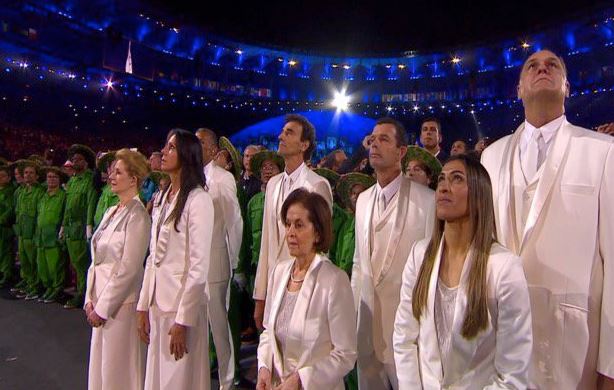 Olympic soccer players often aren’t able to march in the Opening Ceremony, since the sport – more than any other each Olympiad – is spread out among cities hundreds of miles outside of the host city.

So fans tuning into Friday’s Opening Ceremony of the Rio 2016 Olympics didn’t get to see the United States women’s national team march with their U.S. colleagues — 554 in total, including the U.S. women — since the Americans are in Belo Horizonte, some 300 miles north, preparing for a massive showdown against France on Saturday. So the U.S. women tweeted their thoughts from afar, knowing that the more important task lies ahead on Saturday.

Watching the #Olympics Opening Ceremony and wishing I was with @TeamUSA! But we have business to attend to tomorrow! #USAvFRA #BeloHorizonte

Canada’s women’s national team stole the social-media show, however, performing their own pseudo Opening Ceremony march in what appeared to be the team hotel before watching the procession on TV:

Canada's Women's National Team couldn't be in Rio for the opening ceremony – so we staged our own! #canwnt #TeamCanada #rio2016 #cbcsports #cbc #saopaulo

But some women’s soccer players were at the Maracana Stadium in Rio de Janeiro on Friday, none more prominent than five-time FIFA World Player of the Year Marta, who helped carry in the Olympic flag.

Marta is one of eight people to carry in the Olympic flag. Respect. #Rio2016 #OpeningCeremony pic.twitter.com/sGG5GHsjV7

Marta, 30, hopes to lead her country to Olympic gold on home soil.