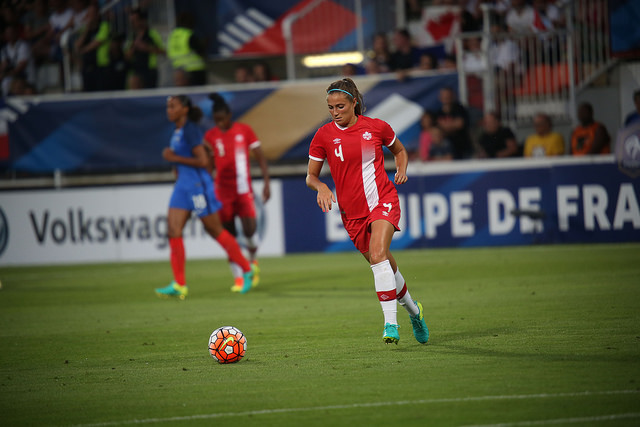 Canada’s exciting 2-0 victory over Australia on Wednesday to open the Rio 2016 Olympics was a roller-coaster of excitement.

The match had everything and was the top highlight among the opening fixtures. Canada was able to stay in front when Janine Beckie scored the fastest goal in Olympic history (20 seconds) and hold off the Matildas despite playing down a woman for 71 minutes. Canada’s young players proved that they are ready to perform at a high level, Christine Sinclair was her usual self, and Stephanie Labbe answered at least some lingering questions in net. Next up, a win against Zimbabwe in Sao Paolo on Saturday will send Canada to the knockout round, but for now here are three talking points from Wednesday:

Canada’s depth shone through against world No. 5 Australia in the Group F opening match for both teams at Rio 2016. Goal-scoring depth was on display with Beckie scoring the fastest goal in Olympic tournament history, just 20 seconds into the match. Shelina Zadorsky’s sending off forced coach John Herdman into making a defensive substitution in the 23rd minute. Rebecca Quinn came on, stepped up and showed that she is capable of playing important quality minutes against a top opponent. The 20-year-old center back was outstanding and did not look out of place next to Kadeisha Buchanan.

In past tournaments, it would be shocking to see Sophie Schmidt starting a group stage match on the bench. But Canada’s midfield options allowed Herdman to play a tactical game and bring on the veteran Schmidt in the second half for Diana Matheson. Canadian fullback Allysha Chapman was able to come on for Rhian Wilkinson before the second half to help solidify Canada’s back line. Wilkinson had some troubles on the slick pitch in the opening half and that depth once again allowed for a timely substitution.

Sinclair didn’t have to do everything against the Matildas. Canada’s victory was a strong team effort from start to finish. Having a versatile roster with plenty of options going forward shows that Canada is not just a one-trick pony with Sinclair to do the heavy lifting – an important point in what is likely 33-year-old Sinclair’s last Olympics. Balancing minutes, keeping players fresh and health will go a long way in a short tournament like the Olympics.

Josee Belanger was terrific for Canada at the 2015 FIFA Women’s World Cup. Her ability to play forward or full-back gives Canada another great option. Teams like Zimbabwe, Germany and future opponents won’t be able to game plan for just Sinclair, Matheson and Beckie. Canada has many different options.

Herdman spoke highly about his young players stepping up and performing on the big stage.

“In those key moments, Fleming, Lawrence, Buchanan, Quinn, Beckie, they were outstanding,” said Herdman. “Then you see the experience of the senior players guiding them through. We have been cultivating a culture of grit where they have been pushing each other and challenging each other. We said, in this game, anything can happen, it’s a tight game between two tight teams. It did. Everything did happen (although) I didn’t expect it to happen in the first 20 minutes.

“It bodes well because something like that can only bring our team tighter together and prove that we can handle the good and bad. For the next two games we are set up (after) three points from this game (against Australia), so we can now look at our resting strategies and make sure that our players are ready for the next big games.”

Stephanie Labbe was under siege of pressure in the first half with Australia doing everything but scoring after Zadorsky was sent off. The Matildas had 60 percent possession in the first half with six shots on target. Labbe had difficulty catching the ball on crosses and at times was in poor position. She did, however battle, stand tall, and maintained focus in net. She was a leader for Canada’s youthful back line and also had what we can only imagine were positive words for Zadorsky when she excited the match.

Australia did Canada plenty of favors by missing the frame time after time, but much more credit should be given to Labbe for keeping composure and holding the fort. Getting into halftime with the lead allowed Canada to regroup and come up with a second half tactical plan and that made all the difference.

“I think coming into half time, still up 1-0 (despite being down a player) was huge for us,” said Christine Sinclair. “Our coach just brought us all together, gave us simple tactics and a plan (on which) we had worked before. It was just staying to the basics. On the counter attacks, we knew we were faster than them up top, so it was just a matter of taking advantage of a couple of chances and we did that.”

[LAULETTA: The Lowdown: Team talking points for the break]

For much of that second half, Australia looked like they had a player disadvantage. Canada’s not going to control and dominate a lot of teams, but if they can weather a lot of storms and depend on Labbe to make the big saves when she needs to, Canada’s goalkeeper will be the least of their worries at the Olympics.

The physical play that Canada is well known for was present from the first whistle to the last. Referee Stephanie Frappert could have easily given out a few more cards than she did in the opening 45 minutes. Desiree Scott, Buchanan and Ashley Lawrence had some big-time challenges. For the most part, both teams were allowed to play physical.

This is not always going to be the case when Canada plays a different team. The opposition will be ready and expecting Canada to use its size and strength to their advantage. Wilkinson and Buchanan are already on a yellow card each and Zadorksy will sit out against Zimbabwe on Saturday. Yellow-card accumulation could be a factor further down the line, which could be another test of depth.

Playing a physical brand of football is perfectly fine, but it could certainly be costly against an unfamiliar opponent new to a tournament like the Olympics. Zimbabwe delivered several crunching tackles against Germany; Simone Laudehr’s left ankle took the worst of those rash tackles.

In playing a young team like Zimbabwe you don’t want to see any injuries happen to either side because of physical play and the lack of player experience. There is a good way to tackle and take the ball of someone and a dangerous way that can cause injuries. Sitting a player who already has a bit of an injury could be a smart move by Herdman against Zimbabwe.