A look back at the Olympic openers 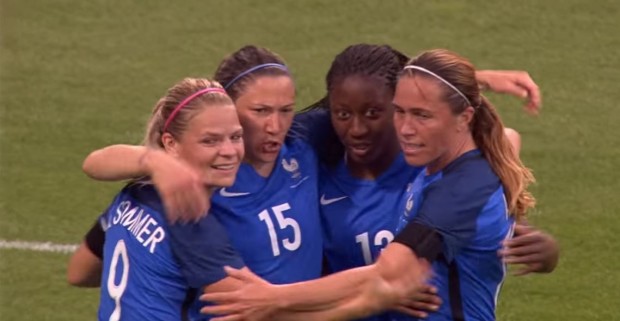 Match Day 1 of the Olympic soccer tournament is in the books. Here is a quick look back.

Before kickoff yesterday, perhaps the biggest question in Group E was how hosts Brazil would fare. After the first day of action, the green and gold look the part of medal contenders. The hosts stand on top of the group on goal differential following a 3-0 victory over China. Monica, Andressa Alves, and Cristiane all recorded a goal in the affair. For Cristiane, the goal was her record 13th in four Olympic competitions.

Sweden managed a dull 1-0 win over South Africa in the other group match Wednesday. South Africa was well organized and as predicted, made it difficult for the Swedes to score. With just over 15 minutes left, a cross by Swedish defender Nilla Fischer was mishandled by South African keeper Roxanne Barker for the game’s only goal. With three points, the Swedes are in second place in the group.

The winner of Group E will likely be decided Saturday when the two winners of Wednesday’s matches square off. Brazil will likely head into the match as the favorites given the team’s resounding win on Wednesday and Sweden’s less than convincing victory.

The Canada vs. Australia game was easily the most dramatic game of day one. Canada got off to a great start when Janine Beckie scored the fastest goal in Olympic history 19 seconds into the match. Things appeared to swing in Australia’s favor when Shelina Zadorsky was sent off 19 minutes in after denying Michelle Heyman an opportunity. Despite the player advantage, the Matildas failed to capitalize. After a missed penalty kick by Beckie, Christine Sinclair added an insurance goal in the 80th minute for the 2-0 victory.

Germany meanwhile demolished Zimbabwe 6-1 in the other day one contest in Group E. Melanie Behringer recorded a brace while Sara Dabritz, Alexandra Popp, and Melanie Leupolz each tallied as well. The other goal for Germany came off an own goal. Zimbabwe managed a goal of its own by Kudakwashe Basopo in the 50th minute.

While Germany battered Zimbabwe as far as the scoreline went, Zimbabwe clearly outclassed by one of the best teams in the world, resorted to extremely rough play. The African side committed a number of ill-advised tackles. Most notably, a poor tackle by Zimbabwe led to Simone Laudehr’s early departure in the 19th minute of the match. Given the short turnaround between matches and small roster size, an injury or two can derail a team even of Germany’s caliber.

On Saturday, Germany will face Australia while Canada will look garner 3 points against Zimbabwe – by far the weakest team in the tournament. A win on Saturday will put Canada on the fast track to the knockout round.

The defending Olympic champions got off to a solid start with a 2-0 victory over New Zealand. Defensively, the U.S. held the Football Ferns to a single shot on goal. Carli Lloyd recorded the first goal of the contest in the 9th minute, heading in a feed from Tobin Heath. Alex Morgan then provided an insurance goal in the opening minute of the second half. All in all, it was a fairly convincing opening game performance from a team that has a history of starting tournaments slow.

{CURREN: What we learned learned from USWNT 2-0 New Zealand}

Perhaps the most intriguing part of the match was the Brazilian crowd booing Hope Solo every time she touched the ball. In the second half, the spectators chanted “Zika” at the American keeper when she took goal kicks apparently in response to social media posted by the 35-year-old about the mosquito-borne illness.

In the last contest Wednesday night, France got revenge for its shocking World Cup loss to Colombia. Les Bleues got off to a quick start when just over a minute into the match, Catalina Arias recorded an own goal. France added strikes from Eugenie Le Sommer, Camille Abily, and Amel Majri en route to 4-0 victory over Colombia.

The real test for Les Bleues will come on Saturday when France faces the number one ranked team in the world. France, after coming into the last few major tournaments a favorite to medal, have come up empty each time. If France is to find themselves on the podium in some capacity come August 19th, a win against the United States would be an important step forward and give them control of the group. Meanwhile, New Zealand will face Colombia in other action in Group F Saturday. The loser of this match will likely be packing their bags following the group stage.