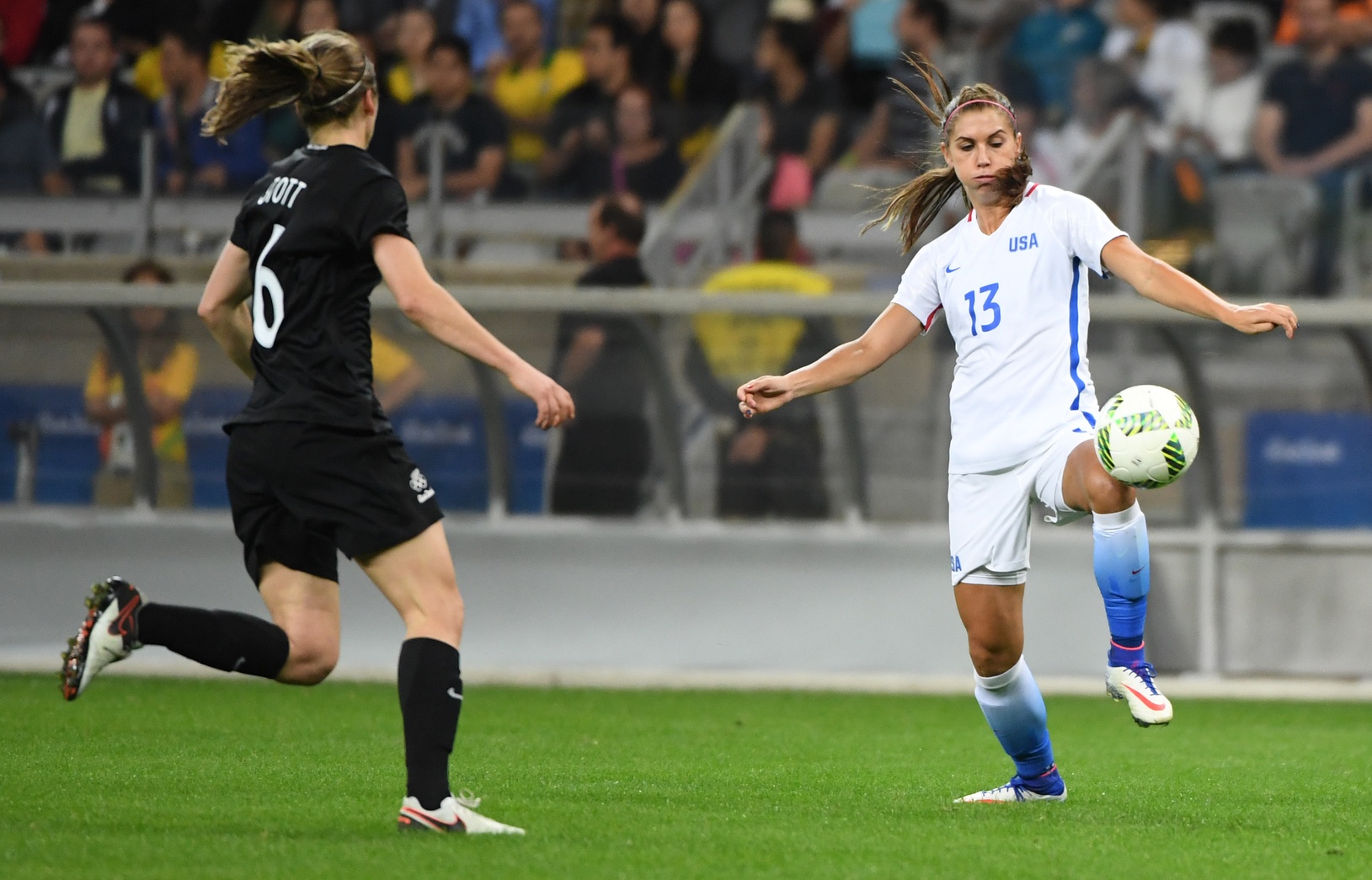 Alex Morgan scored 40 seconds into the second half to pad the USWNT lead on Wednesday. (Photo Copyright Patricia Giobetti for The Equalizer)

We’ve gotten to the point where we have to “nitpick” to find serious faults with the U.S. women’s soccer team. They are large favorites to win their fourth consecutive gold medal in Brazil, having added weapons like Crystal Dunn and Mallory Pugh to a team that dispatched of Germany and pummeled Japan on its way to a World Cup title last summer.

But “prohibitive favorite” does not equate to “100 percent sure thing,” which is one of the reasons why the USWNT Olympic lifetime record is so impressive. The U.S. was far from perfect against New Zealand in its 2-0 win Wednesday, it lacked the cutting edge we had seen in previous matches, allowed the Ferns a couple of dangerous opportunities that could have resulted in a goal conceded, never really was able to penetrate the middle of the New Zealand defense, and wasted a few set piece chances. New Zealand didn’t have enough of the ball to answer whether the U.S. can continue to get away without a true holding midfielder through another tournament. And yet they dominated anyway. Again.

Indeed, there was nothing Wednesday that should cause any alarms (except possibly a Pugh injury, she was pulled from the game early in the second half after a slight knock in the first that saw her off the field for a minute). Unlike in the recent past, the U.S. played attractive soccer and were able to dictate play without resorting to just playing the long ball repeatedly and/or waiting for a set piece. France will certainly be a step up and some big games that the USWNT could lose on a bad day await in the knockout rounds, but through one game in Brazil and now having seen everyone play, the United States still looks like the best team and on course for its fourth straight Olympic gold medal.

But there’s a long way to go.

1) Width can open up opponents

In theory, New Zealand’s 4-4-2 should have been able to neutralize the likes of Pugh and Tobin Heath on the wings, but – just as it has all year against everyone else – Heath, Pugh, and Crystal Dunn were a constant threat and at the same time pinned New Zealand’s outside mids back in their own end. If two people (an outside mid and outside back) can’t stop the talent the USWNT is putting in wide positions, then good luck. In the end, the Ferns committed 16 fouls and the U.S. ended up with 63 percent possession.

It will be interesting to see what France, likely in a 4-2-3-1, does? Do they pull their wings all the way back and leave their lone striker completely isolated? Or do they take their chances and hope that they can counter the other way if they get a mistake (as they did successfully against Colombia)? Whatever France has done recently hasn’t worked against the USWNT.

The 2-0 loss was only the second time since 2008 that New Zealand has been beaten by more than a goal at a major tournament with the other also against the United States at the 2008 Olympics. New Zealand tends to be organized and Abby Erceg continued her NWSL in-form play – albeit in a different position – with a solid game in an organized back line. Yet, although they are almost always competitive, they rarely win, in fact they’ve done so just once ever at a major tournament (2012 Olympics over Cameroon), compiling a pretty woeful 1-15-8 all-time overall record.

So again, we didn’t learn too much today, unfortunately.

We didn’t see the extreme high pressure out of the USWNT that stifled Germany and Japan at last year’s World Cup and did the same in the SheBelieves Cup in the late winter/early spring. There are some tactical theories why, it is a six-game tournament in a short time period (16 days), and you obviously want to hit your zenith at the end not at the beginning (which they certainly did last year). After Carli Lloyd scored early, Wednesday’s game never really appeared in doubt, so there was no need for Jill Ellis to push the issue too much.

It will be interesting to see how Ellis and the USWNT come out Saturday against France, who has been particularly susceptible to high pressure in previous meetings. We’ll also see how much Ellis rotates her players, she certainly has the depth to do it if she wants, although if Pugh is out and Megan Rapinoe isn’t ready to go, they are down to 16 temporarily.

3) Set pieces will be key

I’m no genius, but I swear that I’ve been telling everyone that Julie Johnston runs near post on almost every U.S. set piece, yet somehow she’s open several times a game. She was again in just the 4th minute here off a corner and only a good, but somewhat lucky stop from goalkeeper Erin Nayler (the ball hit her from close range) kept Johnston from scoring. Abby Wambach has retired, but there are plenty of weapons for the U.S. to succeed through set pieces, whether it be Johnston, Lindsey Horan, Lloyd, even Becky Sauerbrunn, not to mention that Tobin Heath’s delivery on said set pieces seems to be getting better and better.

How did the U.S. get the corner that led to the Johnston chance, you ask? Pugh wreaking havoc down the right side, of course. So that talent on the wings creates another dilemma. Heath, Pugh, Dunn, etc. are so good on the ball that you foul them at your own risk as well.

I guess Hope Solo got some Brazilians a little more upset than we thought by putting pictures (seemingly slightly tongue in cheek) on social media of the lengths she was prepared to go to protect herself from the Zika virus, which does not appear as serious an issue as it did a few months back.

The chant and boos got louder and louder as the game wore on, and to be honest, I had the same reaction that Solo did afterward, that – as long as it’s within reason – a story like that will be largely be good for the women’s game and create quite the atmosphere should the U.S. and Brazil (who looked good Wednesday) meet down the road. I do think giving Hope Solo extra motivation could end up poorly for any future opponents, however.

Just spoke to Hope Solo about being booed by fans at #USAvNZL. Says she’d rather it be loud than quiet (paraphrasing). #USWNT #NWSL #Rio2016

If anyone in the village forgets to pack repellent, come and see me…#DeptOfDefense #zikaproof pic.twitter.com/x8RdUV6M7c

Lloyd, Morgan comfortably lift US past New Zealand
A look back at the Olympic openers