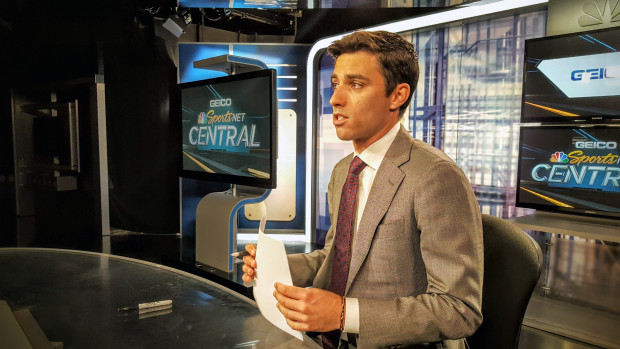 When the United States women kick off their bid for a fourth consecutive gold medal Wednesday on NBC Sports Network, one of the voices on the broadcast will be familiar to NWSL fans, particularly those loyal to the Houston Dash. Sebastian Salazar did play-by-play for the Dash’s inaugural season in NWSL before his career sent him back to the Washington, D.C. area. But the women’s game has never been far from his heart, and pitching in on Olympic television coverage is Salazar’s second significant WoSo project of the year.

“I’ll be doing pre and post game interviews,” he explained in a recent interview before departing for Brazil. “The way the Olympics is set up there is not really a space for a sideline reporter in a traditional American sense. So I won’t be doing hits within the game. I’ll be doing a pre-game interview with Jill (Ellis) and then all of the postgame interviews with the players as the exit the field.”

That might not sound like much, and it likely won’t be, but Salazar and the television team will be with the U.S. as long as they’re alive in the tournament and will be producing interviews and web content during off days. The assignment is a dream come true for Salazar, who learned soccer from his mother and has recently begun producing and narrating an NWSL highlights package for CSN Mid Atlantic.

“I told them I would sweep the floors in Rio,” he deadpanned about heading to his first Olympics. “But I kind of mentioned, ‘hey soccer is my favorite and the women’s game is one that I happen to know pretty well.’ And honestly, I thought that the women’s game would be a more valuable asset to NBC than the men’s game just in terms of interest. A few months later they called and said ‘would you want to be the sideline reporter for the U.S. women’s team?’ I tried to play it cool.”

Salazar dipped his toe in the women’s game by doing some work on Washington Freedom broadcasts during WPS where he worked with current Washington Spirit play-by-play man Michael Minnich.

“Once you start calling the games and you really start researching the league and learning the players, at that point you pretty quickly get into it. Of course, when WPS folded there was a drop off for me in terms of the interest in the professional level of it.”

Not long after WPS began collecting dust, Salazar was hired to help launch CSN Houston which was set to have a significant Houston Dynamo presence. Soon thereafter the Dynamo launched the Dash as an NWSL expansion club.

“I just kind of raised my hand and nobody else did as quick,” he said of landing the Dash play-by-play gig. “It was just awesome.”

Deeper business interests reared their head at the end of the 2014 and CSN Houston was no more. Salazar returned to the D.C. area where he remains an anchor for CSN Mid-Atlantic. And earlier this year, they accepted his pitch to produce a weekly NWSL highlight video.

“It’s doing really well,” he said without delving into specifics on numbers. Salazar said when he approached his bosses about the project they went along with it on his suggestion, but stopped short at saying they were enthusiastic. “They pretty immediately were like, ‘okay we need to keep doing this thing because we don’t throw a video out online and have it get this kind of traction on its first time very frequently.’ I’ve been thrilled with it. The public has responded very well. And internally, it has opened some eyes about what women’s soccer is capable of drawing. I would say it’s been a smash success.”

To that end, Salazar says that Sunday is his favorite day of the week as he pores through NWSL highlights and prepares the voiceovers to recap the NWSL weekend.

When next he does it, the Olympics will be in the books and amazingly, this is the first time a professional league has been operational in an Olympic year. The impact is not likely to be on a par with the temporary explosion we saw after the World Cup last summer, but Salazar is bullish on the future of the game.

“Each of (these) tournaments throw more mainstream, big media moment, women soccer images into the conversation. I think the Olympics will be smaller than the World Cup because there’s so many other things to distract. But this will be back to back summers of (major tournament) women’s soccer rolling into a full year of all of those stars in your backyard in a league that is settled, doing well, growing its attendance, and has a large, vibrant online community that helps spread the word. I think we’re going to hit another high water mark.

“Selfishly and somewhat hopefully, I really believe NWSL is in a very, very strong position in terms of what’s coming for them.”