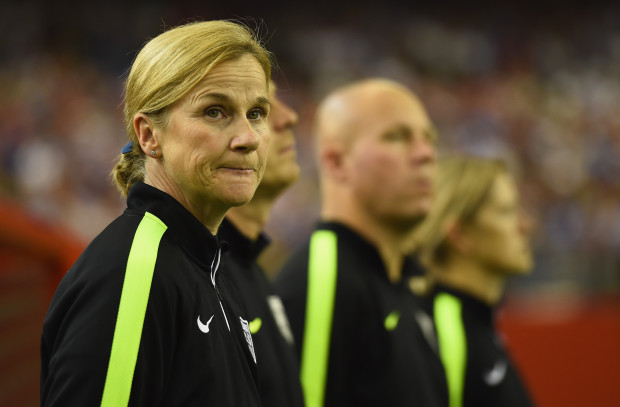 Jill Ellis will try to join Toy DiCicco as the only coaches in the women’s game to win a World Cup and Olympic gold. (Getty Images)

Shortly after the final whistle blew in Vancouver last summer, many women’s soccer fans began waiting for the start of the Olympics in Rio. Since the wait is nearly over, here’s a quick preview of the first set of matches for the tournament.

It will be a bit of deja vu for these sides on Wednesday when they kick off the women’s soccer tournament in Rio. They met in their opening game of the 2012 Olympics which Sweden handily won 4-1. Sweden is looking to rebound from a disappointing World Cup campaign in which they managed only draws in the group stage. The Swedes have the talent necessary to garner three points in this match.

Expect goals to be difficult for Sweden to come by, as South Africa showed that in a recent friendly against the United States, they can keep their shape and stay organized against a quality opponent. Just as noteworthy, four years ago the team managed a scoreless draw against eventual silver medalists Japan.

At this point, fans should know what to expect from the hosts – a lot of flair without a lot of organization or discipline. In the last several major tournaments, Brazil has come up empty. Now at home, with the pressure to medal on them, how do they respond?

Last December, Chinaended the U.S.’ 104 game winning streak. Of course, the game was an emotional one for the reigning World Cup champions as it was Abby Wambach’s last game for the stars and stripes. After that game however, Steel Roses went on a ten plus game winning streak before losing to France and Canada. China is a team still trying to reestablish itself on the international scene. China has shown it can perform before with a hostile crowd to contend with, can the team do it again?

The Canucks vs the Aussies should be one of the most competitive games in the first day of action in Brazil. Canada is looking to rebound from a disappointing World Cup at home and has introduced some new talent especially offensively hoping to jump start an attack that stalled last summer. A fully healthy Diana Matheson should also help Canada turn the page on last summer.

Australia was one of the success stories coming out of the World Cup. Placed in the Group of Death, the Matildas emerged from group play to the surprise of many pundits before beating Brazil for the country’s first ever knockout win. Australia will rely on its speed to try to catch Canada off balance and nab a goal. Australia gave up only 5 goals in 5 games in the Olympics, so one tally may be enough for the Australians if Canada’s offense stalls again.

Germany walking away empty handed last summer has to be one of the biggest failures from the 2015 World Cup. Despite the retirement of high-profile players such as Nadine Angerer and Celia Sasic, Germany is still one of the most potent sides in the tournament and is expected by many to finish in medal position. Zimbabwe, on the other hand, is an unknown quantity without much exposure at the international level. This game could be one, if not, the biggest blowup of the group stage of the games.

In London, New Zealand made history by advancing past the group stage in a major tournament for the first time. The United States quickly spoiled the Kiwis’ fun in the knockout stage, sending them packing with a resounding 4-0 result. Although, the United States’ roster is very different from last year’s World Cup, the team looks much improved offensively as Crystal Dunn and Mallory Pugh have stepped up into important roles in the attack. Add in a healthy Alex Morgan, and it’s a tough first assignment for any team in this tournament.

New Zealand will come into this game looking to play spoiler without much expectation outside the team and staff. The Kiwis are one of the most experienced sides present in Rio, especially on the defensive end. Anchored by captain, Abby Erceg, every member of the New Zealand backline has reached the century mark in international caps. On paper, the United States should win this match handily, however, given the U.S. penchant for starting tournaments slow, don’t be surprised if the scoreline is close.

Many have had these game circled on their calendars since the Olympic schedule came out. Last Summer, Colombia shocked the world when they beat France 2-0 in the World Cup despite being outshot 21-3. Don’t expect history to repeat itself as France will want to redeem themselves from perhaps the biggest upset in Women’s World Cup history. Given the quality and experience of the French side, it’s hard to imagine that France won’t walk off the pitch without three points Wednesday.

It’s also worth noting that Colombia will be without its biggest star Yoreli Rincon who broke her fibula in training last month. Also missing from the Colombia’s roster Daniela Montoya, who scored one of best goals of last summer’s world cup.