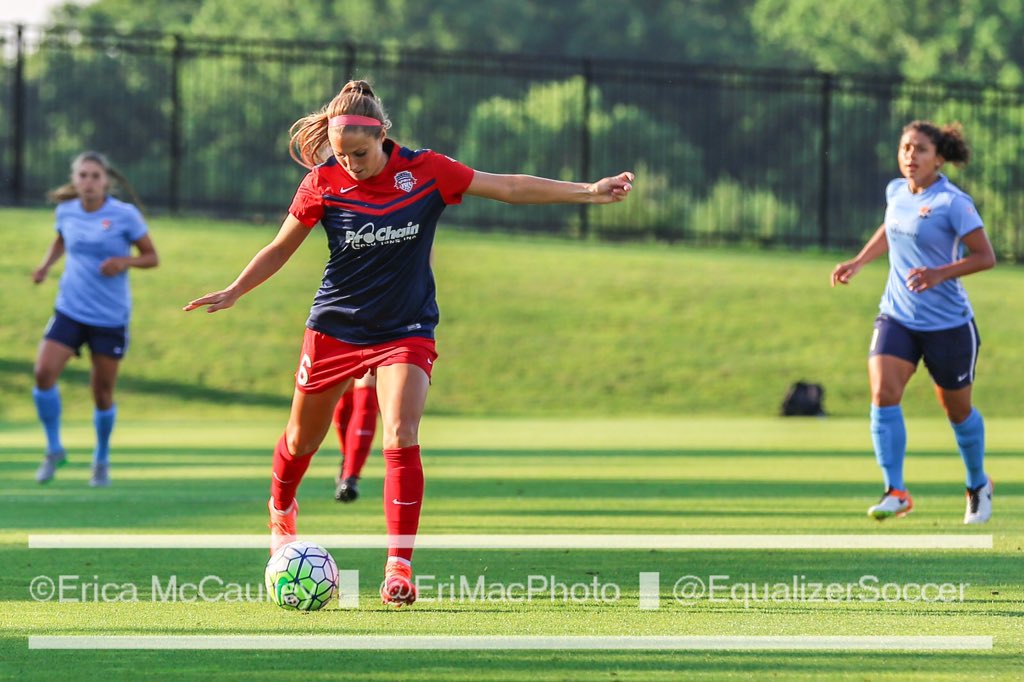 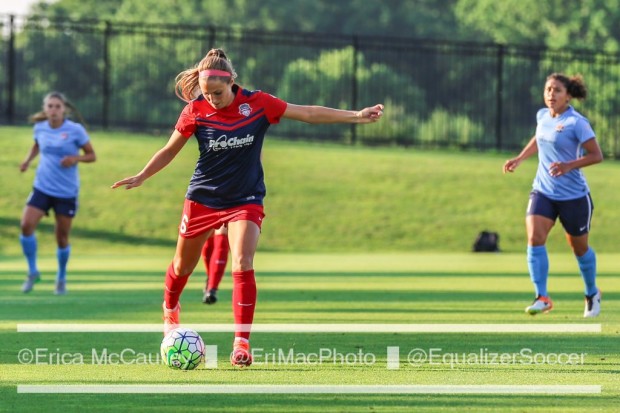 Four years ago Shelina Zadorsky was at Michigan. Now she is a defender for the Spirit and the Canadian Olympic team (photo copyright EriMac Photo for The Equalizer)

A third of the Canadian Olympic roster will be appearing in their first major tournament this August. While each of the fresh faces followed their own unique path to Brazil, perhaps Shelina Zadorsky had the most circuitous. After stops in Australia and Sweden, the 23-year-old was allocated to the Washington Spirit in the NWSL last February.

When her illustrious career at the University of Michigan, which included being an All-Big Ten selection twice, ended the center back entered the 2014 NWSL draft. Zadorsky didn’t expect to be taken since she would require use of an international spot, but admits it was a bit of setback when her name wasn’t called. It wasn’t going to stop her from playing though.

“I think I had some more developing to do before I could make that jump to the full team,” Zadorsky said about herself after finishing her collegiate career, “I just built my connections and was able to go play in Australia and then from there I played in Sweden and then I ended up here with the Spirit.”

The first stop for the defender was Perth Glory in Australia. Getting in professional game experience helped Zadorsky expand her skill set. Zadorsky found the challenge of speedy Australian strikers like Sam Kerr good for developing her game. Working alongside another Australian international, defender Alanna Kennedy was also a great experience for the young player.

From there, Zadorsku signed with Vittsjo GIK for the 2015 season. Playing in the Damallsvenskan brought with it an entirely different challenge for the London, Ontario native. In Sweden, teams play more of a possession game which requires a different style of defending.

All the while, Zadorsky was absent from the international scene. She made her debut with Canada in 2013 against South Korea, but didn’t earn another call-up with the team until almost two and half years later.

“I think I kind of pushed to get myself back in there,” Zadorsky said of the Canadian national team, “I kept myself in the realm and communicating with the coaches and just saying, ‘Hey look here’s game film from Sweden. I’m working and growing as a center back and I’m growing and playing against some of the best players in Sweden.’”

Zadorsky’s persistence paid off when she was contacted by the federation to represent her country in the Pan Am Games last July. She saw action at both center back and left back in the tournament, notching two goals in the process. Unfortunately, the tournament was disappointing for the hosts, who were kept off the podium.

So far the results with her new club team have been far from disappointing, however. Prior to departing the team to prepare for the Olympic games, Zadorsky had helped the Spirit record four shutouts in eight games played.

“It’s been amazing,” the center back said of her time with Washington so far, “It’s been incredible to play with such quality players and then coming into a new backline and working through that I think that’s a great challenge to go through having the likes of Megan Oyster and (Alyssa) Kleiner, Ali Krieger and Steph (Labbe) behind me, I think that’s all a good combination.”

Personally, Zadorsky has enjoyed playing in the league and the challenges it presents.

“I think it tests me as a defender,” she explained, “It tests my focus and my ability to defend quick, quick players, so I think now that I’m here I’m living it and I’m liking it. I think I’m growing with it as well but I think yeah it’s a good place for me to develop my passing, develop my one v. one defending. Overall, it’s been great.”

Speaking of a test, the defender feels the upcoming Olympic tournament will be a big test for her country after disappointing results in the World Cup and Pan Am games last year. Canada wants to show that earning a medal as they did in London was not a “one-time thing.” She hopes the new faces on the team can help surprise the opposition offensively.

Four years ago, Zadorsky was at Michigan when Canada lost a heartbreaker to the United States in the Olympic semifinals. As devastating as it was to have the dream of playing for gold dashed, Zadorsky was proud of how her countrywomen responded in the Bronze medal game, earning the country’s first medal in a summer team sport since the 1936 Olympics in Berlin.

“Seeing the resiliency of that squad to go on and against France and then D(iana) Matheson getting that goal, I think that was just a big moment for Canadian women’s soccer,” Zadorsky continued. “Now that I’m a part of it, I’m just so honored to be a part of it, blessed to work with such quality individuals and players and that’s what I envision being back on that podium.”

Given the journey to bring Zadorsky to this moment, representing her country at the world’s largest sporting event, Zadorsky knows a thing or two about resiliency herself. Even though it was difficult at times, Zadorsky appreciates the path she’s taken to get here.

“I think anything, any reward that you get in life it comes from hard work and it’s all the more sweet, if you’ve worked hard for it,” she said reflecting on her journey thus far, “I continue to try my best everyday and I think that’s paid off, so to speak, but still I’m working every single day to be my best.”