Fischer, Sweden to lean on experience at Olympics

Nilla Fischer hopes Sweden can perform better at the Olympics than the team did at the 2015 Women’s World Cup. (Photo: FIFA/Getty Images)

Coming off hosting the European Championships in 2013, you wouldn’t have blamed Sweden for feeling confident going into the 2015 World Cup in Canada after appearing in the semifinals.

But no wins and a thumping 4-1 loss to Germany in the last 16 left a lethargic and out of form side looking for answers as to why they were unable to build on their last four appearance just two years earlier.

Defender Nilla Fischer, a linchpin of the current setup, was part of a team that was gripping a nation one moment in Sweden, and then left scratching its head the next in Canada.

As a result, she admits the team was lacking confidence going into the March mini-qualifying tournament that saw her squad book its place in Rio. However, she added the team benefited from having a fully fit side, something that hampered them last year at the World Cup.

“We didn’t play our best soccer, but we are very happy to have qualified,” she said.

“We didn’t go in with super confidence, but we knew we had the routine in the team and all our players were healthy, so we knew we had a good chance.”

Fischer chalks up the difficulties the team faced going into the World Cup to some defensive instability.

Pia Sundhage’s side conceded eight goals in their four matches in Canada, and Fischer says that is something they have been working on to ensure they are better prepared for Rio.

“You know your position is never safe, but Pia has been playing the same two center backs where possible, and I think that helps.”

“We don’t have to do a lot of talking because when you build up that relationship, you get a good understanding of your roles.”

Despite the failings of 2015, Sweden still has plenty of quality to call upon, was many in the squad were members of the 2012 Olympic roster.

The Swedes topped a difficult group in London, finishing above eventual silver and bronze medalists Japan and Canada.

France would go on to knock them out at the quarterfinal stage, but the Wolfsburg defender says they can take positives from their experiences in London, and apply the lessons learned to Rio.

“The more experience you have, the easier it is to deal with every situation.”

“The Olympics is an event that can take a lot of energy if you are not focused, so we know we have to be on our game, every game, if we want to progress into the latter stages.”

If Sweden progresses to those latter stages, Fischer could reach a landmark 150 caps for her country, which is currently only topped by Lotta Schelin and Caroline Seger in the current squad.

With that experience, she admits that she now has to take on a bit more responsibility.

“I always try to play my normal game and be the person that I am, but of course, I need to take on a bit more with the other senior players.”

“It’s important to help the younger players, especially in environments like the Olympic village, while reminding them why we are here, which is to do well and try and win.”

The journey to the Olympic final will begin against South Africa in Rio at the Olympic Stadium, a team they defeated 4-1 four years ago in London.

But it’s the match against the hosts that Fischer is particularly looking forward to, admitting it will present a great atmosphere, and an even greater challenge. 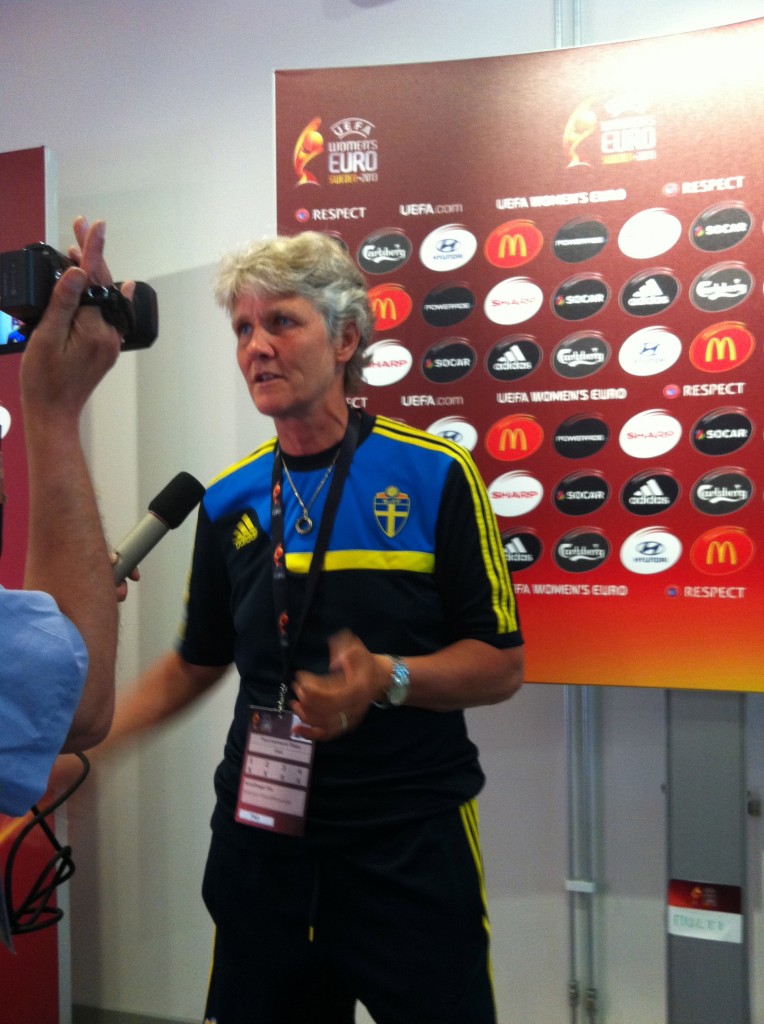 “It’s going to be very exciting to play against Brazil, especially with the crowd that will be there. It’s also always good to come up against a player like Marta.”

As for the two other teams in the group, Fischer is in no way playing down the challenge they present.

“With South Africa, we’re going to be relying on our scouts and on paper we should win, but it won’t be easy.”

“I don’t know a huge amount about China, but they are a team developing, so it will be a tough match.”

When Sweden clicks, it can match the best in the world – despite the team’s poor World Cup, they were the only team to prevent the United States from winning a match.

With a good blend of young and experienced players, there is no reason why the team cannot push for a medal.

However, Fischer was not willing to make any bold predictions, only that the team would be giving their all.

“We dream of winning the gold, but we have to perform at our top level if we want to win a medal.”

“The first step is to get past the group stage, and then every game is 90 minutes at least, so we’ll see what happens.”