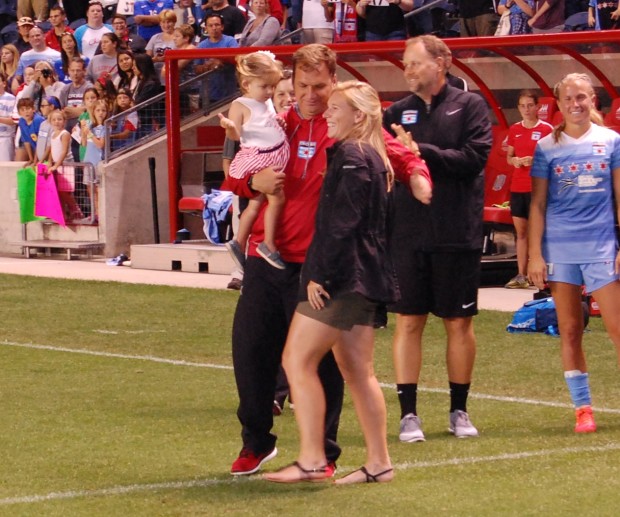 In December, following a prolific professional and international career that spanned 15 years and included a World Cup championship and an Olympic gold medal, Lori Chalupny called it quits.

On Saturday, the Chicago Red Stars honored their former midfielder by retiring her jersey in front of 2,550 fans at Toyota Park.

Speaking to The Equalizer, Chalupny called the recognition “an incredible honor” and said, “It means a lot to me to show that I’ve had an impact on the organization.”

“The four years I was in Chicago were probably the best four years of my soccer career,” she later added. “From the organization [at] the top, the coaching staff, my teammates—everything that surrounded the Red Stars organization made it a really special place for me to play. It definitely holds a special place in my heart.”

Red Stars general manager Alyse LaHue explained that the decision to honor their former captain came easy because Chalupny so closely represented the values of the team.

“She epitomizes what our ideals are as a Red Stars organization, this idea of being a blue-collar team, being a gritty team, being very representative of the Midwest, of Chicago as a city,” said LaHue. “She epitomizes those things that we want to be as a club and the things that we aspire to be. She’s very humble, she’s extremely hard-working, she’s unbelievably competitive and she’s a great leader.”

Chalupny’s tenure with the Red Stars included a four-year stint going all the way back to the team’s days in the WPSL. There, she led the team to the 2012 WPSL Elite finals and set the foundation for a great relationship with the Chicago organization.

“If you go back to the way she joined the club, it was back during the WPSL Elite, that was the year that a lot of those very high-level performing pro players had an opportunity to sit out, or go look for something abroad,” said LaHue. “For Lori to choose to stay in the U.S., to stay in the Midwest, to choose to come to Chicago—that league wasn’t fancy, it wasn’t high paying, obviously the standards were much different than any of our professional leagues—but she came in and treated it as any other professional league and professional team.”

Head coach Rory Dames echoed those comments and noted that Chalupny was part of an early group of leaders in Chicago, including Leslie Osborne, Shannon Boxx and Karina LeBlanc.

“You can’t have teams that accomplish something if you don’t have really good leadership at the top,” said Dames. “She set the foundation of what it means to be a Red Star. I told [the players] before the game, if somebody says, ‘What’s a pro? What’s a Red Star?’, Lori’s the first thing that pops into my head.”

Chalupny stayed with the team when it joined the NWSL in 2013 and won Best XI honors that season. In 2014, Chicago chose the University of North Carolina alumna as their team MVP and in 2015, Chalupny helped lead the Red Stars to their first-ever NWSL playoff appearance.

Since hanging up her boots, Chalupny has slid into civilian life without much difficulty. She is currently serving as an assistant coach at Maryville University in her hometown of St. Louis and is slated to take over the head coaching role there in 2018.

“I’ve been really fortunate. It isn’t common that people get to step away from the game on their own terms when the time is right for them,” said Chalupny. “Having that opportunity really made retirement easy for me. I’m able to step away on my own time. I felt good about the decision and now I get to move on and do something else that I love. Retirement’s been good.”