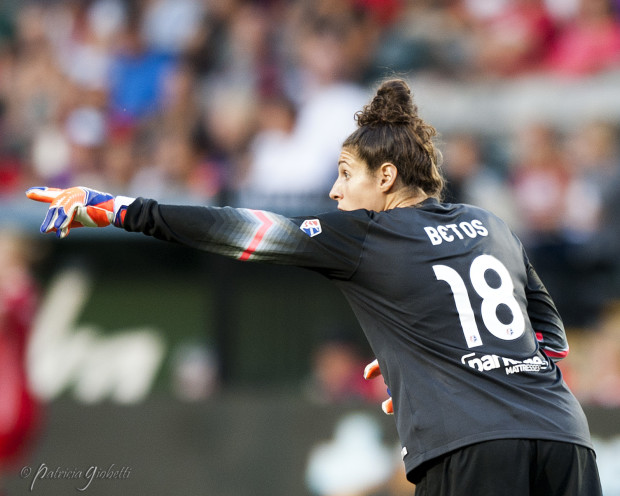 After this weekend, the NWSL will go into a four-week break for the duration of the Rio Olympics, the lone exception being a rescheduled match between Washington and Houston the night before the gold medal match. The top teams are looking to cement their playoff positions, a number are jostling for the fourth spot, and a few are desperate to keep from being eliminated completely. With three rivalry games on the schedule, Week 15 is here.

The first two matches between these teams this year ended in draws, including one without nearly half of Portland’s regular starting lineup. Always a fierce battle between the only two teams in the NWSL who can truly be called rivals, both sides enter Saturday’s game with a lot on the line. Although Portland remains at the top of the table by virtue of winning the head-to-head tiebreaker with Washington, the previously undefeated team lost two in a row (to the eighth and ninth place teams) before having last week off. They will look to silence any critics who say the team was built too much around its national team players by rebounding at home against a Seattle team who is still looking to regain last season’s shield-winning mojo.

While the Reign won last week in convincing fashion by putting four goals (and an Orlando own goal) on the board, it was against an Orlando squad that had perhaps its worst display of the year. The Reign have struggled on both sides of the ball but remain in the mix for a playoff spot, and depend on players like Kendall Fletcher to regain their form. A solid win in front of a hostile crowd could go a long way toward kickstarting a talented team who has looked flat and uninspired too often.

After missing time earlier in the season with an injury, Betos has since put on stellar performances that surely have her in the running for Goalkeeper of the Year (again). She has kept an oft-changing backline organized, and along with Adrianna Franch is responsible for keeping Portland tied with Houston for second-fewest goals allowed in the league. Should Seattle bring the offensive firepower they unleashed against Orlando, Betos will be in demand to keep her team in the game.

Every team has its linchpin, and the Scottish midfielder may be Seattle’s. Always lauded and rightfully so, Little has had an underwhelming season so far (by her standards). However, last week she scored the first goal for Seattle, albeit on a penalty kick, and that freed the Reign offense. The goal, by the way, made Little the first player in the league to reach 30 goals, despite not playing in the inaugural 2013 season. Although she contributed only two of the team’s 23 shots, she was a dynamic presence, and she could be the spark the Reign need. An in-form Little, whether creating opportunities deeper in the midfield or pushing high to score, can lead this team not only past Portland but, as the season winds down, into a playoff position.

Nearly everyone predicted Sky Blue to finish near the bottom of the table this season, but after beating Washington last week, the Jersey upstarts claimed the fourth place spot for themselves (going all the way to the third tiebreaker in order to surpass Chicago). The teams meet again immediately, and Sky Blue will look to do more of the same from last week’s match, letting Leah Galton run rampant along the left wing while Christie Rampone and Kristin Grubka keep nearly anything from coming Caroline Casey’s way. Washington, although several points clear and a game in hand over Sky Blue, was not the better team last week, sitting on their heels and allowing Sky Blue to control the match. Jim Gabarra may need to make some tactical adjustments in order find the energy, creativity, and organization necessary to prevent two losses in a row. In an attempt to stifle Galton, look for Alyssa Kleiner to return to the starting XI, while Christine Nairn needs to show a stronger command of the midfield. The possible debut of Line Sigvardsen Jensen could also be a difference-maker.

FC Kansas City has proved to be master of the upset this month, defeating two of the top three teams in the league. With Nicole Barnhart all but a brick wall in between the posts, Chicago will need to dig deeper than their customary one goal in order to take home a much-needed three points that could reclaim the fourth playoff spot from Sky Blue. Stephanie McCaffrey made her Red Stars debut last week, and although she had a disappointing sophomore season in Boston, Rory Dames could be hoping the change in scenery will return her to her 2015 goal-scoring ways. After knocking on Houston’s door numerous times last week, Vanessa DiBernardo is also itching for a goal. The Red Stars will want to keep an eye on Shea Groom, who has been pestering defenses with increasing efficiency this season. If Katie Naughton and Sam Johnson can shut her down, Kansas City may not have an offensive answer.

After a strong showing against Portland, last week’s Dash at first appeared to have fallen back into their old ways, giving up an early goal off a set piece and struggling to put shots on target. However, some second half adjustments along with the combined grit of Rachel Daly and Kealia Ohai allowed the Dash to pull one back and leave Chicago with a point. They’ll need to do that and more against a strong Western New York squad. Outside backs Becca Moros and Cami Privett will be put to the test to stifle the likes of Jaelene Hinkle (if recovered from an ankle sprain), Lynn Williams, and Makenzy Doniak, who helped the Flash to a franchise-high 24 shots last week. However, that didn’t prove enough to lift them past Kansas City. Expect the Flash to come out with high pressure to try and overwhelm the Dash defense, while Houston may rely on quick counters to beat Katelyn Rowland.

Orlando (without Leah Fortune) will finish up a two-game road trip on their first excursion to Massachusetts and hope to avoid a three-game losing streak in doing so. An own goal by Toni Pressley is perhaps the best example of last week’s embarrassing performance in Seattle, and the Pride will look to recover and go into the August break on a high note. Kaylyn Kyle has emerged as a leader in the absence of Alex Morgan and Ashlyn Harris, but the team needs more than her admirable determination to lead them to victory. Boston has certainly not forgotten their last game against Orlando, in which they let victory slip through their fingers by giving up two dramatic late-game goals. Redemption is on the menu and could be served by the debuts of Natasha Dowie and Ghoutia Karchouni. After trading Stephanie McCaffrey in a surprising move last week, Matt Beard will certainly be looking for his newest signings, alongside Eunice Beckmann and Louise Schillgard, to provide any sort of offense, while further back Julie King will need to hold together the Breakers’ defense and prevent a repeat of their last meeting with the Pride.