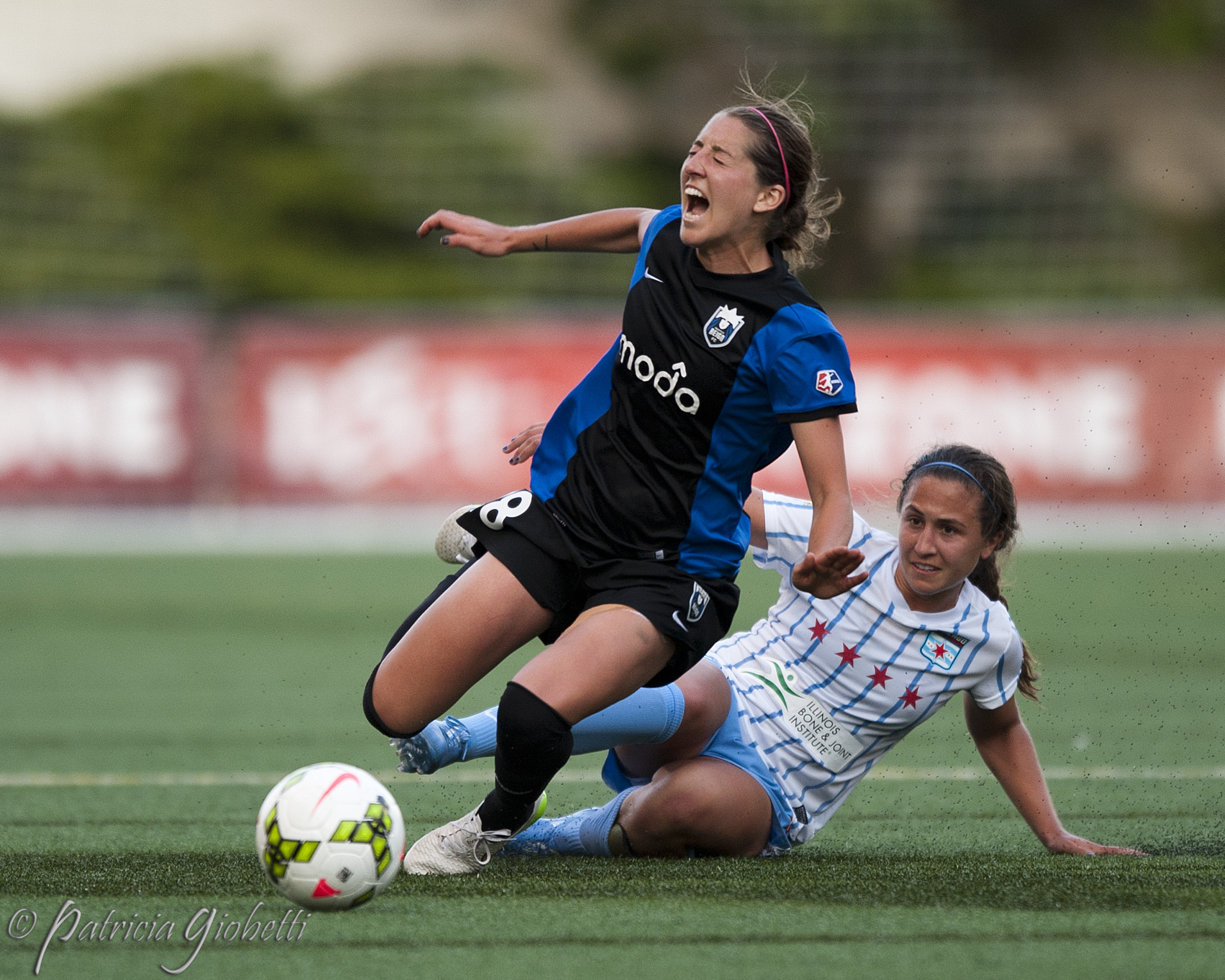 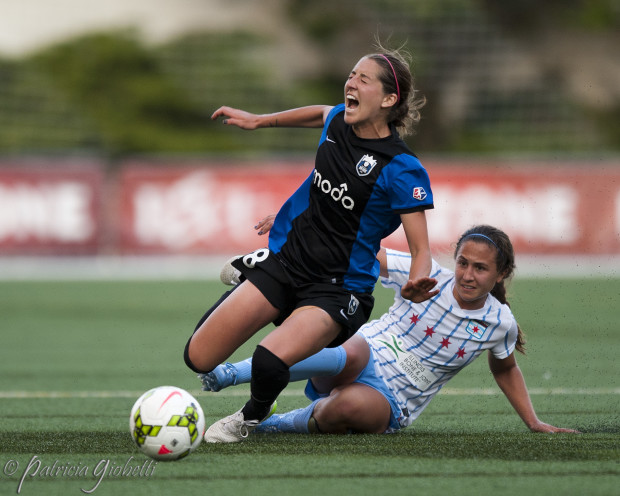 Danielle Colaprico (right)’s ability to in the ball in midfield makes the Red Stars tick. (Photo Copyright Patricia Giobetti for The Equalizer)

BRIDGEVIEW, IL. — After breaking out early on a second-minute goal, Chicago allowed a late equalizer by Houston to settle for a draw at home after four straight matches on the road. Here’s a look at some takeaways from the match.

Although Chicago and Houston are in considerably different places as far as the standings go, the clubs went into Saturday’s match in similar places. Each team had gone through difficult losing streaks previously and had broken them the week prior with wins.

Saturday night, the game ended in a deadlock because each side allowed a preventable goal. Albeit, it’s possible to say that every goal is preventable, but in the case of Saturday’s game, each goal was in large part the result of a mistake by the team defending.

On the Red Stars goal, the Dash seemed caught off guard by Danielle Colaprico initially lining up near post and then springing toward to the corner towards Vanessa DiBernardo to receive the short corner. Colaprico’s effort then ricocheted off a defender for the score.

Postgame Houston Dash captain Kealia Ohai praised her team’s resilience in fighting back from an early goal to earn a point. However, the North Carolina product blamed the goal on a lack of organization. “It’s frustrating again to get scored on a goal like that, where we weren’t organized and that’s just again being sharp and being focused…”

Houston’s late equalizer occurred when the Dash stormed up the field quickly, after collecting a loose ball, culminating in a composed finish by Daly. The Red Stars defense got stretched out on the play and although Daly had a defender on her, it’s not the type of goal a home team should concede in the late stages of a game while ahead.

“We shouldn’t get countered on in the 80th minute from box to box,” Red Stars coach Rory Dames said about the play, “It’s bad overall team shape and it’s bad balance.”

Houston head coach Randy Waldrum admitted his team was rattled by the second-minute goal and took a long while to settle in after that. Tactically, Waldrum made some changes that led to Houston being more dangerous in the second half.

One of the changes that Waldrum made was bringing Melissa Henderson on, first as a striker and then dropping her back to midfield. Normally, Henderson would have started the match, but a death in her family left the Notre Dame product’s focus understandably elsewhere last week.

Although it’s not the type of thing that shows up in the box score, Henderson played an important role in setting up Daly’s strike. She collected a loose ball, played it to Amber Brooks, and then quickly made herself available for the return pass. Henderson then found Ohai on the flank to really get the goal scoring opportunity started.

Daly was quick to praise Henderson for her efforts and positivity especially during a difficult time personally. “She’s a game-changer,” Daly said, “She turned it around for us and she was positive and came in and changed the game.”

Since her arrival in Chicago last year, Colaprico has been a force in the midfield for the Red Stars. Colaprico’s ability to read the game to stifle opponents’ offensively and connect passes when successful, were key in the Red Stars reaching the playoffs last season. The fact that she won Rookie of the Year despite playing a position that is oft overlooked, speaks to her importance to the club.

On Saturday, despite being covered with about an entire roll of tape on her knee and hamstring, Colaprico’s work rate was still remarkable. Postgame Rory Dames estimated that she was only 70-75 percent. Saturday, she showed that even at 70-75 percent, she’s still better than most others in her position in the league.

Although it’s difficult to think much past Rio right now in terms of the national team, Colaprico has certainly made a case for seeing some time moving forward.

“I think there’s 4 or 5 in our group that are on the cusp that when the Olympics are over if they can improve a few things they are going to have a legitimate shot of at least getting a look in the next cycle and she’s obviously one of them,” Dames said Saturday about Colaprico.