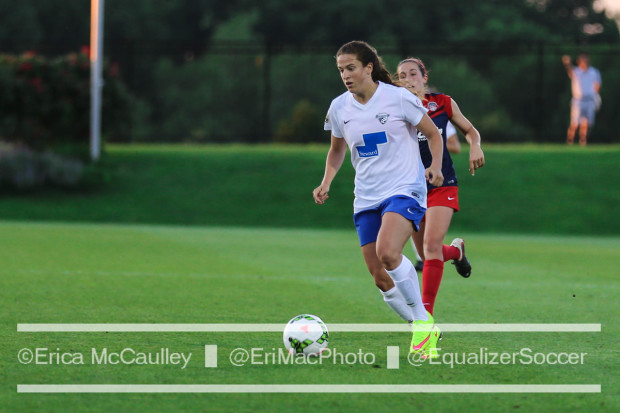 BRIDGEVIEW, IL. — Little more than 24 hours after arriving in Chicago, Stephanie McCaffrey made her Red Stars debut in the final minutes of a 1-1 draw with the Houston Dash. Shortly thereafter, she addressed the media about her move from the Boston Breakers to the Red Stars.

“It wasn’t a surprise because it was mutual,” McCaffrey said about the trade that sent her to Windy City Friday in exchange for draft picks and an international roster spot next year, “ It was kind of a gradual process and I think both sides walked away happy. No one was surprised.”

For McCaffrey, things had gotten too comfortable in the city she had grown up, attended college and started her professional career. The field she played on in high school, college, and until now professionally, were little more than a stone’s throw away from eAch other. Feeling that her career had stagnated, McCaffrey wanted to a chance at a fresh start.

“I just think nothing good comes from comfort zones especially at this level,” McCaffrey explained, “I kind of felt like I was at a point, to like kick my career into the gear that I want it to go to, I need to change and break out of that comfort zone. It really had nothing to do with our record per se (in Boston) as much as my lack of contribution there the first half of the season and what I’m capable of, (and) I think I’ll achieve somewhere. I think it will be better achieved somewhere where I’m not so comfortable and I’m pushed more.”

In 12 games with the Breakers this season, McCaffrey failed to record a single goal or assist after tallying 3 goals and 3 assists as a rookie last season. The move begs the question of whether player development is possible in Boston after several seasons with the club in perpetual rebuilding mode and seemingly constant coaching changes.

While McCaffrey emphasized that the trade was about the need for her to getting out of the city she had spent her whole life in, she did make a comment that alluded to the less than ideal environment in Boston.

“I love the team,” McCaffrey said about the Red Stars, “I love the philosophy. I love how upset we are that we just walked away with one point and I think that’s the biggest thing I took away from tonight is just that nothing but winning is acceptable here.”

Red Stars’ head coach Rory Dames feels that McCaffrey can help the team do just that. McCaffrey will add a different element to the Chicago attack. Dames explained that with Christen Press away with national team duty, the Red Stars lack an attacking personality who is proficient at running at defenders.

Dames must be confident in McCaffrey’s ability to bring this element, as the coach with the best record in the NWSL draft to this point gave up four picks in next year’s draft to secure the Boston College product.

“She’s different than any of the forwards that we have, regardless if she scores goals or not, she’s going to create chances and push lines further back and allow us to be able to maintain possession higher up the field,” Dames said about McCaffrey, adding, “and I think she’ll score goals.”

Only time will tell if trading for McCaffrey, who less than six months ago was training with the U.S. national team, proves beneficial for the forward and her new team. With the Red Stars averaging exactly a goal per game, if McCaffrey can regain her form, she could help bolster the attack and help Chicago claim a playoff spot for the second year in a row.