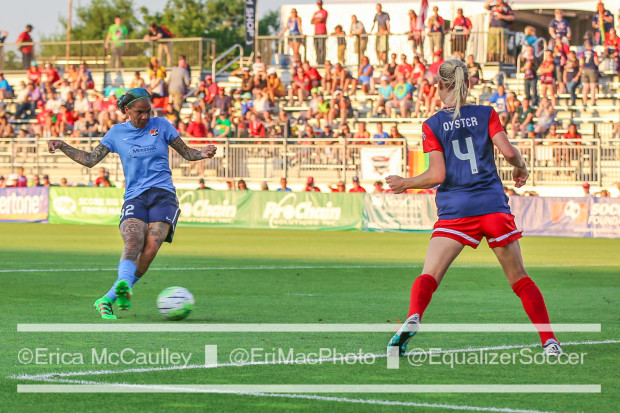 Last week saw two losing streaks snapped, Boston score multiple goals in a game for the first time this year, and the top-ranked team fell for the second week in a row. Portland and Boston both get much-needed time off as the NWSL heads into Week 14.

This will be the third of four matches this year between these two clubs in what is probably the closest to a true derby to emerge from this season’s regional rivalry system. The away team has won each of the two previous meetings, so recent history favors Washington, who sit comfortably in a playoff spot, trailing top-ranked Portland only by a tiebreakers and with two games in hand. In the midst of a surge, Sky Blue are in striking distance of Chicago and the much-coveted fourth playoff position.

Lauded in preseason for its depth, the Spirit bench has lived up to expectations, continuing to produce results even without five regular starters. Estefania Banini’s brace led the Spirit to victory over a struggling Kansas City last week, helped out by a Joanna Lohman goal. The two, along with Diana Matheson, lead the Spirit in goals scored. However, poor set piece defending allowed for most of last week’s goals, and the Spirit will want to be more creative from the midfield to put pressure on Sky Blue’s back line, who are second only to Boston in goals against.

The Jersey side will likely be without midfield engine Raquel Rodriguez, who is expected to face teammate Kelley O’Hara in their national team battle on Friday night. This means even more of the Sky Blue offense will pour through Leah Galton, who has been tearing past defenders since her first appearance. Ali Krieger had her hands full with Galton in their last meeting, and in her absence, Megan Oyster and either Caprice Dydasco or Whitney Church will need to work hard to prevent her arsenal of shots and crosses. However, if Galton draws enough attention, this could allow for someone like Sarah Killion or Maya Hayes to sneak inside, which is what will be needed to put one past a stingy Washington defense, who have allowed the least number of goals this season.

As stated above, Galton has been bossing Sky Blue’s left flank. Her incredible speed combined with a tenacious foot that nearly always manages to get the ball off has her playing a role in most, if not all, of Sky Blue’s attempts on goal. Whether she is winning the ball, drawing defenders, sending great service into the box,or launching a rocket at the net herself, Galton is Sky Blue’s most dangerous weapon, their key for winning and a clear target for Washington.

The veteran midfielder is having her best NWSL season yet. Always a key piece of the squad, Lohman has reached new levels in both her play and her leadership. A box to box midfielder, Lohman can be found all over the pitch, directing traffic, falling back on defense, and trying her hardest to hit the back of the net. With this season’s four goals, Lohman has already doubled her NWSL goal tally and will likely add more before October. Look for her to take control of the midfield and create chances.

Western New York has come a long way since they only put up one goal in the season opener. It could be a busy night for Nicole Barnhart, who is making a case for Goalkeeper of the Year despite (or perhaps because of) an often shaky Kansas City defense. By now, every defender has been taught to respect the prowess of Jess McDonald and Lynn Williams, leading the league in goals. Recent Flash signing Lianne Sanderson has brought a veteran presence to a young team, leading their midfield in the absence of SamMewis, and will be called on to take even more of a leadership role since captain Abby Erceg departed for Rio. However, FCKC has proven themselves capable of the upset, and the Flash would do well to be particularly wary of the scrappy Shea Groom, who finally seems to be shouldering her role as FCKC’s target striker. A key matchup to watch will be Jaelene Hinkle, still one of the league’s best outside backs despite being left off the Olympic roster, against either Brianne Reed who is likely to get another start with fellow rookie Alex Arlitt still out with an ankle injury.

The season opener, in which Houston put up what have been the most goals against Chicago this year, seems improbable now, given the direction each team went after that game. Chicago moved steadily up the table before slipping into a three-game losing streak, while Houston dropped six consecutive 0-1 losses. Both teams ended those streaks last week. The Red Stars took a first half lead against Orlando and held on throughout both a weather delay and an Orlando push, while Houston broke their scoreless streak in dramatic fashion with a 3-0 victory over top-ranked Portland. Both teams very much want the win, Chicago to hold on to fourth place and Houston to prove that last week wasn’t an anomaly. Kealia Ohai put on a tremendous performance last week but will not find it as easy to turn Casey Short, half of the best outside back pairing in the league. Look for Ohai and Denise O’Sullivan to be the creators in Houston’s offense. While Chicago hasn’t put up large numbers of goals, they can find ways to sneak one in, and as Taylor Comeau proved, not always from the most likely source. At defensive mid, Amber Brooks will want to lock down any of those late game shots from distance that have proven to be Houston’s undoing multiple times.

Last year no one would have thought that at two-thirds of the way through the season, the expansion team would sit above the shield winners in the standings, but that is exactly where they are. The Reign’s struggles are a mystery; retaining more of their roster than most and eventually adding two outstanding players from Japan should have produced similar results to last year, but that has not been the case. Players like Lauren Barnes and even Kim Little have not lived up to their former golden standards. Meanwhile, Orlando has come out stronger than the NWSL’s previous expansion team but has produced the uneven season that is to be expected from a brand-new roster. Defensive missteps led to Seattle’s loss last time, and despite missing Alex Morgan, the Pride are poised to jump on those same mistakes should the opportunity arise. Both teams are relying on young goalkeepers inexperienced in the NWSL (Haley Kopmeyer could return in goal for the Reign), as well as uncertain defenses, so expect this game to be battled in the midfield with both teams getting chances. Kaylyn Kyle in particular seems determined to find results for her team while missing the Olympics.