The Lowdown: Kealia Ohai walks the walk in Dash win 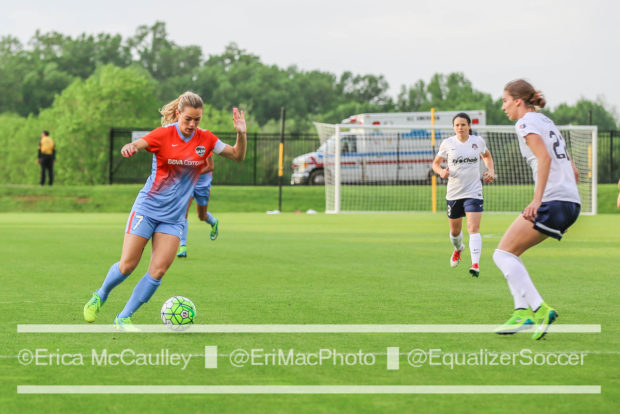 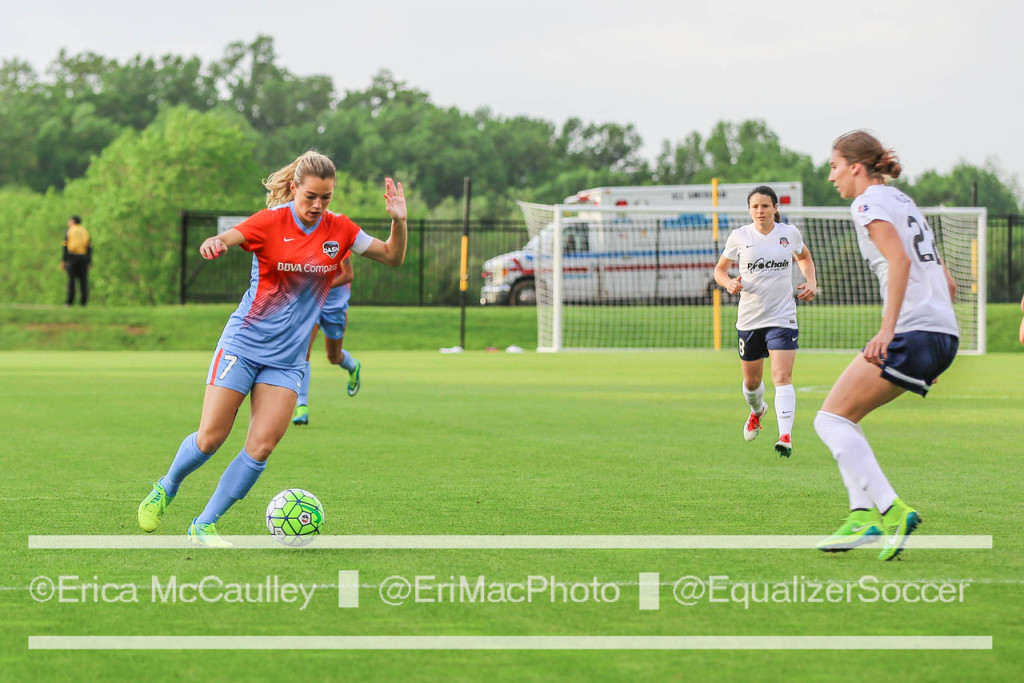 Kealia Ohai was vocal ahead of the Dash’s match against the Thorns and backed it up with an outstanding performance. (Photo Copyright Erica McCaulley for The Equalizer)

In the 7th minute of the Dash’s Saturday night match against the league-leading Thorns, Rachel Daly played a ball to the right flank for Kealia Ohai and sprinted to the far post. Ohai was already behind her defender, held onside by the Thorns’ deep-sitting center backs. But her cross was slightly behind Melissa Henderson whose attempt to get a foot on it whiffed. For a split-second, 567 minutes of goalless soccer played out over six games and more than two months flashed before the eyes of all Dash fans. And then the always-hustling Daly got the ball and with one touch, gave the underside of the crossbar a black-and-blue and ended the dubious league record for the most team minutes without a goal.

“I was so relieved when we scored and I looked over at the bench and I saw Randy (Waldrum) like literally jumping up and down,” Ohai said. “I knew he was really relieved. It took so much pressure off everyone.”

A week earlier the Dash lost their sixth straight match, 1-0 to Sky Blue. All six matches in fact, were by 1-0 scores. In the match before Sky Blue, Rachel Daly hit a 90th minute bicycle kick that caught Orlando Pride keeper Ashlyn Harris leaning the wrong way, but the agile keeper recovered to make a brilliant save, made another save on the rebound. The Pride then scored in the 92nd minute to win the match.

“To me that one hurt the most,” Ohai told The Equalizer. “We were right there. We had a couple of chances at the end of the game where it was literally right there at the end line. Someone just needed to touch it or walk it in and we didn’t do that. And they scored in the 94th minute. We were crushed after that.”

But after the Sky Blue match, in an in-house interview on the pitch at Yurcak Field, Ohai struck a different tone.

“At some point you kind of just have to decide, we’re not getting scored on today. Or the other end of it, I have to score today.”

Ohai walked the walk against the Thorns, staying aggressive all night. Her cross that wound up finding Daly set up the first goal and she scored the third with an explosive move into the box. Between her tough words in New Jersey and strong play against Portland with the captain’s band on her arm, the last few weeks have been something of a leadership breakthrough for the Dash’s first-ever draft pick.

“I think so,” Ohai said. “It’s been really difficult because we’ve been losing. When you lose, everyone is walking around trying to blame someone. Everyone’s in a bad mood. It’s been tough for me to keep it going, but as the captain with the national team players gone, it was just time to step up.

“You can talk about it all you want and you can talk to everyone and be positive, but at the end of the day when you’re on the field you have to step up and produce. That was my focus this weekend. I’m glad I was able to actually produce. A lot of games this year I felt that I played really well but it doesn’t really matter if you’re not producing.”

Ohai had another leadership moment at a recent training when she and Rebecca Moros addressed the team at practice. “Me and Becca kind of talked to the team and just said that everyone needs to look at themselves and think ‘what am I not doing that is causing us to not win?’ And if everyone can take more accountability than we can get better. But if no one takes any accountability, we’re never going to get any better.

“The forwards after that started to say, okay this is our thing.”

The results were not immediate, but Ohai believes there was an immediate uptick in effort. It was a theme Waldrum touched on during a scathing press conference following a home loss to the Pride.

“The first goal (on Saturday) I was looking for Mel and she missed it,” Ohai said as an example. “And then Rachel was there. That comes from being committed enough to being in the box.”

On Waldrum’s rant that said left the players “pretty pissed off” at their performance, Ohai said: “He was right.”

A few weeks earlier during a scoreless draw with Sky Blue, Ohai became a talking point when she bypassed the proverbial coach’s handshake after being subbed off earlier than she thought necessary.

“I never should have done that,” Ohai acknowledged. “But I think it was blown way out of proportion. I am an extremely competitive person and I want to play. We just disagreed. I thought that I was playing better and shouldn’t come off the field. We talked after and I just said, ‘I’m sorry I should have shook your hand. I’m just so competitive that it makes me a little crazy.’

“He agreed and said that’s fine. I definitely shouldn’t have handled it that way, but I can’t apologize for being competitive. That’s what makes me who I am.”

[CANADA: D’Angelo’s  wrist healing; could be ready for Rio]

With the goal streak over and the losing streak over, the focus shifts to Chicago where the Red Stars will be looking for some revenge for the 3-1 thumping the Dash put on them on opening night. Ohai knows the job will get more difficult against a Red Stars team currently sitting fourth and boasting a fantastic defensive spine led by outside backs Arin Gilliland and Casey Short and defensive midfielder Danielle Colaprico.

“I think to even have a chance we have to win seven out of nine (remaining games),” she said, not running from what is some ugly playoff math for the Dash. “Honestly, as long as we’re still in it, everyone still believes. Crazier things have happened. I know the forwards and the midfielders are focusing on scoring at least one goal every game to give us a chance. That’s our focus going into Chicago.

“I think the Portland game was a perfect time to get everything back in order and get back to scoring. It’s going to be a lot more challenging this weekend. I know that the team understands that and we’re going to be ready.”

Here are the attendance numbers for NWSL Week 13 plus season totals with comparisons to the same number of home dates in 2015. Note that the Breakers tweeted an updated attendance from what was announced at the match.

-Before Rachel Daly broke the Dash’s scoring voodoo the Houston club posted 567 consecutive minutes without a goal, establishing a new league record. The six straight matches in which they were shutout ties a league record set earlier this season by the Breakers, but the Dash are the first team to do that all within the same season.

— The Breakers are off this weekend but there is a scenario that could see them mathematically eliminated from reaching the playoffs by the time it is over. If the Red Stars and Sky Blue both win and the Flash get at least a draw the Breakers will be officially out of their misery.

— Speaking of the Breakers they acquired Natasha Dowie this week who used to play for head coach Matt Beard at Liverpool. To acquire the necessary international roster spot the Breakers traded their lowest 2nd round pick in 2017 to the Flash. The Breakers are now waiting on Dowie and French midfielder Ghoutia Karchouni. The international spots for both are for the rest of 2016. 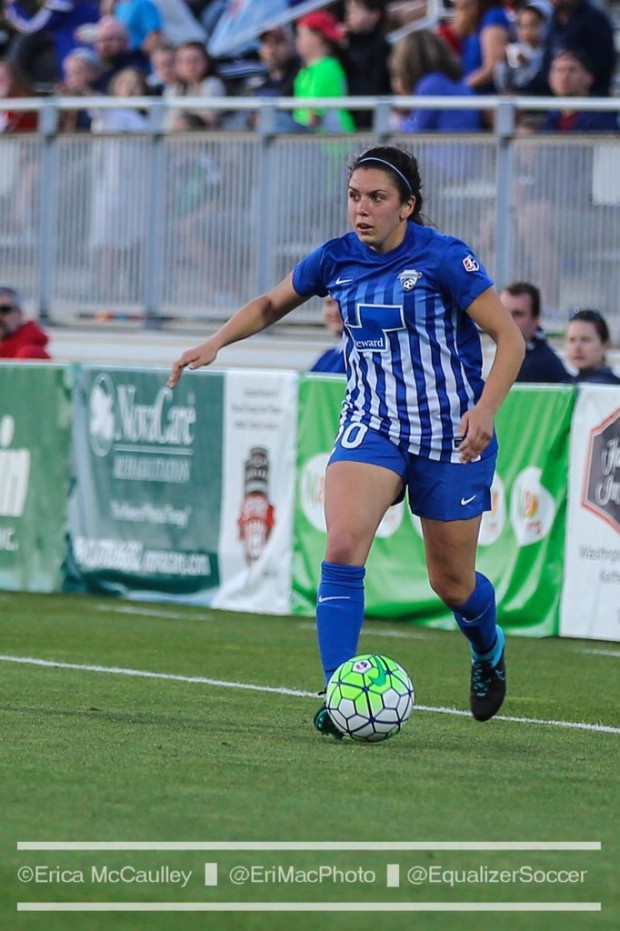 — The Breakers also lost a player. Mollie Pathman, who has appeared in every Breakers game since August 2014, retired after Sunday’s match to pursue a career in the medical field. A week earlier Pathman scored her first—and only—NWSL goal in Orlando.

— Off the field the Breakers keep steaming along. On Tuesday they announced an agreement with Bud Light for the remaining three home matches, and later said their July 31 match against the Pride is sold out.

— From Ohai, not included above: “The biggest thing was we hadn’t scored. You can only go so long before you go crazy. It was tense. It was tense with everyone. But I think we responded in the right way. But it was to the point where you feel like you can’t fight anymore because you’re fighting and fighting and nothing is going your way.”

— Ohai on Dash attackers pressing in the attacking third as the streak grew: “Because we hadn’t scored in so long, when we got around the goal we were so stressed about it and it’s so in the back of our minds so we’d hurry and were rushing in front of goal. We need to realize that it’ll come. If we just keep it and keep circulating it around they goal, they’ll come.”

-My Week 13 Player of the Week ballot: 1) Kealia Ohai – Took control early and often using her best assets to control the right flank and help extricate the Dash from the worst scoring slump in the history of NWSL; 2) Denise O’Sullivan – Rare for me to put teammates one-two, but O’Sullivan put in a marvelous two-way performance, winning ball after ball in midfield and making productive plays with it more often than not; 3) Leah Galton – Changed the course of the entire game with one quick move to beat Christen Westphal to win a penalty that served as the equalizer in an eventual Sky Blue win. Added the go-ahead goal and was a handful for anyone the Breakers ran at her.

— Look for the attendance comparisons to keep tightening as we reach the stage where the World Cup bounce began to inflate averages.

— That Arin Gilliland header clearance off the line into the hands of goalkeeper Michele Dalton was pretty cool—and very unlikely to be duplicated anytime soon.

— Two referee calls I can’t come to terms with from Week 13. One was calling the foul on the Red Stars rather than playing advantage when it looked like Jasmyne Spencer had a chance to get behind the defense. The other was not booking Eunice Beckmann for her foul on Catherine Zimmerman in the second half. Beckmann tripped her from behind—a yellow card every time in my opinion—but the kicker is that she was given an early talking to for a borderline bookable play early in the match.

— The Breakers are looking to “tap into the 21 to 30-year-old age group.” Here’s hoping all of the other clubs follow suit.

@TheDanLauletta Definitely! If the team is willing to advertise to my age group, I am willing check them out and give them a chance.