D’Angelo’s wrist healing; could be ready for Rio 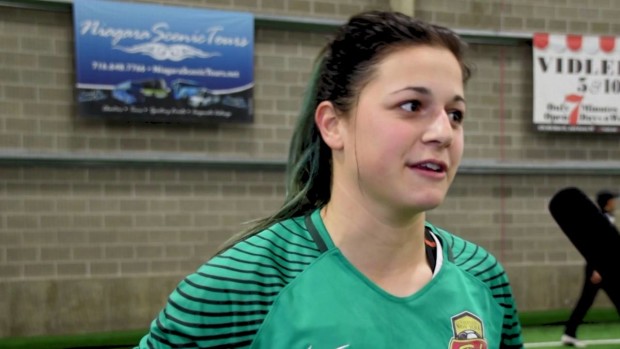 VANCOUVER, B.C – As Canada prepares for the 2016 Rio Olympics there is a little bit of uncertainty in the goalkeeper department. Stephanie Labbe is likely to be in net when Canada kicks off against Australia on August 3 in Sao Paolo. The health of goalkeeper Sabrina D’Angelo’s is a bit of an unknown.

The Western New York Flash keeper broke her wrist in warm-ups prior to a match on May 21. As a typical Canadian would, D’Angelo had her wrist taped up so she could play the match and deal with the aftermath following the contest. D’Angelo is working step by step to get back to full strength before Rio.

“I’m obviously not able to train with the team right now, but I get to do things on the side,” D’Angelo said. “I’ve progressed to a small bouncy ball and then to a soccer ball with my splint on, just catching those and doing some soccer specific movements to be able to progress and transfer to eventually playing soon.”

D’Angelo has been able to work on range of motion without her splint on, and she’s doing her best to stay focused, and keep a positive mind. As D’Angelo and Canada Soccer await X-ray results, coach John Herdman notes that D’Angelo couldn’t be more of a team player and bright spot during a difficult time.

“Yeah, fingers crossed the x-ray will come back clean,” said Herdman. “She’s just an amazing character, a great spirit around the group. She doesn’t mope around, she just gets on with things, and adds where she can. The type of positive mind she is, I’m sure everything will come back great and she’ll be on track.”

Canada will play China in a closed-door friendly on July 20 and a July 23 match against France in Auxerre. Both matches will provide a strong test and an opportunity to work out tactics, formations, and strategies before Rio. Herdman had targeted these matches as a possible return-to-play date for D’Angelo. Whether D’Angelo will play in either match will be a carefully made decision.

“That’s obviously a goal of mine,” admitted D’Angelo, “but it’s very dependent on the X-ray and just what the doctors say, the risks involved. I think that’s a decision we all have to make and I have to make. I can’t say yes, or no yet.”

D’Angelo is confident in her abilities if she does not see any playing time this week. Her strong form with Western New York Flash prior to her injury helps her feel assured that she can step into the net if Herdman calls her number.

Getting named to the Canada Soccer Rio Olympic roster was a dream come true. Playing against the likes of Australia, South Africa, or Germany would be unbelievable for the first time Olympian.

“Oh my gosh, so excited,” D’Angelo recalls her enthusiasm heading into Rio. “Obviously it’s a dream of mine, it’s something I’ve been working on for how long… Words can’t describe it, when I got that email saying I was on the roster, I screamed, I was so excited. I got emotional, so definitely a dream.”