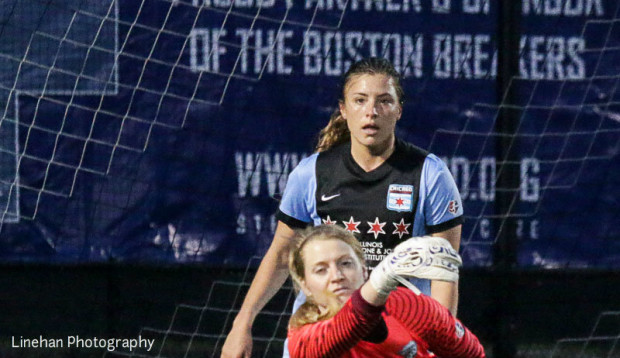 The Chicago Red Stars turned around a three-game losing streak on Saturday topping the Orlando Pride 1-0. The win marks more than just a road trip victory for Chicago, as both teams went into the contest in fourth place with 18 points apiece. The table is particularly tight around this final playoff spot and every point and goal will matter moving into the latter half of the NWSL season (particularly so with the Reign moving to 17 points and Sky Blue FC on 16 points ahead of Sunday’s match in Boston).

A known challenge for teams like Portland and Orlando during the Olympic break is the sizeable deficit in national team players. Orlando was missing six of its squad, while Chicago was only without three.

These lineups are going to be a good time. #ORLvCHI goes live in 15 minutes 🙂 https://t.co/DtdYowiL5T pic.twitter.com/d8tftvfnAp

The absence of those called up for Olympic training allowed for some variety in the lineups, including a start for Taylor Comeau for Chicago who headed in the game’s loan goal (23’) off a well-placed ball from Sofia Huerta. Vanessa DiBernardo and Cara Walls also deserve mention in the game winning play. DiBernardo crossed fields with a long diagonal ball to Walls who left the ball off for Huerta’s service. DiBernardo came close with another shot at 38’, which glanced off the right goal post.

Orlando’s inability to convert set pieces and a weather delay at 74’ challenged the home team in finding an answer. Jamia Fields and Jasmyne Spencer showed off speed and potential on the attack but could not convert chances. The Red Stars physical defensive line was also a factor in keeping the home side off the board. Another factor could have been the official’s decision to grant a free kick to Orlando instead of playing advantage in the 88th minute. Captain Kaylyn Kyle was yellow carded upon pleading the case for advantage.

Overall, both sides showed strengths despite missing key players. Huerta continued to step up and show how threatening she can be on the ball from distance (and on either foot). Leah Fortune and Christina Burkenroad subbed for Orlando during the second 45’ and showed composure and value add. In 88’ Burkenroad appeared to have tied the score, but was called offside.

The teams will not meet again in the regular season and will head into Week 14 with Chicago at home against Houston Dash (7/23, 8pm EST) and Orlando Pride away against Seattle Reign (7/23 10pm).