Set pieces rule the day in Spirit win over FCKC 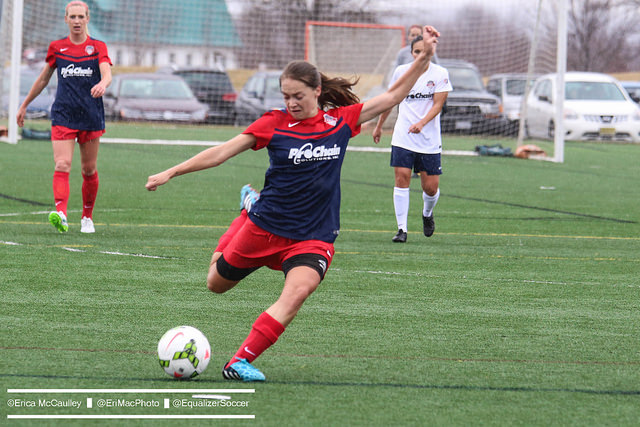 The Washington Spirit scored three goals off of set pieces including two from Estafania Banini and they defeated FC Kansas City, 3-2 on Saturday night in front of the smallest crowd of the season at Swope Soccer Village. The win keeps the Spirit with the fewest points dropped in NWSL this season and delivered a dagger to the fading playoff hopes of two-time champion FCKC.

The first half was spent mostly in midfield and it appeared that the Blues were slowly beginning to forge and edge in the midfield. In first half stoppage time, rookies Katie Bowen and Cheyna Williams came together near midfield and Bowen was whistled for the foul. Christine Nairn floated a monster free kick into the box where Silva was the first to get her head to it. But Banini was second and, given too much space in the corner of the 18, took a touch to elude one defender and then beat Nicole Barnhart for her third goal of the season.

The Blues came out with an immediate chance after halftime. Erika Tymrak whipped one to the top of the six where Silva put a head on it but Spirit goalkeeper Kelsey Wys was well positioned to make the point-blank save. The Spirit had a chance to double up when a long free kick slipped through Barnhart’s hands but Tori Huster was unable to get good contact on the loose ball behind the keeeper.

The Spirit finally gave themselves a cushion in the 58th minute. Nairn’s corner kick was sent away from goal but with too many FC Kansas City players packed deep, Whitney Church got the next touch on it to Megan Oyster who directed it forward toward a gaggle of players in front of Barnhart. Several touches back and forth by both teams later and Joanna Lohman for a clean touch and stuck it in the back of the net. It was the fourth goal of the season for the veteran Lohman.

FC Kansas City clawed back into it. A 69th minute corner kick by Erika Tymrak was delivered to the far post where a leaping Tori Huster was unable to clear it and Silva, waiting in behind her, went up for the header and connected on her first goal of the season.

The search for an equalizer was undone by more inability to clear defensive set pieces. The Spirit won a corner kick in the 82nd minute–the third straight corner kick in the sequence–was cleared by Averbuch but landed at Banini’s feet at the top of the box. Banini waited for the ball to bounce and then hit it one-time and scored on a wonderful finish for her fourth of the season and second of the night.

Shea Groom made stoppage time interesting by scoring just after the clock struck 90. After chesting down a header by Caroline Kastor, Groom split the Spirit central defenders with an explosive move and scored her fifth of the season–and third in the last two weeks–but it was not enough to get FC Kansas City back in the match.