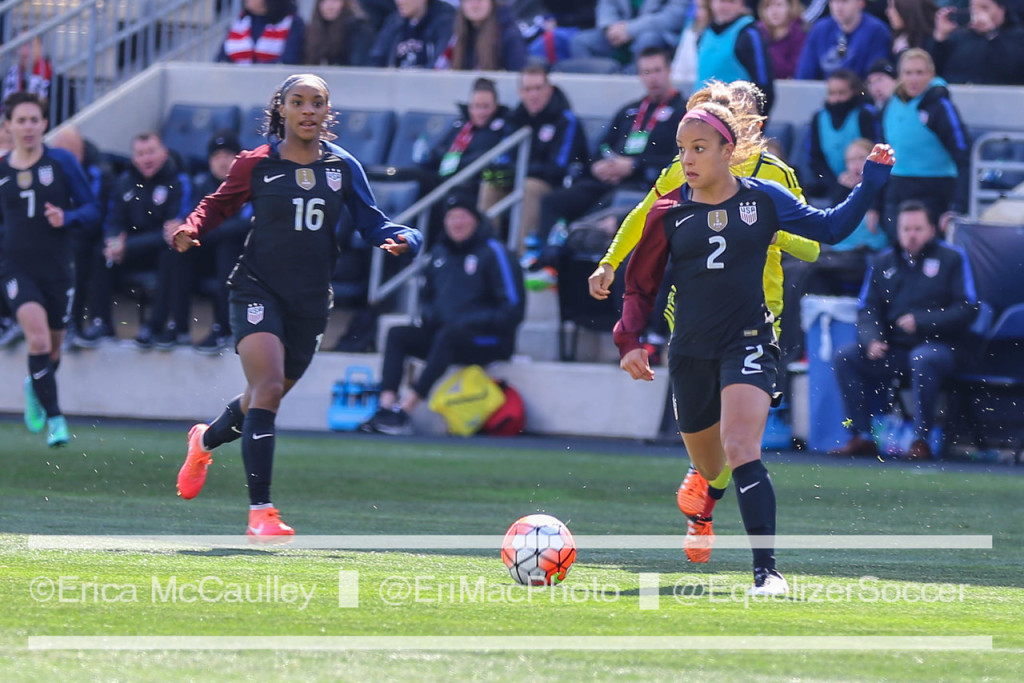 Mallory Pugh (2) will not play for UCLA this fall due to commitments to the U.S. senior and U-20 teams. (Photo Copyright Erica McCaulley for The Equalizer)

As it turns out, Mallory Pugh won’t be playing for UCLA in 2016.

Pugh’s parents, Karen and Horace, told the Denver Post that the 18-year-old United States national team star deferred her enrollment at UCLA until the start of 2017, due to national team commitments. Pugh this week was named to the United States’ 18-player roster for the Rio 2016 Olympics next month, and she is also expected to take part in the U-20 Women’s World Cup, which will be in Papua New Guinea from Nov. 13 to Dec. 3.

The Olympics start August 3 and the gold-medal match is on August 19. The Americans hope to be in that in search of a fourth straight Olympic gold medal. That bleeds into the start of training camp for the NCAA season, and there will be a heavy schedule to follow for the U.S. women — another long victory tour if they win again, like they did at last year’s World Cup, and a shorter tour if they don’t win the gold medal.

The timing of the U-20 Women’s World Cup is a significant issue for NCAA teams. The College Cup national semifinals and final take place on Dec. 2 and 4, respectively, which overlaps the final of the U-20 World Cup.

This has controversially caused for U.S. Soccer and U-20 head coach Michelle French to request that players redshirt for their respective college seasons. Some schools, including Penn State, will be hit hard by that. But other players have opted to pass up the U-20 World Cup to stay with their college teams. TopDrawerSoccer reported that Texas A&M star Mikaela Harvey will stay in school this fall.

“My fear right now with the design of this venture into the U-20 World Championship is we’re almost sacrificing player development for winning,” North Carolina head coach Anson Dorrance told TopDrawerSoccer. “They want to have full access to the players all fall, which I do not think is to the benefit of their development.”

Pugh skipping 2016 at UCLA also ostensibly brings back into question her future. In January, on NWSL draft day, Portland Thorns FC traded up to the No. 1 spot in the new player allocation system, anticipating the club would use the selection on Pugh, who was 17 at the time and finishing her senior year of high school. Reports were that if Pugh were to turn professional, she and her family wanted her to do so in Portland. She would have been the first player to skip college for the NWSL. Lindsey Horan, also a Colorado native, in 2012 passed up a scholarship to North Carolina to sign with PSG and turn professional at age 18 in the only comparable scenario for American women.

But nothing happened regarding Pugh on draft day, and it was soon revealed by Pugh’s parents that the teenager, after long deliberation, decided she would attend UCLA. A few days later, she scored in her U.S. senior debut.

Even then, some six months ago, Pugh was just the new kid looking for a shot with the U.S. senior team. But since then she has played in 13 of the 14 matches for the U.S. this year and has pushed for a starting spot. Her deferring enrollment at UCLA until 2017 gives her more time to think about that decision to not turn professional. There isn’t any indication that she is thinking about changing her mind, but her explosion onto the scene – potentially with more to come in Brazil next month – could open the door to such thoughts. The Thorns hold the top pick in the allocation ranking until the order resets following the NWSL Championship on Oct. 9.