Week 13 Preview: Which Spirit side will show up? 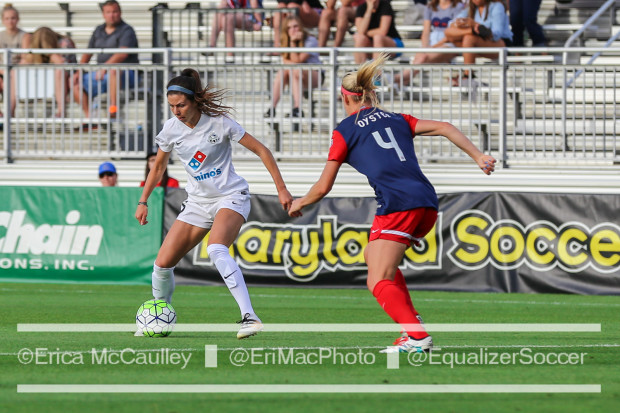 After what was easily the craziest and most dramatic week yet of the season, the NWSL will get back into the swing of things in Week 13. Some teams are trying to shore up their position before the August lull, others look to break into the top four, and a few simply want to score.

At first glance, this game appears more uneven than perhaps it actually is. Washington sits comfortably in third place, while Kansas City is only in seventh. But their previous match this season was a hard-fought battle by both sides, lasting 79 minutes before a goal was scored, and the setting is right for an excellent evening of soccer.

Washington has looked like two separate teams at times, alternating between fluid, confident play and a group of 11 players who are on different pages. Although missing five starters, they were touted as having one of the deeper benches in the league, and so far they’ve proven it. Kelsey Wys has calmly stepped into Stephanie Labbe’s shoes, allowing only one goal in her three appearances this season, and the corps of numerous forwards doesn’t appear to be suffering too terribly from Crystal Dunn’s absence. The key will be to continue that momentum, with Joanna Lohman, in the midst of one of her best seasons yet, shouldering the creative burden without Dunn or Diana Matheson.

FC Kansas City was rocked by offseason losses, and it doesn’t look like they’ll be defending their back-to-back titles. However, they have made improvements, and coming off a huge win against Portland, playing at home, they are in a great position to beat Washington. Shea Groom was finally given help up top and looks to be establishing a solid partnership with Tiffany McCarty, and both Mandy Laddish and Erika Tymrak are coming into form. FCKC has demonstrated an ability to weather storms, holding Portland, Chicago, Seattle, and Sky Blue to draws so far this season. That tenacity, combined with an offense that may be finding its footing, could be the key to beating Washington.

The obvious contributions of Groom and McCarty notwithstanding, Barnhart is probably equally responsible for FCKC’s win over Portland last week. She has been in excellent form this season, reminding everyone of why she was Hope Solo’s backup for so long, and has come up big for her team in nearly every game. With a weakened defense due to injuries and national team duties, Barnhart will need to be on top of her game to deny Banini, Ordega, and Stengel.

Much was made about Huster’s first goal since 2014 when she scored against Kansas City two weeks ago, but she has quietly been a driving force in Washington’s midfield the entire season. The contributions of defensive midfielders are often overlooked, and Huster is no exception. Whether dropping back to help the center backs fend off a counter, restarting play, or pushing up to create chances, Huster is a solid piece of the Spirit midfield who will be tasked to prevent Tymrak, Laddish, and LaBonta from creating opportunities for Groom or finding them themselves.

This is a match-up of two teams that came out fairly strong and have begun to slip in recent weeks. Chicago is one place ahead of Orlando purely on the basis of winning their last meeting, so a win by either team would take a big step toward holding the final playoff spot. Once the stingiest defense of the season, the Red Stars have allowed two goals in each of their three previous games on this four-game road trip. And without the option of a Christen Press magic goal to carry a sputtering offense, the next few weeks could be rough. Orlando has been hot and cold, winning all but one of their home games as well as losing all but one of their away games. Dramatic stoppage time goals have been responsible for their last two victories, but both of those were against the two bottom teams in the league. Chicago’s Colaprico and DiBernardo midfield should dominate Orlando’s, but if Sofia Huerta and Jen Hoy can’t find the back of the net, Jasmyne Spencer could sneak in a win for the Pride.

With both teams missing half of their regular starters, anyone who hasn’t paid attention this season could be forgiven for thinking this would be an equal match. After all, Houston defeated Portland in preseason. However, the teams have headed in opposite directions since then, with Portland sitting on top of the table and Houston barely saved from the bottom. Portland is coming off their first loss of the season and will be looking to reclaim their dominance, while Houston is chasing a goal (literally) that has been eluding them since the beginning of May. Houston goalkeeper Bianca Henninger, holding down the fort between the posts while Lydia Williams is on Rio duty with Australia, will have a busy night ahead of her as she faces Dagny Brynjarsdottir, who has a lethal shot from distance, and Nadia Nadim, who appears to have found her form upon the departure of her national team teammates.

Last week’s game between the two will likely go down as one of the most infamous in the league’s short history. With plenty of drama on, off, and about the field, it’s unfortunate these teams were scheduled to meet again immediately in what now promises to be a highly charged match. Although Seattle got off to a slow start, they appear to finally be moving in the right direction, helped greatly by two of Laura Harvey’s trademark game-changing signings in Nahomi Kawasumi and Rumi Utsugi, who have combined for four goals in 195 minutes. Unfortunately, it looks like Haley Kopmeyer will be out after suffering a high ankle sprain in last week’s match, leaving rookie Andi Tostanoski in goal. The Williams-McDonald-Doniak offensive firepower of the Flash could capitalize on her inexperience, but they’ll need to do better on the opposite end of the pitch in order to secure victory. Flash coach Paul Riley is suspended for the match. Last time that happened the Flash beat up on Sky Blue, 5-2.

It’s almost surprising to think Sky Blue only put up one goal against Boston in May, but their offense has come a long way since then. Out of all the teams in the middle of the pack, Sky Blue looks best poised to make a run for a playoff spot. Although the team lost a big part of their engine in Kelley O’Hara, the Christie Rampone-led defense is holding fast, and latecomer Leah Galton has been giving the league’s best outside backs a fit with her speed and service. Add in Raquel Rodriguez with a strong supporting cast, and the struggling Breakers likely will notend their losing streak in this game. Keep an eye on Julie King, who not only has stepped up to provide much-needed leadership in Whitney Engen’s absence but is also on her way to being the first player this season to reach yellow card accumulation (thanks in part to the Rio departure of Lindsey Horan who like King is one short of a suspension). At this point it’s unclear what will end Boston’s woes. Mollie Pathman will not be part of the solution though. She announced Friday that she is retiring after this match to pursue a career in the medical profession.