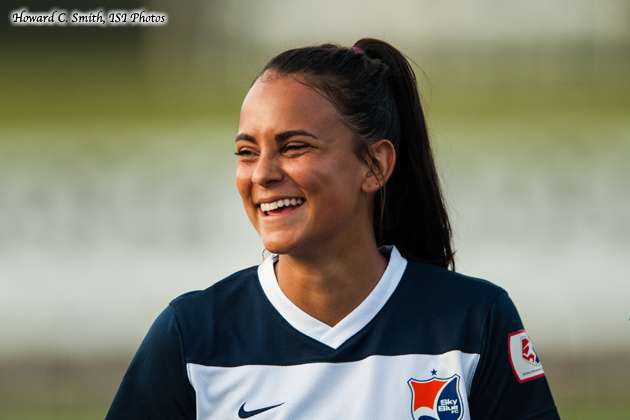 Taylor Lytle’s 54th minute blast carried the evening for Sky Blue FC in a 1-0 victory over the Houston Dash, the sixth straight loss by that score for Randy Waldrum’s side.

No one closed down Raquel Rodriguez after she collected an errant Dash clearance and she was easily able to pick out Lytle about 25 yards from goal. Lytle took a touch into space between defenders and beat Bianca Henninger with a perfectly placed shot from 20 yards out. Lytle nearly had another one to match from a similar distance but Henning came up with a sprawling save.

The Dash created chances early but were not able to offer too much trouble to Caroline Casey in the opening quarter hour. Their best chance came late in the first half when Amber Brooks shot from long distance smacked off the post. They had a late chance on a set piece but Chioma Ubogagu lofted her shot over everyone and everything for a Sky Blue goal kick.

The Dash joined the Boston Breakers as the only NWSL teams ever to be shutout six straight matches and the first to do it all in the same season. Their shutout streak in minutes reached 570, one off the Breakers record. The Dash will automatically tie that mark at the opening whistle of their next match.

That next Dash (2-7-1, 7 pts) match is next Saturday at home to Portland. Sky Blue (4-4-4, 16 pts), now two points from the playoff line, are in Boston next Sunday where they will be seeking their first winning streak since the end of 2014.