One month from Rio, Rapinoe back to full training 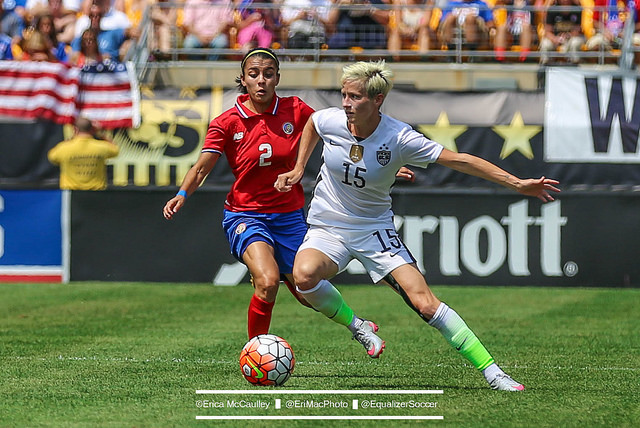 Megan Rapinoe is back to full training with the USWNT. Will she make the 18-player Olympic roster? (Photo Copyright Erica McCaulley for The Equalizer)

Megan Rapinoe has returned to full training with the United States women’s national team, less than one month ahead of the start of the soccer tournament at the Rio 2016 Olympics.

Rapinoe is back in full contact with the U.S. women, who began training in Chicago this week ahead of a match Saturday against South Africa at Soldier Field. Rapinoe will not play in Saturday’s match, according to U.S. Soccer. She was brought into camp for evaluation.

She continued: “I’m back in with the team now and it feels good, but it’s still a tight timeline and I think first and foremost, I want to be healthy and be confident in my body and in my play. And if I have an opportunity to make the Olympic team, I’ll be thrilled. But I can’t rush it; there’s just too much at stake.”

U.S. coach Jill Ellis has been monitoring Rapinoe from afar up until this week, although Rapinoe has been in previous camps with the U.S. on a non-playing basis.

“I’ve known what she’s been doing,” Ellis told FourFourTwo. “Certainly getting minutes right now [is key], but I think the most important thing for me is she’s able to train unrestricted and we got to that point. And that’s important, that she can take contact and doesn’t have any restrictions. We got to that point a couple days ago and that was good to see.”

[GOING FOR GOLD: Which players will make the USWNT’s Olympic roster?]

Ellis is expected to name her 18-player Olympic roster next week. Ellis has stated on several occasions that Rapinoe is the type of game-changing player who is worth bringing to the Olympics even if she hasn’t played significant minutes in preparation for the tournament.

“I always talk about seeing players in the pressure cooker, but for some players you know what you’re going to get,” Ellis told The Equalizer in February. “And some it’s a little bit of exploring what you could potentially have. With Rapinoe, with the talented player that she is, I think if there is a player that can return – because she’s been through it (a torn ACL) twice before, unfortunately – I have not in any way, shape or form factored her out (for the Olympics).”

Saturday is the United States’ penultimate official friendly match before the Olympics. The U.S. will play Costa Rica on July 23 in Kansas City before departing for Brazil.

Seattle Reign FC coach Laura Harvey said recently that she expects Rapinoe to go to the Olympics, but not to play in the NWSL ahead of time.

A recent blog post from Rapinoe, however, suggests that she could play with the Reign soon. Seattle plays at home against the Western New York Flash on July 16.

“My first practices are here, my first game with the Reign will be here very shortly, and soon after that first game back with the Gals, then the biggest sporting event in the world, the Olympics,” she wrote.

The Lowdown: Which teams are best suited for summer?
USWNT re-ups fight for equal pay with public displays