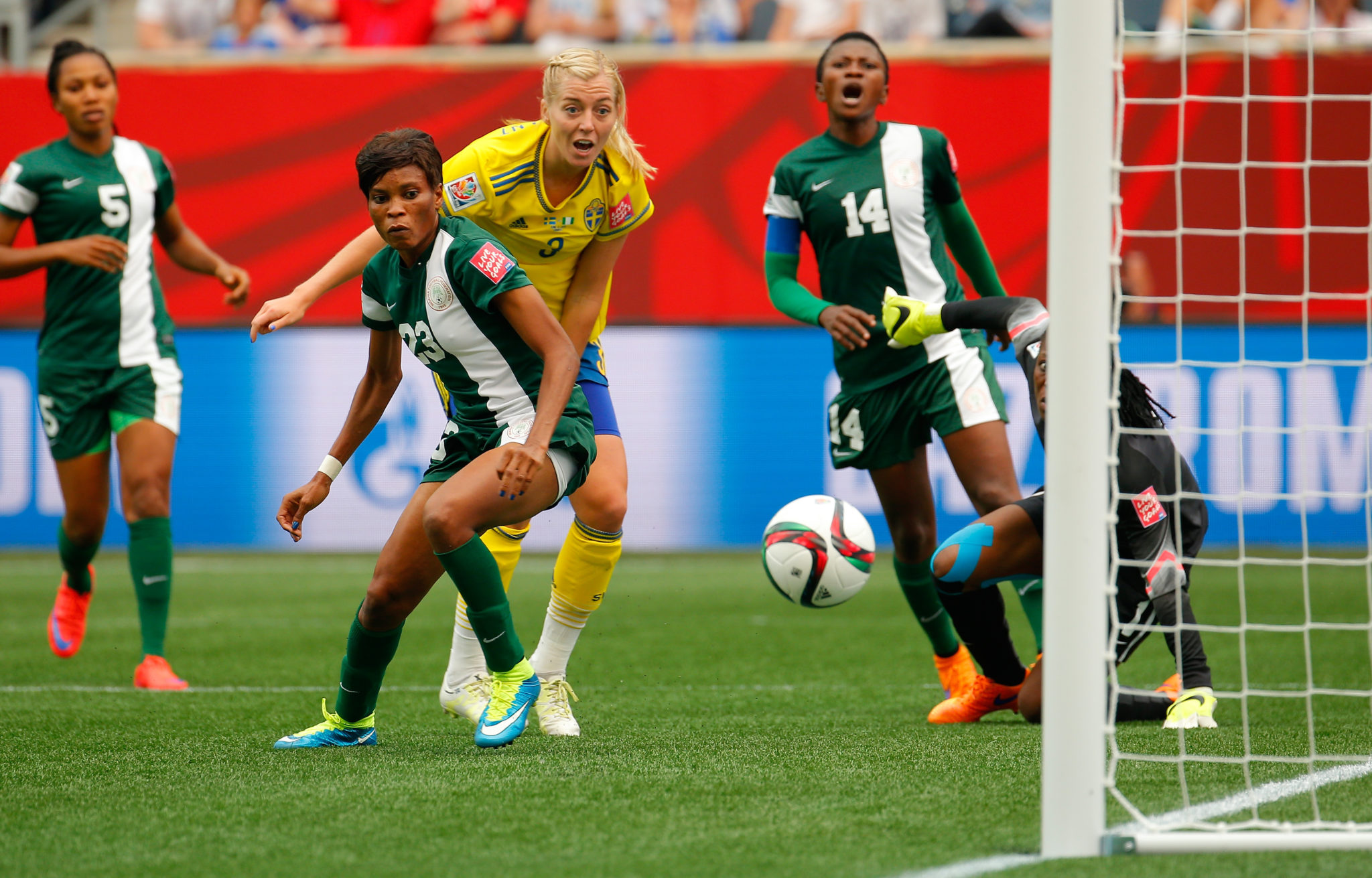 “Remember, today is the tomorrow you worried about yesterday,” Dale Carnegie rightly said. What is left for us, then, is to assess what has changed (or not) between that today that has now become our yesterday and the tomorrow that we now live in as today.

Here is a notable quote by Dale Carnegie; “Remember, today is the tomorrow you worried about yesterday.” It’s now left for us to assess what has changed (or not) within that space of time.

See how quickly a year has gone by since the 2015 FIFA Women’s World Cup lit up Canada with its glamour and grandeur. It was the seventh edition of the quadrennial showpiece and for the first time had 24 teams competing – with the most successful team on the African continent, Nigeria, parading itself as one of the elite few maintaining their ever-present status.

But, for the African Champions, preparations were not top-notch and so expectations were not so high. However somewhere in many Nigerian hearts was a hidden the yearning for a “perfect” outing, that was further ignited when the Edwin Okon-led side delivered an inspiring performance in their opening match as they came from behind twice to draw Sweden in a six-goal 3-3 thriller.

The rest is history (maybe mystery or even misery). Unfortunately, the Super Falcons of Nigeria could not even get past the group stage, with the United States officially putting a halt to the lofty dream of a world cup title after Australia did the real damage. Truthfully, the Super Falcons had not done enough to earn it, even now.

[MORE: One year after World Cup, has anything changed for Cameroon?]

In any case, wasn’t it ironic that so little was invested in the African Champions’ preparations for the World Cup yet cash rewards were promised by the President of the Nigeria Football Federation, Amaju Melvin Pinnick so they can conquer the world? At the time, many advised that the so-called reward be used to support the development of women’s football in the country instead, but nothing more has been said or heard about that. From then on, the financial situation of the country and the NFF in particular has rather grown worse.

The glass house is broke (even broken as the case may be).

After the failure in Canada, the Super Falcons moved on. And staring them in the face was an opportunity to make things right almost immediately; the 2016 Olympics. Not like it was going to be a jolly smooth ride in qualifying but they needed a ticket to Rio. Okon was sacked and replaced by his assistant Christopher Danjuma on an interim basis. The real question was why?

Coach Okon had only failed on the world stage, which does not dispute the fact that his record against African teams is near impeccable. Why did the NFF let go of their 2014 African Women’s Championship-winning coach, without a substantive replacement? Even coach Danjuma would admit he was only passing time.

Maybe at the time, it seemed like the right thing to do. But Equatorial Guinea compounded Nigeria’s woes making sure that the African Champions did not qualify for the Olympics for a second time in a row, barely one month after the World Cup. Then, following back to back defeats to Ivory Coast and Cameroon, the Danjuma-led side could only manage fourth place at the All Africa Games with the excuse of key players such as Asisat Oshoala being unavailable. For a team largely dependent on the country’s women’s league, has it now come to a point that quality can no longer be found in the league?

In spite of the many walkovers witnessed in the Nigeria Women Premier League last season (with seven-time Champions, Pelican Stars surprisingly having the most), Rivers Angels, the dominant team in recent times, emerged Champions at the Super Six tournament which followed the regular season of Groups A and B. No sponsors for the league still, so no prize money except for the cash prizes from the host state of the Super Six, Abia State. To put it in perspective, just around $580.

Meanwhile, Danjuma was kept at bay by the NFF. His job was obviously done; he didn’t even need to be told. However, the moment any talk of a new coach for the Super Falcons was raised, it will be met with the response of funds being unavailable. Until the qualifying series for this year’s Africa Women Cup of Nation, anything concerning women’s football ended with promises. Then in February 2016, another interim coach Florence Omagbemi was appointed – pending the arrival of an expatriate coach – alongside four-time Africa Women Player of the Year Perpetua Nkwocha, former Super Falcons goalkeeper Ann Chiejine while Bala Mohammed retained his post as goalkeeper trainer.

Could this be the breath of fresh air?

The new technical crew qualified the Super Falcons for the 10th Africa Women’s Cup of Nations billed to take place in Cameroon later this year after a 3-1 aggregate victory over Senegal. Returnee Falcon, Rita Chikwelu scored one of the goals.

Back to the NWPL which is without a Chairman after Mrs. Dilichukwu Onyedinma’s tenure ended last year, commencement date moved from February to March then April, before finally kicking off in May.  An ad-hoc committee appointed by the NFF is currently in charge of the women’s league board. Prior to the start of this season, questionable decisions were reached at the Annual General Congress, including the reinstatement of last season’s relegated teams and the decision that there would be no relegation this season. In any case, we hope improvement in the area of funding, organization and structure.

The NWPL is four match days old, and there’s one walkover to report plus a bit of funding issue rearing its ugly head. Again, in spite of insisting on the appointment of a board chairman before the season starts, there’s none yet. The truth is, the level of attention given to women’s football in the country is as low as it was before the World Cup – probably even worse, partly due to the inherent disaffection for women’s football and the Federation faced with its constant squabbles as the Senior Men’s national team (who is the proverbial favorite child) faces crises of another dimension.

Sometime in April after an executive meeting of the Nigeria Football Federation, “The Committee congratulated the Super Falcons for the team’s qualification for the Africa Women Cup of Nations, Cameroon 2016,” but observed that there is need for an overhaul of the team, particularly in certain playing positions. It therefore charged the technical crew headed by Florence Omagbemi to work assiduously towards re-engineering the squad before the finals in Cameroon.” There has been no mention of the Super Falcons since then. And then one month to AWCON they would be called to camp.

All the Amaju Pinnick-led NFF are currently concerned about is the Super Eagles and their preparation for the 2018 FIFA World Cup qualifiers starting in November, considering they failed to qualify for the 2017 Africa Cup of Nations. They have already played two international friendlies regardless of the oppositions (Mali and Luxembourg).

For the Super Falcons, it’s looking like the same old-same old, even when it’s obvious that they are gradually losing their dominance on the continent.

It’s June again, but this time we don’t have to stay up late to watch our Falcons play. We still await a new league sponsor whom the NFF President promised was near-conclusion many times in the last year. It doesn’t seem like there are any plans yet on their preparation for AWCON. In August, our hearts would be preoccupied by the Olympics. Soon after, the FIFA U-17 Women’s World Cup in Jordan, then the FIFA U-20 Women’s World Cup before the AWCON.

But yet again, it’s the sole target of the Super Falcons to defend their title on the continent, the Falconettes to dominate the U-20 World Cup and the Flamingos to excel at the U-17 stage.

All these on the proverbial empty tank? I don’t think so.