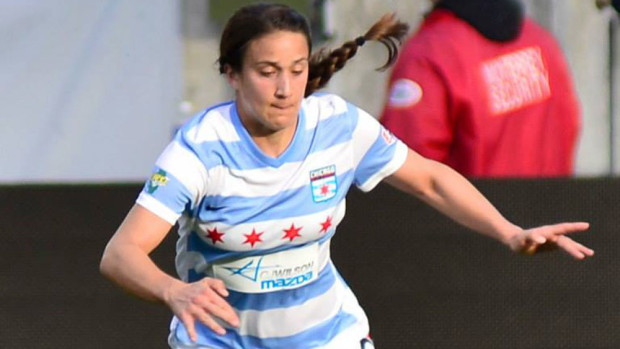 Jen Hoy will be a player the Red Stars call on to help pick up the scoring slack in the absence of Christen Press.. (Photo Courtesy Chicago Red Stars)

It’s Week 11 and the U.S. internationals–plus Canada’s and Brazil’s–are off at Olympic camp creating a very different look to the league. There won’t be much time left when the Olympians return so the bubble teams will want to be at their best.

What to watch for: Last time the Red Stars went without their U.S. internationals Rory Dames excoriated them for their pace of play and decision making. That said the World Cup break was one of the best times of the season for the Red Stars in 2015. As for the Flash they will be without Sam Mewis and Jaelene Hinkle but should be ready to unveil Lianne Sanderson after she was acquired from the Pride the week before last. Sanderson could slide right in for Mewis and be a force underneath the suddenly explosive trio of Lynn Williams, Jess McDonald, and Makenzy Doniak.

What to watch for: These are interesting times for the Spirit who looked like world beaters two weeks ago against Orlando but were a step off in a loss to Sky Blue last week. Crystal Dunn is gone for the month which will take some of the discussion off the fact she has yet to score this season but it will also shift more pressure to the other forwards who have not clicked as well or as often as Jim Gabarra was probably hoping. At least they won’t have to see Becky Sauerbrunn on the Kansas City backline. Sauerbrunn or not though, FC Kansas City has stabilized things in back during a four-match unbeaten run that followed a six-match winless streak to open the season. They still struggle to score though and the absence of Heather O’Reilly will be difficult to overcome from an energy standpoint. The Blues have also struggled for an answer at attacking central midfield so if the Spirit can dominate that area it could be the factor that swings this one in their favor. Washington is the only NWSL city (outside Orlando) where FC Kansas City has never won.

What to watch for: The Breakers are a mess at the moment with only three goals on the season. They finally scored in the run of play in Western New York last week and promptly conceded three in the next seven minutes on the way to a 7-1 loss. So heading to Seattle to face a Reign team they have never beat figures to be a daunting task. Libby Stout is doubtful again for the Breakers and backup Jami Kranich has allowed 11 goals in her two starts this season. The Reign have yet to get things sorted offensively as evidenced by having only one win from their current streak of four straight shutouts, and this week they will be down Carson Pickett (red card) and Merritt Mathias (suspended). That could help swing the depth and bench battle in the Breakers’ favor but their current form is not good enough to beat even an average Reign club.

What to watch for: The Thorns’ 11-game unbeaten streak is the second longest in NWSL history (Reign, 16 games in 2014) and has them more than halfway to an unbeaten season. A tough stretch starts with six starters already off to Olympic camp and Amandine Henry set to join France after this weekend (France allowed her to play one more match before joining camp) and backup defender Meg Morris now gone for the season with a broken hip. In Sky Blue they will find a team that has improved with the arrival of Leah Galton and Samantha Kerr and a building confidence that allowed them to perfectly execute Christy Holly’s game plan in a decisive, 2-1 victory at the Spirit last weekend. If Holly elects to use high pressure again it could be a long evening for the Thorns’ second stringers.