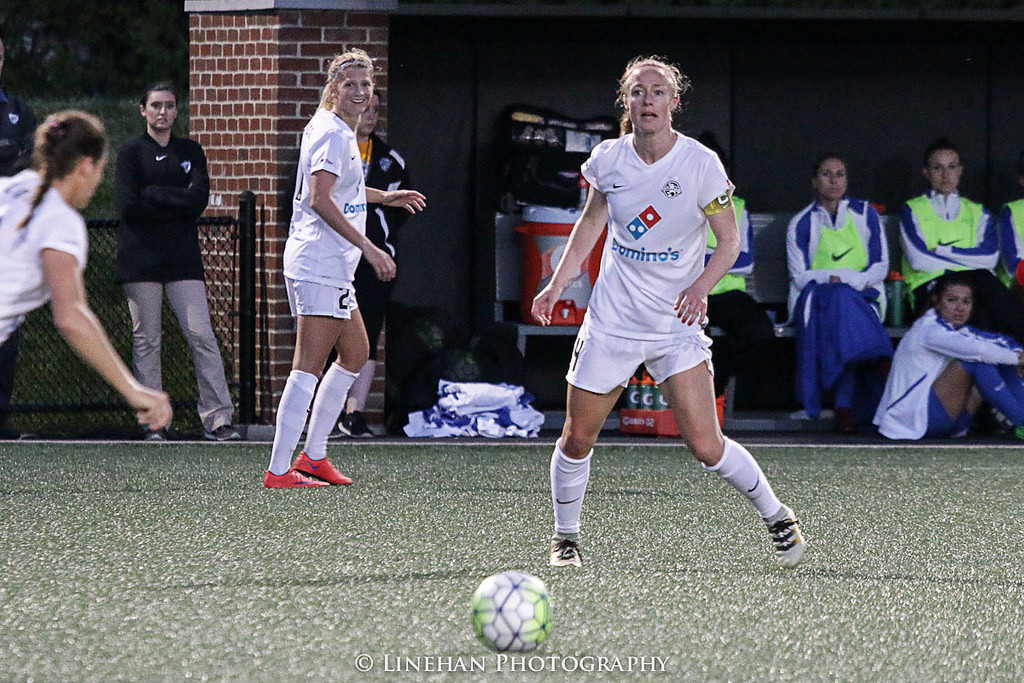 KANSAS CITY, Mo. — The Seattle Reign and FC Kansas City battled in the last two NWSL championships. If the season ended today, neither team would be included in post-season play. That being said, any game featuring teams coached by Vlatko Andonovski and Laura Harvey are guaranteed to be entertaining. Here are my thoughts on Saturday’s match.

Kansas City Summers are hot: With game time temperatures around 95 degrees and humidity levels making it feel close to 100, this game was hot. FCKC is no stranger to hot games. In the 2014 NWSL semifinal temperatures on the turf field were showing at 136 degrees. Saturday the teams were allowed a three-minute hydration break in each half to try and combat the dangerous temps.

No love lost: Whether it was the heat or the familiarity, these teams came out a little more physical than in previous matches. FC Kansas City’s Shea Groom and Seattle’s Merritt Mathias got mixed up after a corner-kick early in the match. According to some reports, Mathias took offense to Groom’s aggressiveness in the air. Rather than walk away, she held Groom’s head down in the grass and aired out her grievances.

The center referee missed the whole exchange and his assistant wasn’t able to help shed more light on the manner, so both players got a stern talking to. As the game progressed and more collisions occurred, referee Greg Dopka tried to regain control. Desiree Scott and Becky Sauerbrunn earned reckless foul yellow cards, while Seattle’s Rachel Corsie earned her own yellow for a handball at midfield.
Perhaps on the side of over correcting, Dopka showed a straight red card to Seattle’s Carson Pickett for a studs up challenge in the 90th minute. While correct in the letter of the law, her challenge seemed a little loose and not particularly dangerous to the spirit of the law. However, Seattle rallied their defense and were able to hold off short-handed in the final five minutes of the game.

FC Kansas City’s finishing: After the opening 15 minutes of the match, FC Kansas City seemed to take control of the game and pushed Seattle’s defense into their own penalty box on several occasions. The Blues earned 13 corner kicks throughout the match, all of them after the 18th minute. Seattle earned six, with four of them happening before the 15th minute.

Andonovski wasn’t discouraged by his team’s lack of conversions. “The fact that we had that many corner kicks…is a pretty good indicator that we were close to their goal much of the night. We’ve got to give them credit, they defended well. It’s not that we did a bad job, they defended well. You know, Hope Solo came out strong and got the ball. We’re not going to give up and say we can’t score on the corner kick, in fact we scored the game-winner on the corner kick last week!”

Overall, FCKC’s coach thinks that his team is just missing a few touches here or a few bounces there and is happy with the progress the offense is making.

Seattle’s finishing: On the other side, Laura Harvey sees a different challenge for her team’s offensive woes. For the 3rd time in four games, Seattle has been unable to find the back of the net.

On tonight’s match, Harvey said, “You saw what both teams are struggling with at the moment and that’s putting the ball in the back of the net. It’s always a tactical game when we play these guys so we’re happy with the point, but disappointed we didn’t create more chances.”

Having Manon Melis back will help to relieve the pressure on Matthias and Beverly Yanez, but Harvey also looks forward to Nahomi Kawasumi and Rumi Utsugi joining the squad within the next week or so.

“The girls worked really hard tonight; they put everything out there…but we just need a little more quality and hopefully those guys can add that.”

Game extras: Prior to tonight’s match, FC Kansas City held a check presentation ceremony for the players affected by the house fire in Washington prior to the season. Tiffany Weimer, who has been training with the Blues was on hand to accept the check for $5,000 (the others are Tori Huster of the Spirit and Britt Eckerstrom of the Flash). The money was raised by a special auction organized by Yael Averbuch and matched by FCKC’s ownership.

At halftime the Missouri National Guard held a special swearing-in ceremony for about 20 new soldiers, followed by a very moving rendition of Lee Greenwood’s ‘Proud to be an American’ by Dontarius Young. For those unfamiliar with Young, he gained internet stardom when he was caught on video singing the song for the patrons of the Chick-fil-A he worked at on Veteran’s Day.