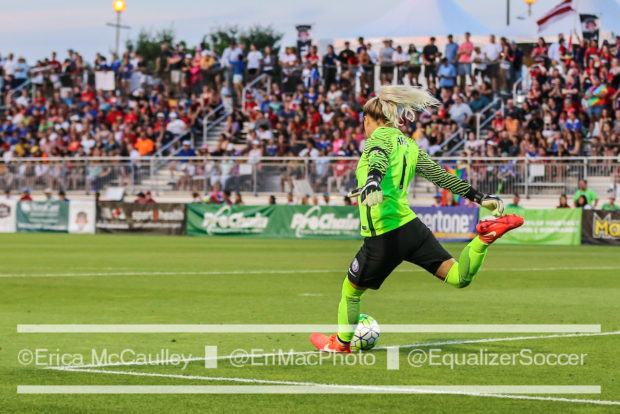 Jasmyne Spencer’s dramatic, stoppage-time goal kept the Orlando Pride perfect at home on the wings of a 1-0 victory over the Houston Dash. The winner came moments after Ashlyn Harris made two remarkable saves to keep the Dash off the scoreboard.

With the Dash facing a fifth consecutive game without a goal and the Pride their fourth, Rachel Daly unleashed a bicycle kick from eight yards out that Harris was able to knock to relative safety despite initially shifting her weight away from the shot. Amber Brooks ran the ball down for the Dash and sent a cross back to the top of the six where Harris rose to the challenge again with a save on Cami Privett’s redirect.

The Pride then found the winner when Jasmyne Spencer played a wide ball for Alex Morgan and then got lost between Dash defenders while Morgan’s cross was deflected to fell to Jamia Fields and then to Sarah Hagen. With Spencer camped out just above the six and barely onside, Hagen played her a cross that Spencer volleyed out of the air with her right foot for her first goal as a Pride.

The Dash have now dropped five consecutive games, all by the same 1-0 score. Their current streak of futility has reached a club-record 470 minutes. But Harris’s two late saves were hardly their only chances. Minutes earlier, Rebecca Moros got on the end of a ball that had bounced around inside the box and could have had an easy goal if she took one extra second to settle it and tap it into an empty near side of the net. Instead she frantically headed the ball and it slowly but harmlessly skipped wide of goal. A first half chance saw Daly sent a blistering cross to an open Denise O’Sullivan but the Irishwoman was not able to find the frame and sent it wide.

The Dash (2-6-1, 7 pts) do not see the field again until July 9 when they play at Sky Blue. The Pride (5-5-0, 15 pts) moved to within the goal difference tiebreakers of the final playoff spot, are right back at it Sunday when they host the undefeated Thorns.

Spencer’s winner was the first goal this season that decided the result of a match in the 90th minute or later.