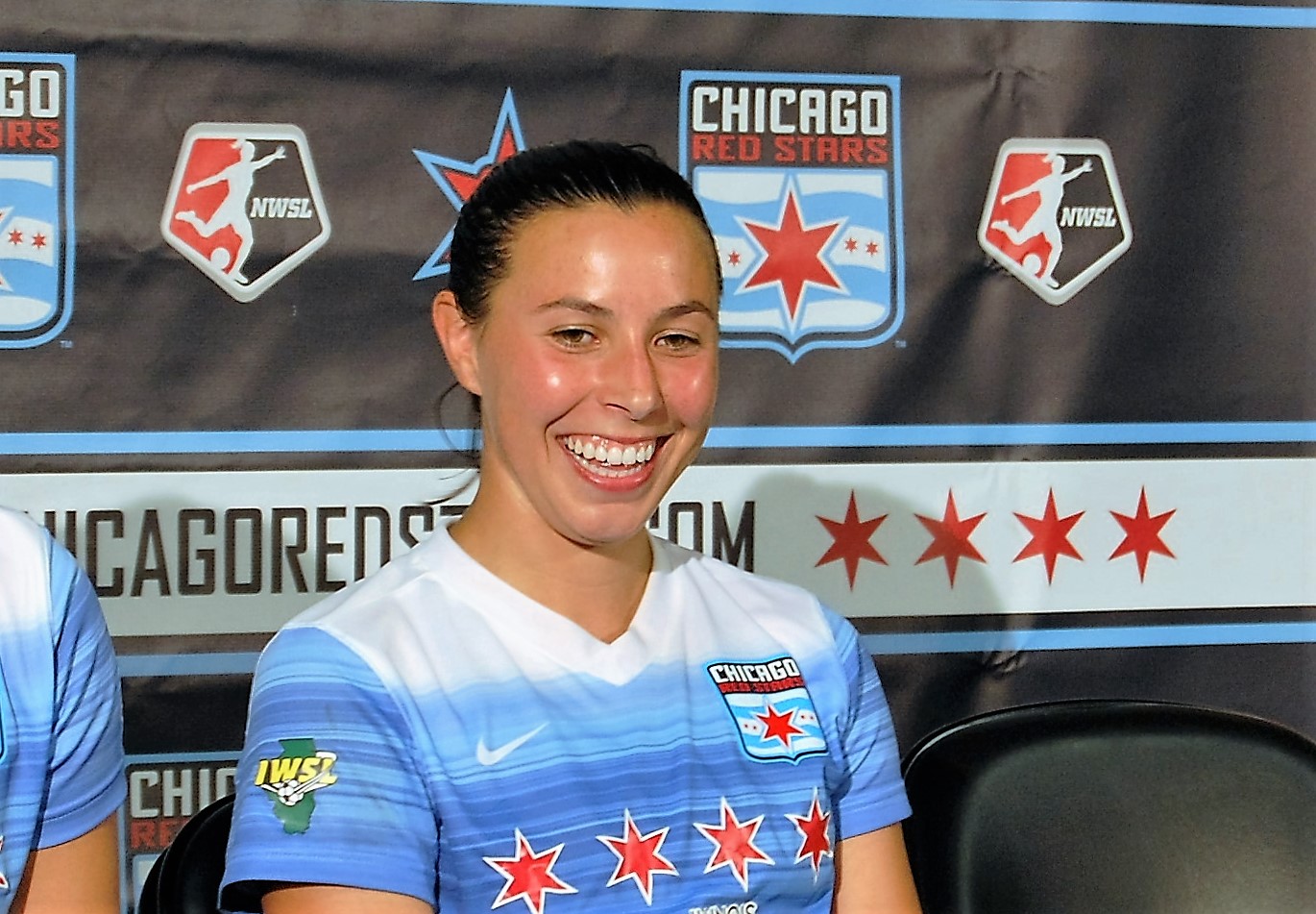 Heading into Week 10—the halfway point of the 2016 season—the Chicago Red Stars sit atop the National Women’s Soccer League.

And while most fans are familiar with Chicago’s star players, including U.S. internationals Christen Press, Julie Johnston and Alyssa Naeher, the contributions of hidden gems like midfielder Vanessa DiBernardo have gone largely unnoticed.

Building on a 2015 campaign that saw the team earn its first playoff berth in league history, the 2016 Red Stars have already taken 18 points from their first nine games. Even scarier for Chicago’s future opponents is the fact that DiBernardo thinks the team still hasn’t maxed out its potential.

“We have a lot of room to grow still,” said DiBernardo, speaking to The Equalizer. “I still don’t think we’ve hit our peak, or had a peak performance—which is definitely a positive for us to feel that we [still] have room to grow.”

Over the past three seasons, no Chicago player has earned more minutes than DiBernardo, and she enters this season coming off a winter loan stint with Australian side Perth Glory, where she scored the W-League’s Goal of the Year. The midfielder attributed the loan with helping her get off to such a strong start in 2016.

In addition to getting more game experience, her experience in Australia helped DiBernardo tackle a new challenge—being away from home. The Naperville-native played collegiately at the University of Illinois—only a two-hour drive down I-57—and then immediately came back to Chicago to play professionally after the Red Stars drafted her following her senior season with the Illini.

“I’m definitely lucky to play in Chicago where I was born and raised,” explained DiBernardo. “It’s nice to be able to have my family around and my friends around for support. I think it’s definitely a benefit, but again, I’ve always been in my comfort zone here. That’s definitely one thing that going abroad—playing somewhere outside my comfort zone—helped me grow as a player.”

The University of Illinois alumna wasn’t able to play in the off-season after her rookie campaign in 2014, instead heading back to Champaign to finish school that fall. She said that made it difficult to stay sharp for the 2015 season and helped her realize the need to keep playing this past winter.

“It was definitely a good experience for me and I definitely enjoyed being able to play in the off-season. After my first year [in the NWSL], I went back to school and didn’t get to play any games until the following year,” she recalled. “That was tough and after going through that I definitely knew I wanted to go play [abroad] and it would definitely be something I’d look into for next year [as well].

“Now they try to plan it where you finish [college] a semester early,” DiBernardo later added. “When we started school, there wasn’t a league so we didn’t plan to finish ahead of time. A lot of players my age, and the year after, just went back that following semester, in the fall, and finished then.”

After her loan experience, DiBernardo also agreed the W-League and the NWSL could benefit from a more formal partnership.

“There are a lot of U.S. players who do go over there and play,” she noted. “You’ll see at least one or two Americans on each team when you go to play the different teams in that league. I think it would be a great partnership and it does allow players here to continue to play in the off-season, still create an income and still develop when they’re not playing in the NWSL [off-season].”

For Chicago, DiBernardo is playing a slightly different role this year. After lining up primarily as the team’s No. 10 last season, she is now playing slightly deeper, but insists she is comfortable in the new position.

Head coach Rory Dames agrees, calling DiBernardo “our most consistent player all the way through the year.” After Saturday’s match against Boston—where DiBernardo notched two assists in a 3-0 win—Dames also praised the amount of ground she covers, the number of passes she completes each game and her soccer IQ.

“I think she’s been fantastic this year,” added Dames. “She’s been our best player, in [terms of] overall performance, from start to finish.”

The Red Stars seem to be reaping the rewards of moving DiBernardo further back on the field, as her calmness in possession—even under heavy pressure—helps the team work the ball out of the defensive third and transition into their attack. DiBernardo says she learned to value possession from her father, Angelo.

“Growing up, my father was my coach and he’s always valued possession—that’s how he learned and taught the game—to possess the ball,” said DiBernardo. “That has just been instinctively put into my brain and that’s just the type of player I am. I value possession and try to keep the ball as much as I can.”

Check out Vanessa DiBernardo’s determination yesterday to possess the ball out of her defensive third. #crs07 pic.twitter.com/lTzteB3aop

Angelo DiBernardo represented the United Stars on the international stage in the 1984 Olympics and Vanessa followed in her father’s footsteps, helping lead the U.S. U-20’s to a World Cup title in 2012. While she has never been capped by the full national team, DiBernardo does has one senior team call-up under her belt and says the thought of representing the U.S. still lingers.

“It’s definitely a thought you keep in mind when you’re playing and training with some of those players that do play for the national team,” she acknowledged. “I try not to get hung up on it, I just go and perform and do what my coach is asking of me.”

In the 2012 U-20 World Cup, DiBernardo started all six matches and played alongside a number of players who have since made the full team, including Julie Johnston, Crystal Dunn, Morgan Brian and Samantha Mewis. DiBernardo says having that experience gives her the confidence that she can compete at the international level if given the chance.

“It’s great to see all those guys from the U-20’s during my cycle be incorporated with the national team camp after camp. I’m very happy for those guys. It definitely gives you that thought that it could happen because you have played and trained with those players before,” she explained.

As Chicago heads into the second half of the 2016 season, DiBernardo knows there are still challenges ahead, including what will happen when the international players leave for the Olympics.

“We need to stay confident as a group,” said DiBernardo. “Last year when we lost our players for the World Cup, we went on a great run. We’re capable of doing it [again] and we just need to be confident in each other.”

DiBernardo also knows her role will change during the Olympic period, and fans of the Red Stars may have already seen one way that will happen. When the U.S. internationals were away two weeks ago for their friendlies against Japan, DiBernardo captained the squad for the first time in her career, something she says was a great privilege.

“It’s definitely an honor and a tribute to the people who have worn the armband like Lori [Chalupny] and Michelle Wenino (Lomnicki)—players that have led by example,” said DiBernardo. “I really learned from those guys and the previous captains we have had really showed a good example of what it means to be a captain of the Red Stars.”

“It’s definitely going to be a loss when we lose those three players for the Olympics, but if we’re able to grow during that time, we’ll definitely be ready and in a good position at the end of the year.”