Soccer in Maryland, but hearts in Orlando 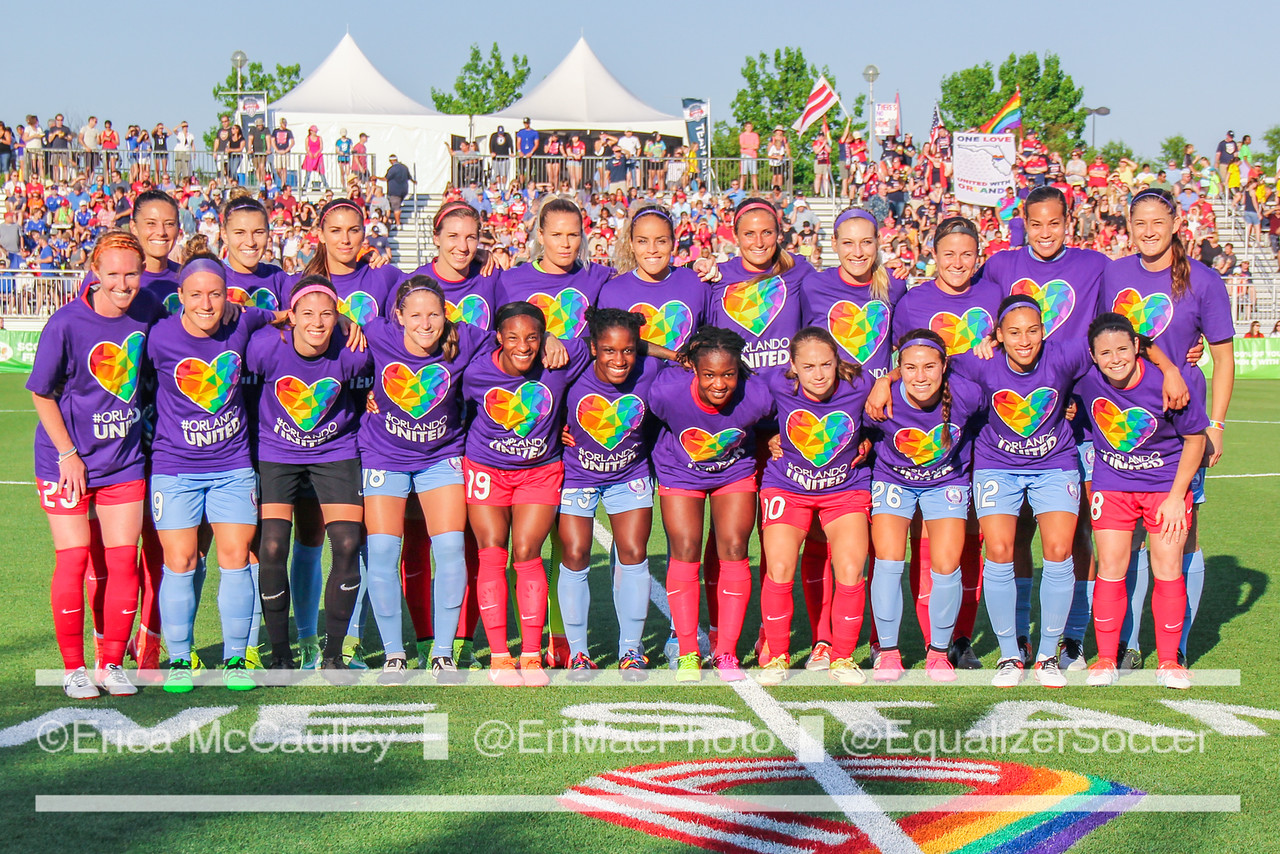 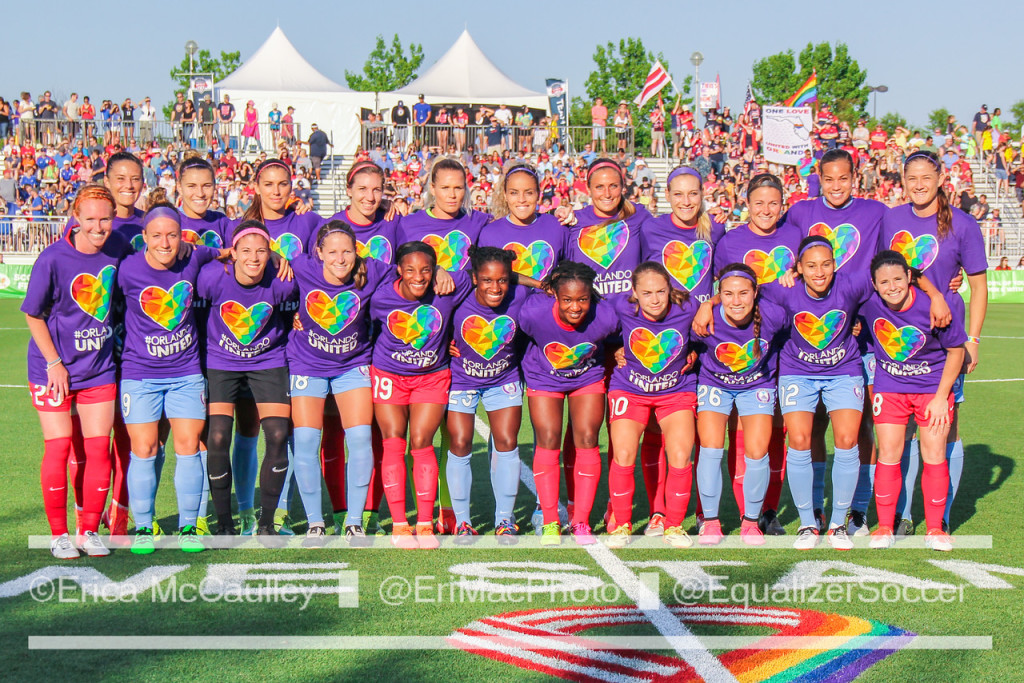 The Washington Spirit and Orlando Pride join for a photo, wearing #OrlandoUnited shirts in honor of the 49 lives lost in the Pulse nightclub shooting. (Photo Copyright Erica McCaulley for The Equalizer)

BOYDS, Md. — Boosted by a strong first-half performance, the Washington Spirit earned its first victory in a month over the visiting Orlando Pride, 2-0 on Saturday. Although the game was important given both teams’ performances in their last few outings, the real significance of the match went well beyond any box score or standings.

Spirit and Pride honor those impacted the Orlando shooting

When events like what happened in Orlando a week ago take place, often words are difficult to muster and at times even ring hollow. In times of tragedy, sports become an outlet for the deep well of emotions these acts of hate conjure and become a way to express the almost inexpressible. Watching an entire stadium of people fall silent in honor of the victims and then later applaud them, shows why those who dismiss sports as “just games” with no impact beyond win/loss columns are off the mark. Head to the 1:37:10 mark:

While those who tuned into Saturday’s game saw a pretty good soccer match, they saw an even better display of human compassion and solidarity. Pride goalkeeper Ashlyn Harris, who endured a postgame interview where all the questions were either directly or indirectly about the tragedy and its impact on the team, summed up the meaning of that moment far better than this writer could.

“The beauty of this game is that it brings people together that’s why we do what we do,” Harris said, “Today if you look at the crowd, there’s not Washington Spirit fans versus Orlando Pride fans. Today we were just one collective group coming together to celebrate the lives of the people who didn’t make it out of Pulse and the victims’ families. So today was just about honoring them and that’s taking a few moments out of our game and paying our respects and being grateful that we’re still here and we get to do what we love every single day but it was more than just about us. It was about bringing this entire place together.” 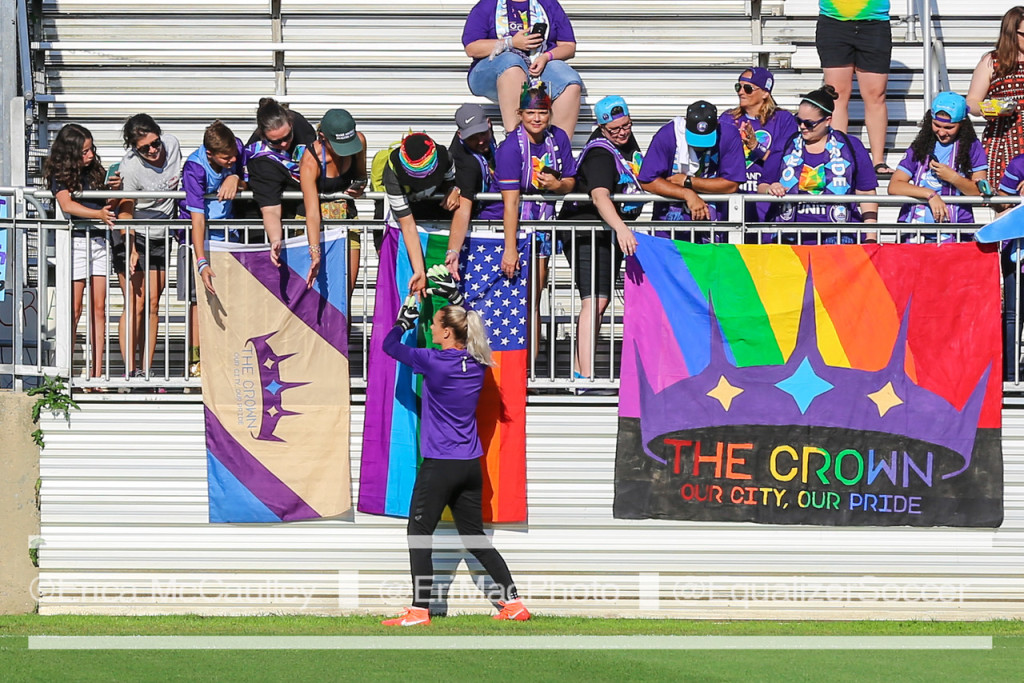 Suffice it to say, the last couple of outings have been lackluster by the Spirit offense. On Saturday, a frontline of Crystal Dunn, Francisca Ordega, and Estefania Banini caused problems for Orlando’s back line. If not for the Pride coming out unscathed on a couple of chaotic sequences in and around their 18-yard box, the score would have been even more in Washington’s favor.

Although some are voicing concern about the fact that Dunn has yet to tally a goal this season, Dunn showed Saturday why her scoring isn’t necessary for the Spirit to be victorious. Two players who notching their first goals of the campaign now could be important for the team’s momentum once Dunn and the other Rio bound players leave following next weekend’s match.

[RELATED: Spirit shut out Pride in front of record crowd at Plex]

Postgame, Spirit head coach Jim Gabarra talked about the offensive weapons at his disposal and the personnel decisions he made offensively for the match. A few weeks prior, after the Spirit’s previous home game against Houston, Gabarra stated that despite the fact Ordega hadn’t made a game-day roster to that point, the team was going to need her. His comments after that game seemed almost prophetic on Saturday. He credited Ordega for making the most of her time on the field.

“Franny has been doing great and she’s been patient and took advantage of her opportunity tonight,” Gabarra commented. “We looked at their back line and we felt that having some more athleticism up there and giving Franny a chance this time was right to do it.” 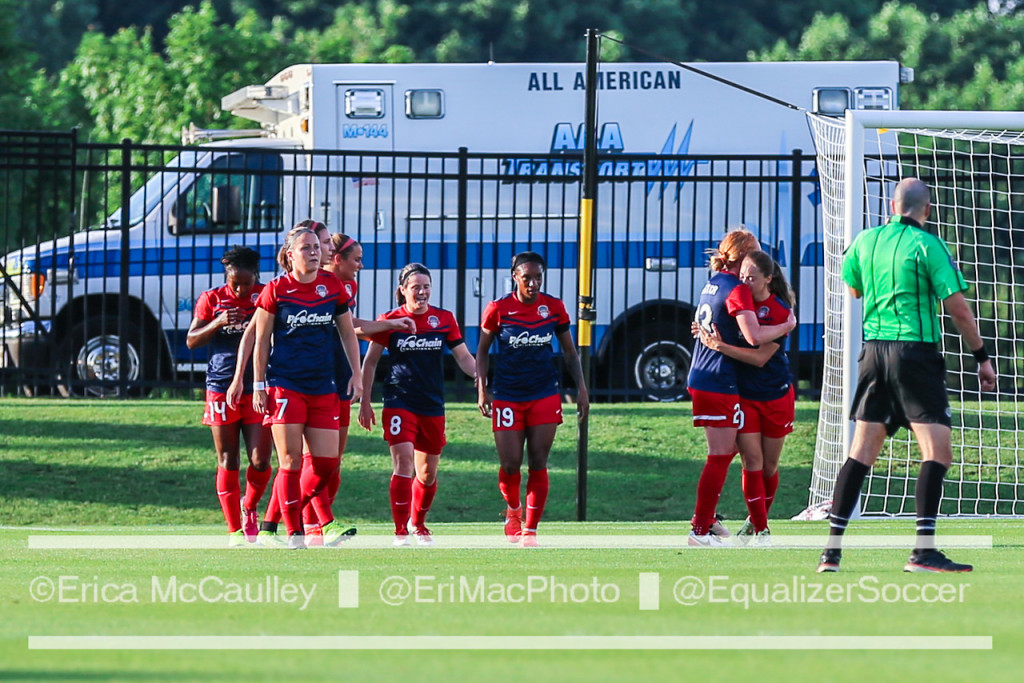 Washington was sublime on Saturday. (Photo Copyright Erica McCaulley for The Equalizer)

Harris admitted that the two goals allowed by her team in Saturday’s contest were her team’s fault and were preventable. To a degree, the Orlando goalkeeper is right. Alyssa Kleiner’s cross into the box that led to Banini’s goal was largely unchallenged by the Orlando back line. Any time a cross finds an attacking player’s feet inside the six-yard box, it spells trouble for the defense. Banini was given too much space to operate so close to goal. Although the Orlando defense provided Banini the chance to display her technical skill, to say that goal was Orlando’s fault entirely would discredit composure on the ball and placement the Argentine displayed.

Ordega’s goal in the 40th minute is slightly more complex. Laura Alleway was on the ball directing a teammate as she looked to pass the ball, when Ordega turned on the jets and came away with the ball after a physical challenge. The challenge was so physical in fact that it left Alleway unable to continue in the match.

On replay, the Pride’s protests for a foul on Ordega have merit. Even if the whistle had blown, though, Alleway was a bit too lackadaisical with the ball prior to the turnover. With a player with the speed and athleticism of Ordega, there’s always a chance for the defender to suddenly be under pressure.

Of course, there were other moments in the game where the Spirit had Orlando on its heels in and around the area. On a few of those opportunities, Orlando’s inability to clear also gave the Spirit some quality second looks at goal. A key to Orlando earning points moving forward will definitely be tightening up on defense, which has been an issue throughout the season.

Orlando returns home to face Portland next weekend while the Spirit continues its home stand against Sky Blue.