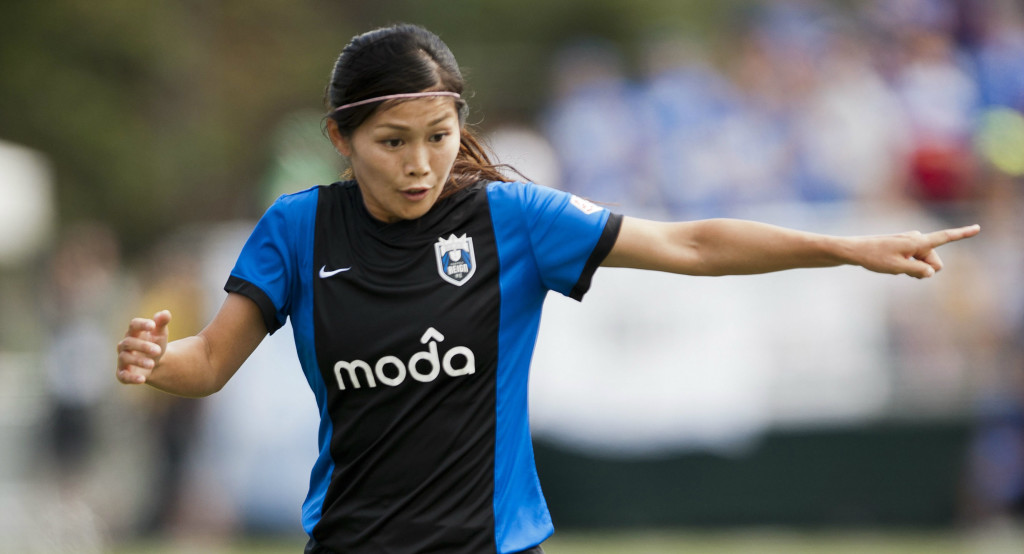 Japan forward Nahomi Kawasumi has signed with Seattle Reign FC, for whom she played in 2014. (Photo Copyright Patricia Giobetti for The Equalizer)

Japan forward Nahomi Kawasumi is returning to Seattle Reign FC, the club announced on Thursday. She is expected to arrive in Seattle in the next 10 days.

Kawasumi was a major part of Reign FC’s massive turnaround in 2014, going from the club which finished second from bottom in the NWSL’s inaugural season to NWSL Shield winner and league runner-up in 2014, feats which Seattle would match in 2015.

But Kawasumi was only around for the 2014 campaign, on loan from Japan powerhouse INAC Kobe Leonessa. She returned to INAC for 2015 and part of the 2016 campaign.

“I’m back to Seattle again, and I’m so happy to join Seattle Reign FC.” Kawasumi said. “I will do my best for the team.”

[THE LOWDOWN: Andonovski acknowledges FC Kansas City is in transition]

‘Naho,’ as she is best known, scored nine goals and added five assists for Seattle in the 2014 NWSL campaign, earning NWSL Bet XI honors. Kawasumi made the shortlist for FIFA World Player of the Year in 2014. She is best known for her pinpoint crosses and superior passing vision which lines up perfectly with Seattle’s tiki-taka style of play.

Seattle will welcome the star with open arms. The Reign currently sit in the bottom half of the table as the season approaches the halfway mark, sporting a record of 3-2-3 (11 pts.) in sixth place.

“We are extremely happy to bring Naho back to Seattle,” said general manager and coach Laura Harvey. “She was a huge influence on our group when she was a Reign player before and having someone of her quality and experience back with this team is really exciting.”

Kawasumi represented Japan at the 2011 and 2015 World Cups and the 2012 Olympics, helping the team win the 2011 World Cup and finish runner-up to the U.S. in the other two competitions. She has 82 international caps. She helped lead INAC to three consecutive Nadeshiko league titles from 2011-2013, winning league MVP honors in 2013, when she played alongside current Seattle forward Beverly Yanez.