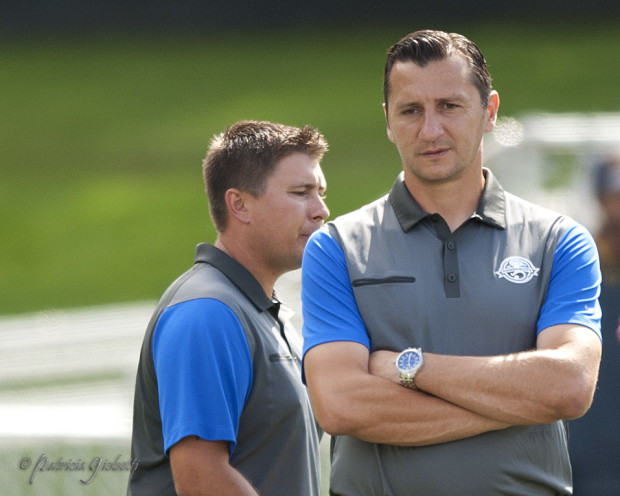 Vlatko Andonovski, right, is guiding FC Kansas City through something of a transitional season. (Photo Copyright Patricia Giobetti for The Equalizer)

Just about every time FC Kansas City has been and will be mentioned this season it comes with the addendum that they are two-time defending champions. And defending champions they are, if you look at things from a strictly linear standpoint. But the Blues’ roster took a beating over the winter so the club’s 1-4-3 start that has them resting second from the bottom is not as big a surprise as say the Reign struggling to find their way over .500.

To review, here is what happened to FC Kansas City’s roster over the winter. Amy LePeilbet and Leigh Ann Robinson (Brown), who both played every minute of the 2015 season, retired. Lauren Holiday, the engine midfield for three seasons, also retired. Up top, Amy Rodriguez went on maternity leave. General manager Huw Williams went to the trade market and brought in Sydney Leroux. And then Leroux went on maternity leave.

“Obviously we lost a big core of the team (from) last year so we knew that this was going to take some time,” Heather O’Reilly said. “Obviously you don’t want to continue to keep saying that.”

Vlatko Andonovski, head coach and part architect with Williams of the league’s most consistent and successful team of the first three seasons, is also realistic. “We know that we have a completely different team now. We’re missing six starters from the championship team. In eight games we’re starting three draft picks (none of them first round picks). It’s a different challenge, but it’s an exciting challenge.”

Even though the record is poor, the Blues are hardly getting blown off the pitch. Andonovski quickly scrapped a season-opening 3-5-2 that featured a back three made up of all center backs and that the coach admitted did not work very well. Even at that they lost 1-0 when the Flash won a penalty on a ball that glanced off Becky Sauerbrunn’s elbow in the box and would have escaped with a draw if not for O’Reilly’s penalty ringing off the post in stoppage time.

A week later it was Shea Groom who misfired on a penalty against the Thorns and was later sent off leaving FC Kansas City to defend a 1-0 lead with 10 women for nearly the entire second half. That one ended 1-1. Against the Dash, the Blues were mostly the better side but were made to pay for a lapse that lasted no more than 10 minutes but led to a pair of Dash goals.

“It seems like this season nothing goes right for us,” Andonovski said before running down a few of FCKC’s toughest results of the season. “It’s there. But we’re just going to have to fix those little things that so far are not going our way.”

One of those little things, or not so little things when it doesn’t go well, is set piece defending. On Saturday, Sky Blue tied the match on a penalty kick which was called after a medium-dangerous free kick got away from Nicole Barnhart—possibly with some help from the sun. The resulting chaos concluded in O’Reilly taking down a Sky Blue player by the near post.

“In general I think it’s mentality more than anything else,” Andonovski said about set piece defending. “There is just a little margin for error that if you’re two inches behind the player or two inches beside the player that can make a difference. That’s something that we’re going to have to fix and keep fighting for that inch or two.”

O’Reilly said the penalty call was “interesting” and Andonovski subtly hinted that the foul leading to the free kick that led to the penalty may have been a questionable whistle. But in fairness the Blues probably got away with one a few minutes earlier when Sky Blue forward Kim DeCesare’s header hit the underside of the crossbar and appeared to cross the line comfortably before coming out. The assistant referee saw it different, and play continued.

Last week’s trade that saw FC Kansas City send highly-regarded backup goalkeeper Katelyn Rowland to the Flash for two second round picks may be a subtle indicator the club is already beginning to think about 2017. For Andonovski’s part he said that despite the club already slipping eight points adrift of a playoff spot with five teams to climb over, his side will doggedly pursue a berth until the mathematics say there is absolutely no chance. If that happens, he said, they will go the rest of the way for pride. And he said this season has made him a better coach than the last three when he believes the Blues, “were starting to change the culture in women’s soccer.”

“Everyone has bought into it,” Andonovski said of the transitional season in Kansas City. “They know that it’s not going to be easy, but eventually it’s going to make us better. And not just better, I think it is going to bring us closer. All this adversity brings camaraderie and the players enjoy the experience.”

Here are the attendance numbers for NWSL Week 8 plus season totals with comparisons to the same number of home dates in 2015.

{MORE: See how Mia Hamm & friends are paying it forward to youth soccer}

-Since we last posted a Lowdown the Flash went from having three second round picks in 2017 to none. They traded two to FC Kansas City for goalkeeper Katelyn Rowland, and the remaining pick went to the Breakers for McCall Zerboni. The highest of those three picks will go to the Breakers with FC Kansas City getting the other two. The Flash had previously acquired 2nd round picks from the Dash and Pride to go with their own.

Former captain McCall Zerboni returned to the Flash in a trade this week. (Photo copyright Meg Linehan for The Equalizer)

-There seems to be some internal dispute happening between Sky Blue FC and Orlando Pride over the status of Caitlin Foord. Last week a source told The Equalizer that the Pride were working hard to acquire Foord’s NWSL rights from Sky Blue. Later that day a different source piped up saying Sky Blue had no such contact with the Pride. Foord, a three-year fixture in Sky Blue who came up in Australia when Pride coach Tom Sermanni was coaching the national team, elected not to return to New Jersey this season. At this point the Olympics are probably too close to have Foord return to the U.S. until they end, but it would not be a surprise to see Foord somewhere in NWSL by the end of this season.

-The rained out match between the Dash and Spirit from May 27 has been rescheduled for Thursday, August 18. That will mark the end of the league’s Olympic break which begins August 1 and was previously scheduled to end with the August 26 Spirit-Pride match. That means U.S. national team players won’t be there which serves as a wash since they were not available the night of the postponement. But players from other Olympic countries, notably Canada and Australia, will almost certainly not be available.

-The latest injury report lists Breakers midfielder Sinead Farrelly as out for the season. The nature of her injury has not been disclosed.

-The Spirit have announced that Saturday’s match against the Pride is sold out.

-NWSL, with approval from FIFA, has moved the summer transfer window up to June 15-July 14. Originally the window was set to run July 4-August 3. The adjusted dates could make for Amandine Henry to be available for the Thorns this weekend. It could also expedite the arrival of Rumi Utsugi to the Reign.

-If you followed WUSA and have an excellent memory you might remember Katie Barnes who was drafted 9th in 2002 by the Carolina Courage and later won Founders Cup II with the club. Barnes turned up in the news last week when she was shot in the abdomen in Warren County, Ohio where she is now a sheriff’s deputy. Barnes is expected to make a full recovery. Hat tip to Jen Cooper of keepernotes.com for bringing this to our attention. Read the full story here.

— Here is my Player of the Week ballot:
1) Becky Sauerbrunn – Turned in another stellar performance at the back for FC Kansas City, roaming from end line to end line to get in the way of most of what Sky Blue had to offer in the attacking third; 2) Lydia Williams – The only reason the Reign were held to a single goal against the Dash on Sunday and may very well have had a clean sheet if her defense had even considered closing down Havana Solaun; 3) Emily Sonnett – Turned in a steady, mature effort to help keep the Thorns undefeated and has quietly held down the fort in the absence of injured veteran Kat Williamson. (full disclosure: I made my votes before watching the Flash-Pride game and did not use anyone from that match.)

— Crystal Dunn is playing some excellent soccer, but I’m beginning to worry some about her lack of a goal. It’s not so much that Dunn cannot contribute to Spirit wind without scoring. But of late she seems to be making reckless attempts to take on defenders instead of staying patient and using her sometimes otherworldly holdup skills to let attacking plays develop. Of course Dunn is more than capable of turning those situations into highlight goals, but the personnel around her this season is too good to be doing it, especially when seven games into her season, the goal tally sits at zero. She is bound to break out sooner than later, but some of the signs are troubling.

— Thoughts on the Rowland trade: The Flash are stockpiling goalkeepers especially with Britt Eckerstrom responding with a Player of the Week shutout to make it 180 minutes and no goals allowed as a pro. The two second round picks will be a steep price to pay for Rowland especially if she does not wind up as the keeper of the future in Western New York. It’s probably a win-win for Kansas City who can probably grab the best keeper available in the draft with one of their acquired picks and still have the other one to play with. But in the short term they’ll have to hope Nicole Barnhart stays healthy with inexperienced Catherine Parkhill the new backup.

— Thoughts on Zerboni trade: As Matt Beard told The Bent Musket, the trade of Zerbobi was brought on by her desire to be in Western New York. So right there the matter of what they got in return gets murky. The Breakers clearly did Zerboni a favor and it was not incumbent upon the Flash to pony up a top offer just to make it happen.

For the Breakers, the departure of Zerboni likely opens up playing time for No. 3 pick Christen Westphal. But it also means that the pick which was No. 2 overall in 2016 has essentially been flipped for a 2nd rounder in 2017. The original pick—which Sky Blue eventually used on Raquel Rodriguez—was traded to Portland for Zerboni and Sinead Farrelly, who is out of the season with an injury.

The Flash welcome back a popular member of title teams from days gone by and continue to slowly mold the club in the image of first-year coach Paul Riley.

— No player in NWSL can score a goal with as little time and space as Christen Press.

— Like everyone else I have strong feelings about the horrible massacre at Pulse Night Club in Orlando over the weekend. This space though, will continue as a place to discuss women’s soccer with this column specifically focusing on NWSL. What incidents like these do though, is they narrow most haps that separate different people, mostly because any one of us could have been involved in some way, or could be involved in the next one. Here is one example of how the deadly night in Orlando impacted the sports world.