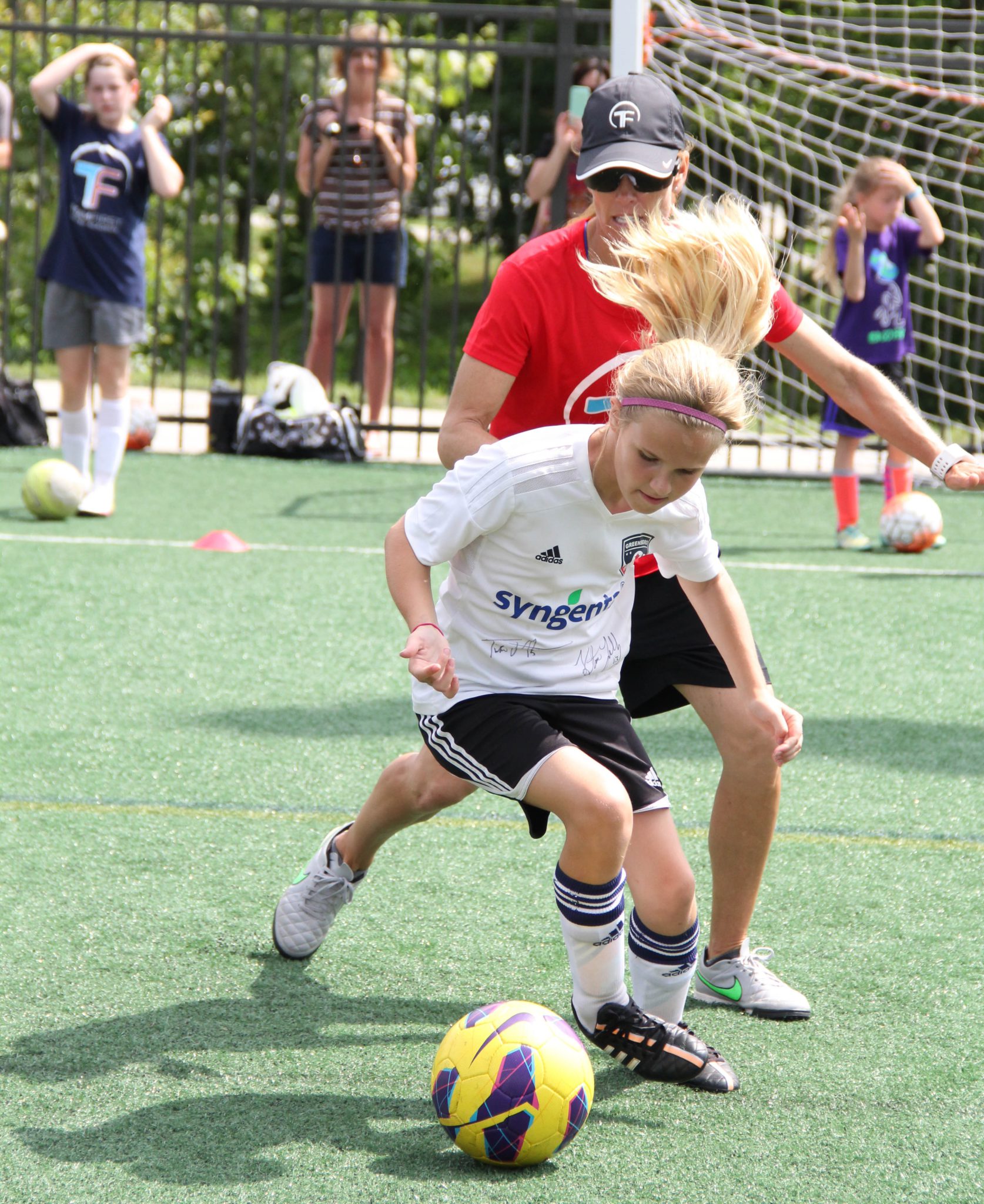 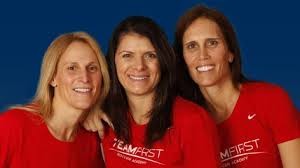 Check the signs again. Is this really Martinsville, Va.? You sure we’re in the small Southern Virginia town, the one with the NASCAR track? Okay, so what are those former U.S. national team players do here? They do, after all, have five Olympic Gold medals between them, and five World Cup championship medals, and a dozen NCAA championship rings. Haven’t the three of them have combined for 333 goals in 759 international matches?

Well, that’s them. Mia Hamm, Kristine Lilly and Tisha Venturini Hoch. They are at Smith River Soccer Complex in Martinsville early on a humid Saturday morning.
Why? The answer is simple.

“It’s important,” says Hamm, who along with Lilly and Venturini Hoch travel the country giving clinics with Team First Soccer Academy. “These kids are worth it.”

When Lilly, Venturini Hoch and Hamm realized that people wanted to hear from them and wanted them to be a part of their soccer development, they created Team First. Along with former University of North Carolina teammate Angela Kelly, a former Canadian national team midfielder, University of Tennessee coach and now the head coach at the University of Texas, the Team First crew runs clinics throughout the country, passing along their knowledge of the game and as well as a few important messages that sometimes get lost in the youth soccer structure.
“Believe me, Tish and I would have been perfectly happy naming it the Mia Hamm Soccer Camp,” Lilly told the 115 campers, ranging in age from six to high school, in a small Southern Virginia city more famous for its NASCAR track than anything to do with soccer. “But we decided on Team First, because everything we did as players was to help the team.”

Since their retirements, Lilly, Venturini and Hamm have witnessed a tremendous growth in youth soccer. And they’ve also seen the growth in the seriousness with which youth soccer coaches, parents and players approach the game. They don’t exactly see that as a problem in itself, not something that urgently needed fixing. They do, however, worry that kids are missing out on a couple important pieces of player development, namely fun and playing in an environment in which they are able to fail and learn from mistakes.

That’s why they are in their sixth year of offering camps and clinics with Team First. The 115 kids in Martinsville represent close to the maximum number they will allow in any one clinic. If the group is too big, they say, they can’t effectively reach each player.

“The wonderful thing about the growth of the game is that the kids get exposed to more competitive environments and higher levels of coaching when they are younger,” says Hamm. “The downside of that is that they are constantly being evaluated.  “What I shared with them is that we are not judging them out here. If you want to take on three players and see what happens, fantastic. If you get the ball stripped from you, that’s okay. We might point out something that will help them, but we are not evaluating.”

On this day, the 115 kids are divided into groups of eight and assigned a coach, an-ultra enthusiastic member of the Team First travelling staff.  While the USA stars wander around giving individual instruction to the players, it’s soon apparent that the support staff is filled with knowledgeable coaches giving quality instruction. Their expertise, though, is in bringing energy, passion and fun to a group of star-struck young soccer players.
“How you interact with people and the energy you bring is very important,” says Hamm. “I’ve become a firm believer in the energy. It’s not just what we say, it’s how we say it that helps get kids excited and confident in what they are doing.”

The campers will hear from Venturini Hoch, who will be able to explain, perhaps better than anyone, that winning is great but having fun doing it is much better. And she’s uniquely qualified to talk about winning, having compiled an astonishing record of 248-2-4 record between Grace Ann Davis High in Modesto, Calif., (151-1-3) and the University of North Carolina (97-1-1). And that was all before she won an Olympic Gold medal in 1996 and a World Cup Championship in ’99.

“We had so much fun when we played,” she said. “A lot of times, that gets lost when kids are playing. Sometimes, there is so much pressure on them, they play it safe. We want to show them that it’s okay to try something and mess up. We do it all the time.

“Kids are already looking to go to college, and the parents think they’re the next Mia Hamm. Just enjoy the moment and get out there and play.”

From the bleachers, Andrea Spencer watched as her 12-year-old daughter McKenna participated in the two-day clinic. To Andrea, it made perfect sense to make the hour or so drive from Greensboro, N.C., so her daughter could learn from the former USA stars.

Andrea, who just turned 40, falls into the category of “most of the people I meet these days” for Hamm, now 44. “I meet a lot of people now who say ‘My mom watched you play when she was in high school.’”

“I was thrilled with all of it,” Andrea says. “Here you have these legends of soccer, and they understand how to have fun and how important that is to the kids. McKenna had a smile on her face the whole time and she was completely energized by the whole thing.”

McKenna, who was named one of the Campers of the Day for her enthusiasm, passion and obvious love of the game, said she learned “several new drills and moves, which was great.” But she also took away some much more lasting, which, after all, is the whole point.

“Being at the camp and talking to Mia, Kristine and Tisha made me remember that they started out just like me, practicing in their backyards,” says McKenna “And if I want to and work very hard, I could be like them.”

Andrea’s not McKenna’s coach anymore, but she still coaches, and this past year started playing again. As she watched her daughter, she was “as engaged with the whole weekend as any of the kids.”

“It was neat for McKenna to be able to meet and work with players who were my role models. And now they are hers, too.”

For someone who played more international matches than any male or female player in history, passion is the key. Without passion for the game, Kristine Lilly would not have played 352 times for the USA over a remarkable 23 years, nowhere near it. And she would likely have retired well before reaching 39.

“For us, it’s just great to interact with the kids,” she explains. “We want to show them you can work hard, you can be great and you can have fun at the same time. We want them to know we are passionate about the game and let them see that passion come out in us. You can see it happen through the course of the day.

“And we do some silly stuff out there and that helps loosen them up. And you know we will be doing demos and fall down. We all have a good laugh. We want to show them that it’s okay. What is important is how you handle yourself after that.”

And that is one of the reasons Sue Hammond, a former medical trainer with the women’s national team, is a part of the traveling staff.

“Sue is here more for us than for the kids,” laughs Lilly. “We are always tripping over the ball or falling down. But it shows the kids that everyone messes up.”

Before the kids are divided up, Hamm, Lilly and Venturini Hoch take turns talking to the group. Hamm tells them that they are probably familiar with the drills they are about to perform. But she wants them to work on performing them at a higher level. The activities are familiar, basic ball control drills like boxing, various Coerver exercises. But the instruction from the former USA stars is, just like they hope the kids’ efforts will be, at a higher level.

“I remember sometimes there was something wrong with my shot, and I couldn’t figure out what was wrong,” says Hamm. “A lot of the time, what I would get from a teammate or a coach is ‘Don’t worry, you’ll get it.’ I would be like, ‘What does that mean? I’ll get it? Tell me something to put me back on the right track!’

“We would like these kids to be able to self-correct and evaluate what they are doing, learn what might help them fix problems they have. Giving them an understanding of their body and how the movements tie together is important. So we start from the foundation up – your stance, you balance, where your weight should be. A lot of times, the problem is you are off balance. You’re leaning or reaching. We want to help them from the ground up, so when they are out playing when their coach isn’t around they can think of these things.”

Proper technique and execution are just a couple of the lessons the kids take in during the clinic. There is much more Lilly, Venturini Hoch and Hamm want the kids to absorb, like the under-publicized aspects of their careers they feel are as important as the 333 goals they tallied or the championships they won.

“We are all responsible for one another,” says Hamm. “My actions, my behavior, my energy can dictate the success or lack of success for my team. Am I invested in working hard and trying to improve? And do I see that in the people around me? That’s why we call the camp Team First. Every time I stepped on the field, I knew that if I could make myself the best player I could be, it was only going to benefit my team. I had to do it for them.”

The Team First team has been together since 1991 when Venturini became a Tar Heel. Much of what they do now as adults, as mothers and as public figures, they learned together.

“What I learned from the game, I can apply to every aspect of my life,” says Hamm. “That’s one of the things I hope these kids understand. It’s not just what goes on between the lines, but also when you step off.

“It’s worth it if we can share what we love about the game and our knowledge with just one player, and it gives them confidence — not necessarily to play at the highest level or even a higher level — but whatever they were dealing with on the field or off the field. It could help them handle themselves with more confidence. That’s important.”

Next stop? East Otis, Mass., at the Berkshire Soccer Academy in mid-July.

Tim Nash is a freelance writer and author of the new book, “It’s Not the Glory, the Remarkable First Thirty Years of U.S. Women’s Soccer.” To order a copy, click here