The most exciting women’s soccer games ever

Soccer has been spreading steadily across the globe for the past century or so, but perhaps no sector has experienced quicker growth than the women’s game recently.

This increased interest and better global competition have also made the sport an extremely fun one to bet on, and lines for women’s matches can be be found regularly at most sportsbooks.

Below are six of the most exciting women’s soccer games that fans and bettors alike will never forget.

The match that put women’s soccer on the map (in the United States, at least). Over 90,000 fans packed Pasadena’s Rose Bowl for the final of the 1999 Women’s World Cup between the United States and China, making it the most attended women’s sporting event of all-time. The build-up to the match was immense and began long before the tournament kicked off, with the U.S. having defeated China in the gold medal game at the 1996 Olympics, but China defeated the U.S. in the final of the Algarve Cup earlier in 1999.

Brandi Chastain’s celebration after scoring the winning PK in the 1999 World Cup final is one of the most iconic American sports images of all-time. (Getty Images)

Both sides showed stout defense in the final, battling to a 0-0 draw after regulation and extra time. The teams traded goals in the first two rounds of PKs, but on China’s third kick, American keeper Briana Scurry came up with a save to give advantage to the States. Both sides would make their next two kicks, but Brandi Chastain’s would give the U.S. the championship and one of the country’s most iconic sporting images ever.

For the second straight Women’s World Cup, the champion would have to be decided in extra time and in Southern California (the 2003 WWC was moved there as a result of China’s SARS scare). Heading into the final, Germany looked like the overwhelming favorite, outscoring opponents 26-3 in the group stages and knockout rounds (including a 3-0 drubbing of the United States). 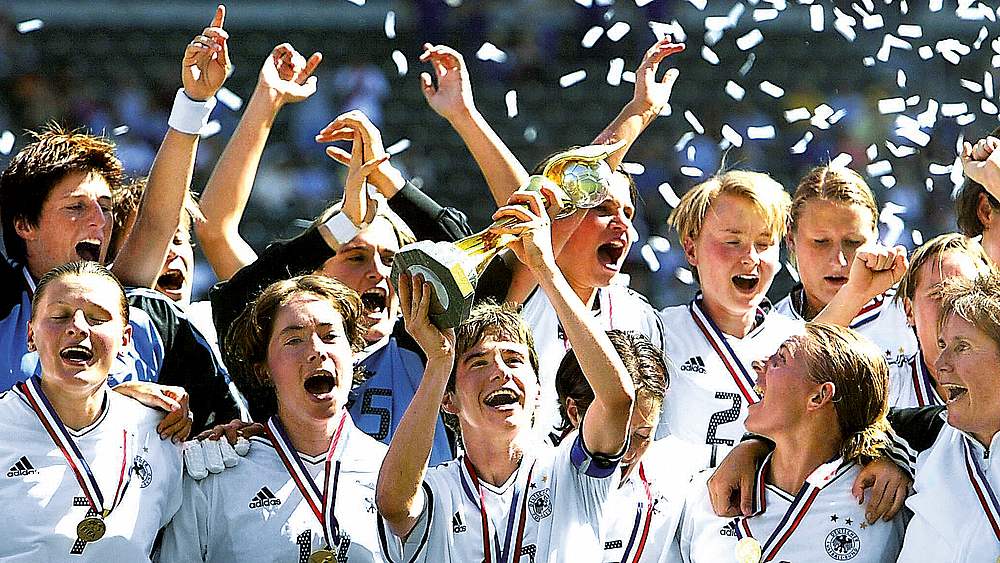 Germany became the first nation to win both a men’s and women’s World Cup. (Source: DFB.de)

So the world was surprised when Sweden drew blood first in the 41st minute. Although Germany would equalize shortly after halftime, the match would remain 1-1 for the rest of regulation. In the 98th minute, German substitute Nia Kuenzer headed in the golden goal that would make Germany the first nation to win both a men’s and women’s World Cup title.

After being the last nation to qualify for the 2011 World Cup, the U.S. finished second in its group and needed a dramatic penalty-kick victory to defeat Brazil in the quarterfinals. Japan needed similar luck and dramatics to make it to its first final, setting the stage for a somewhat unexpected championship tilt.

In extra time, it looked certain that the U.S. would be the first nation to win three women’s World Cups when Abby Wambach scored her record 13th World Cup goal, but a lapse in concentration would allow Japan captain Homare Sawa to score off a corner in the 117th minute to send the game to penalties. There, the Americans would miss their first three penalties while Japan would hit three of four to become the first World Cup champions from Asia.

It is games like these that make the fans enjoy women’s soccer. When everyone thinks that the favorites are going to win and actually the underdogs turn out to be superior. The unpredictability is what makes soccer so exciting, especially if you have a wager on it. Picking the right team to win can be quite difficult not only because you don’t know what will happen in soccer but also the fact that there are so many sites out there with different odds. If you are in this situation, OnlineCasino.com.au has a great sports betting guide, giving you relevant information on the sites, the different odds and the daily bonuses.

For a long time, there was very little parity in women’s English club soccer. Arsenal LFC had appeared in seven of the previous eight FA Women’s Cup finals, so it was more than newsworthy when they were defeated 2-0 in the semis of the 2012 competition by Chelsea. Chelsea’s opponent in the final was another club seeking its first major honor, Birmingham City.

The ladies from London, though, would strike first in the 70th, but an extra-time equalizer meant the Cup would have to be decided in extra time, and then, penalties. With Birmingham ahead 3-2 on penalties, Chelsea’s Gemma Bonner sailed her take over the crossbar to give the West Midlands side the Cup.

The women’s Olympic soccer tournament has been much more lopsided than the WWC, with the Americans winning gold three of the four tournaments that had taken place heading into the 2012 London Olympics. Thus, much of North America and the footballing world was captivated when Canada — always an underdog against their rival Americans — was taking it to the favored U.S. in the semifinals. 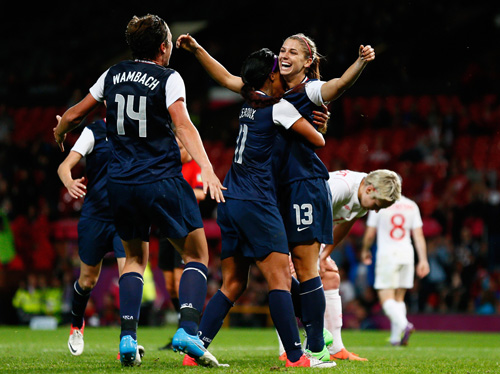 Alex Morgan became a household name when she won the United States the gold medal in London. (Source: ChannelGuideMag.com)

The North American rivals traded three sets of goals in regulation, including a 3-3 equalizer off a controversial PK awarded to the United States. In stoppage time of the second period of extra time, an Alex Morgan header would launch into the net and berth the United States into the gold-medal match, where they would win their third straight gold medal.

Founders Cup 2001, the first professional women’s club soccer championship in U.S. history, was an absolute thriller, played in front of 21,078 fans at Foxboro Stadium in Massachusetts. Brandi Chastain opened the scoring for the Bay Area just six minutes into the match, but Atlanta answered five minutes later and went ahead in the 14th minute on a Charmaine Hooper together. Bay Area went level in the 43rd minute. Sun Wen put Atlanta ahead in the 83rd minute and Tisha Venturini equalized in the 86th minute.

Neither team scored in extra time, so it went to penalty kicks, where the CyberRays scored all four and Hooper and Sun Wen both missed for Atlanta. Three U.S. pro leagues and 15 years later, the 2001 Founders Cup is still the gold standard of U.S. pro club finals.