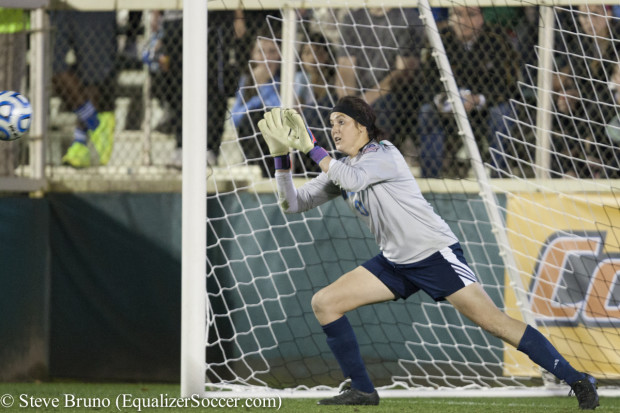 Katelyn Rowland, shown during her record setting career at UCLA, is heading to the Western New York Flash (Photo Copyright Steve Bruno for The Equalizer)

Katelyn Rowland was traded to the Western New York Flash on Friday, a move that gives the Flash depth with the injury to Sabrina D’Angelo and offers Rowland a chance to earn playing time. The former UCLA standout started three matches for FC Kansas City in 2015 but has been buried behind Nicole Barnhart throughout this season. In exchange for Rowland’s services, FC Kansas City will receive the Flash’s two lowest 2nd round picks in 2017. The Flash had previously acquired 2nd round selections from the Dash and Pride to go with their own.

“We are delighted to get a young, talented goalkeeper, and her experience at the various national team levels makes her a legitimate starting keeper in the NWSL,” Flash head coach Paul Riley said, referencing the 22-year old’s stints with the U-20 and U-23 national teams. “She has enjoyed a fabulous apprenticeship under Nicole Barnhart in Kansas City and without a doubt that will give her the knowledge, work ethic and experience to understand what it takes to be a top goalkeeper.”

The Flash opened the season with Sabrina D’Angelo as their first choice keeper but she suffered a wrist fracture during warmups for the Flash match against Sky Blue FC three weeks ago. D’Angelo gutted that one out but was then taken out of play, ceding the keeper job to rookie Britt Eckerstrom who shutout the Breakers in her NWSL debut. Rowland trained with the Flash on Friday and should be available to face the Pride on Saturday at Rhino’s Stadium.

“This is not necessarily a move we wanted to make as we rate Katelyn very highly,” FC Kansas City general manager Huw Williams said. “The trade provides her with an opportunity to compete for immediate playing time. It also provides us with more options in the strong 2017 college draft”

In her three appearances last season, Rowland posted a 1.33 goals against, earning a win and two draws with a clean sheet.

The trade gets Kansas City back into the second round after trading their natural pick to the Red Stars. They briefly owned the Pride’s 2nd round pick before trading it, ironically enough, to the Flash.