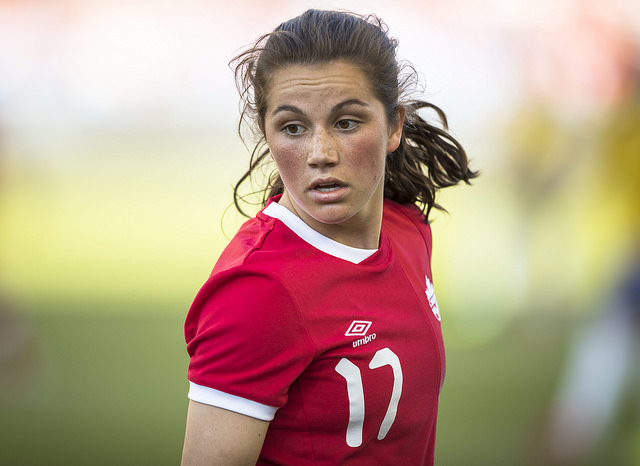 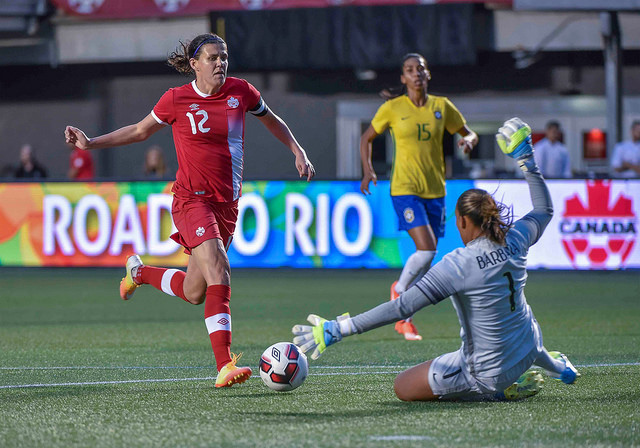 Canada bounced back from a disappointing 2-0 loss last Saturday in Toronto against Brazil with a 1-0 win on Tuesday night in Ottawa. The series was a good chance to see how the team is progressing towards the Rio Olympics, where they have set the lofty goal of returning to the podium. Here are my thoughts and things learned from the pair of friendlies:

1) Herdman has options for his starting XI

Herdman played Ashley Lawrence at fullback in both friendlies against Brazil, a position that she told The Equalizer she has spent the last month continuing to learn in Vancouver with the Excel program. She was a standout in both games at the position, but one can’t help but wonder whether she is best utilized there or in the middle of the park, where she impressed at last year’s World Cup. She eventually moved back to midfield on Tuesday when Allysha Chapman was subbed into the match for Jessie Fleming. This versatility certainly gives Herdman some freedom, but questions remain as to where Lawrence will spend most of her time on the field in Rio.

Where to play Lawrence isn’t the only question mark Herdman has regarding his lineup. Diana Matheson played midfield on Saturday, but was played as a forward on Tuesday, a position the Washington Spirit have used her at this season. Playing Matheson in a more advanced role allows Herdman to have her, Fleming, Sophie Schmidt, and Desiree Scott on the field at the same time (which admittedly doesn’t give the team much width, emphasizing the need for attacking fullbacks).

Matheson playing in advanced role brings us to…

“Sinclair is always the goalscoring threat for Canada…But the big plus for John Herdman’s side is that other players are now starting to step up to assume that mantle. That allows Sinclair to be a little bit more of a playmaker for Canada, which is going to be a real plus as she gets older and transitions to a deeper position in her career.”

Jessie Fleming has been heralded by some as “the next Christine Sinclair,” which, aside from being just completely inaccurate on a positional level, is unfair to reap on an 18-year-old. Canadians have a bit of a habit of doing this with young players of both genders – proclaiming them saviors of the various national team programs at such a young age.

While avoiding these platitudes, it is fair to say that over 108 minutes against Brazil we got a glimpse of just how much Fleming can impact Canada’s game. She was one of the only bright spots in Canada’s awful performance on Saturday when she came into the game in the second half, and over 62 minutes on Tuesday she controlled the center of the pitch and dribbled her way out of trouble on multiple occasions, while putting the forwards through a number of times with nicely timed through balls.

When Fleming first came onto the senior national team scene in late 2013, Herdman praised her awareness and football IQ, while acknowledging that she very understandably had a ways to go physically to be able to compete at this level. In the two and a half years since, she certainly has evolved physically, and while still small, isn’t getting muscled off the ball as much as she used to.

So, will Fleming start in Rio? Canada’s final tune up game on July 23 against France should give us a good indication.

It’s very plausible that by summer’s end, 21-year-old Janine Beckie could be on Canada’s top-10 goal scoring list. She has nine goals in 18 caps, just a short ways off of Randee Hermus, who sits in 10th on the list with 12 goals. This emphasizes just how goal-starved Canada has been over the years when you take Sinclair out of the equation. Not only did Beckie score the winning goal for Canada on Tuesday, but she has actually scored Canada’s last four game winning goals.

She showed attacking intent when she came into the game on Tuesday, beating a fullback twice down the wing with pace. Beckie didn’t start either game, with Herdman electing to start 17-year-old Deanne Rose instead, but I wouldn’t be surprised if Beckie gets the nod up front come August 3rd.

But aside from Beckie’s goal on Tuesday, Canada was badly missing quality in the final third. They created a lot of opportunities – a lot more than on Saturday – but were missing a well-timed final pass or quality shot on multiple occasions. This needs to be better for Rio if Canada wants to punch above their weight for the second Olympics in a row.

5) When things aren’t working, Canada resorts to route one football, and it’s not pretty

There were times on Saturday — many times, in fact — that Canada could not string passes together, or lost the ball immediately after winning back possession from the Brazilians. In this case, the Canucks looked to the long ball option, without much success.

Herdman expressed his displeasure with this strategy post-game. When talking about getting Lawrence more involved offensively, Herdman said: “I just felt we didn’t handle it enough in the midfield well enough to ever get Ash released into areas that can cause some problems. Unless we can solve that, we’ve got some problems. It’s back to route one football, and we don’t want that.”

Of course, long balls aren’t always bad, but it can’t be the only option. The women’s game has long evolved past this.

6) Zadorsky looks at home, so why didn’t Herdman use her last year?

Aside from a couple of rough patches on Saturday (namely attributed to a bad game from Kadeisha Buchanan), the centre back pairing of Buchanan-Shelina Zadorsky looks confident and set for Rio, with Rebecca Quinn serving as a backup. Zadorsky is having a great season for the Washington Spirit, who sit tied for 2nd in NWSL with a game in hand.

This isn’t something learned, but I can’t help but wonder why Zadorsky wasn’t used by Herdman last year when the team clearly had a shortage of healthy, in form centre backs. At a time when Herdman was continuously repeating the need for a youth injection mixed with the veterans he had in the squad for years, it’s odd that he didn’t look to a young player that already had a professional season and a half under her belt. There’s really no reason to look back, but seeing Zadorsky and Beckie perform well this year makes those questions about personnel at last year’s World Cup bubble up again.

You can find all of The Equalizer’s coverage of Canada’s series with Brazil here, courtesy of Harjeet Johal. Canada next plays China in a closed door friendly in France on July 20th, and then plays France in an international friendly on July 23rd.

The Lowdown: Taking stock of NWSL at the FIFA break
The most exciting women’s soccer games ever