The Lowdown: Taking stock of NWSL at the FIFA break 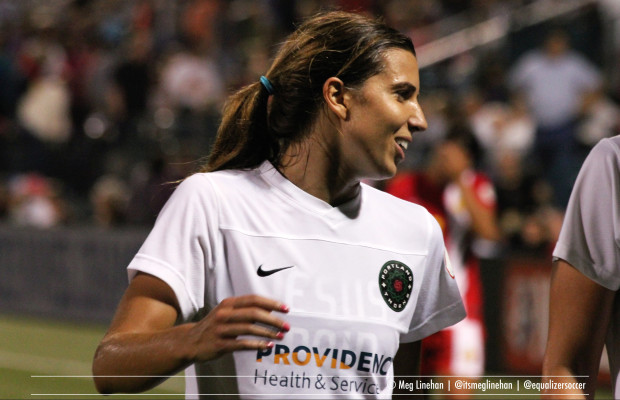 Tobin Heath’s game has matured, and she has taken NWSL by storm in 2016. (Photo Copyright Meg Linehan for The Equalizer)

There was no NWSL over the weekend. The league went dark for the FIFA window that saw the United States play Japan twice in friendlies, Canada tangle with Brazil two times, and several other international matches including Euro qualifiers. The action resumes Friday for what should be a five week stretch until the international interruptions begin. We know the next U.S. match is July 9 which should mean the players remain with their clubs through the prior weekend. But that is not how it went down ahead of the Japan friendlies. So we’ll wait and see.

In the meantime it is time to take the temperature of NWSL as its unprecedented fourth season marches into its middle third.

How has the soccer been? In a word, eh. The goal scoring hex that dominated the earliest weeks has been lifted, but there has been quite a bit of uninspiring soccer played to this point. The Breakers have played seven times and their only goal was a corner kick during which the goal scorer Whitney Engen admitted to losing the ball in the sun on its way to the back post. FC Kansas City managed two goals in their first win last week which doubled their prior output for the season. Two of their now four goals are on set pieces though and they have converted only one out of three from the penalty spot.

All in all, too many games are being clogged in midfield and final passes to put players in dangerous scoring positions are few and far between. When they do come, finishing is far from a sure thing. Yes, part of the puzzle is excellent defending, but offenses could be doing more to make themselves relevant.

Also missing from this season is a signature game. None have been decided by a goal in the last minute or stoppage time. And the only game remotely resembling one you would re-show as promotional footage was a scoreless draw between the Spirit and Thorns that included the league’s best player to date (Tobin Heath) this season being sent off. Sky Blue’s opening weekend upset of Seattle Reign FC was newsworthy, but the soccer was far from scintillating.

Who have been the best players? As mentioned above, it starts and ends with Tobin Heath. Always a wizard on the ball and with set pieces, this year Heath has made her possession magic meaningful. She already has five assists—the league record is nine—despite missing two games out of seven. And her absence was duly noted both times. Although the Thorns managed draws against the Reign in both matches Heath was not in the lineup, everything about their attack looked a step and a half slower without her. As Mark Parsons told his team at halftime against the Pride on opening night: “We’ve got (bleeping) Tobin Heath.”

Heath has stood out, but others are having solid seasons as well. Alyssa Naeher has taken to her new digs in Chicago and after a rough opener for the Red Stars, Naeher ran off four straight shutouts, a streak broken only on a Kim Little penalty. Speaking of Little, the understated Scottish midfielder, recently named BBC World Footballer of the Year, has been her usual excellent self even as the Reign have endured a sluggish start to the season. Rumors that Alex Morgan is healthy have proven out as she has been the Pride’s most dangerous player through a surprising start for the expansion club. In Western New York, Sam Mewis has been the charge that has made the Flash midfield operational.

On the defensive end, Megan Oyster had a howler against the Thorns (in the 4-1 loss not the scoreless draw) but remains rock solid more often than not in central defense for the Spirit. Steph Catley has been extraordinary for the Pride. Christie Rampone may have withdrawn from national team camp but she has been excellent in back for Sky Blue.

Naeher’s exploits have been aided by the Red Stars talented group of defenders plus holding midfielder Danielle Colaprico.

I’m sure some top performers were left out and I’m sure you’ll let me know about it in the comment section.

How are things at the gate? Despite a few disappointing blips, attendance numbers are strong. The current league average is 14% ahead of where the 2015 season finished, and all nine returning teams are ahead of where they were after the same number of home games last season. Orlando’s franchise-opener league record of 23,403 was a boost even though the next two Pride home matches tailed off more than the club was hoping for. Still it is a good day when a women’s league match draws 7,841 and everyone is disappointed.

The history of soccer attendance in the United States suggests numbers should pick up through the summer. But last summer was aided by a spike created by the buzz generated off the World Cup. NWSL clubs hosted 46 matches before and during the World Cup last year. Those matches averaged 4,411 fans and include a Red Stars doubleheader with the Fire that went on the books as 16,017. The 44 matches that followed the World Cup pulled in 5,709 on average. That is a 29% increase not likely to be matched by this summer’s Olympic tournament.

Could the Olympics create an NWSL attendance bump? They could, but there are a few things working against it. One is, the event is in Brazil whereas the World Cup was in Canada which allowed for relatively easy travel for Americans to be there in person. Second, the victory was the first in the World Cup since 1999 and the first many current women’s soccer fans can remember. With that bubble burst there is little chance a gold medal will create any sort of similar fervor. And finally, a World Cup smothers the sports landscape. But the Olympics is a multi-faceted sporting event that spreads fans thin trying to follow as many sports as they can. The likelihood of the women’s soccer tournament transcending the Games is slim.

The point is that while numbers are up, and there should be attendance spikes for summer and the Olympics, they likely will not rival what we saw in 2015. But if every team continues to show growth at the gate it will be a good season.

Where is the commissioner? At last summer’s tickertape parade in New York City, NWSL commissioner Jeff Plush took heat for not speaking on the podium and instead allowing his MLS counterpart Don Garber to implore fans to attend that weekend’s Sky Blue FC match at nearby Rutgers. It didn’t bother me all that much because of the two, Garber’s word carries far more weight. But nearly a year later, Plush’s promises of new sponsor announcements have been empty. The early announcement of a new television agreement brought excitement when Plush tipped it on a national conference call a few days before the season opened, but the momentum died as quickly as it built when it was revealed there would be no televised games until September.

These things take time of course. The slightest legal issue can hold up finalizing a sponsor agreement by weeks or months. And while TV won’t participate until September, every non-televised match is streamed live and free of charge on YouTube.

In the absence of national sponsors, the individual clubs appear to be pulling in more partners. The Flash had their 2015 sponsor revenue beat before the 2016 season started. And if Jeff Plush operates better behind the scenes than in front of a microphone he should do that. But someone needs to get out and be the face of this league.

How are things for 2017? Any lingering worries that a national team strike would blow up the season were squashed last week when a federal judge ruled that the team is bound by the Memorandum of Understanding that extends the collective bargaining agreement through the end of 2016. But what happens then?

No one on the outside really knows how well, if at all, CBA negotiations are going. The players’ unresolved complaint with the Equal Employment Opportunity Commission (EEOC) probably means the sides are not in deep discussions about salaries. But they could be, and the players could always drop their complaint if they reach a deal with the federation. More likely, as most bargaining scenarios do, a potential work stoppage will loom over the beginning of 2017.

From an NWSL perspective, the hope will be that things get resolved in time to get the federation players in with their teams for the start of the season. The annual January camp—more than two years out from the next major tournament—is not likely to be enough of an impetus to force a deal. The SheBelieves Cup, scheduled for some time around March, might be.

And of course, the players and U.S. Soccer could fool us all and emerge arm-and-arm with a shiny new deal before 2016 is up.

Also worth watching will be the pursuit of major players by prominent international clubs. Lyon has been vocal, mentioning Alex Morgan by name, but surely other players and other clubs are in the mix. I don’t think it’s the end of the world if a star player or two decides to go overseas so long as stars from other countries play here as well. But a mass exodus would hurt NWSL in several ways, most notably in the credibility department.