OTTAWA – Canada’s last home match before the Rio Olympics was built as a rematch. John Herdman was looking to see an inspired performance from the same Canadian team that lost to Brazil 2-0 on Saturday in Toronto, and on this occasion, Canada was vibrant from the start. Canada was much more active and crisp on the ball and earned a hard-fought 1-0 win at the death thanks to a chip from second half sub Janine Beckie in stoppage time before 23,568 fans at TD Place in Ottawa.

Beckie was looking at the bigger picture following the win. While scoring is absolutely fantastic, learning, growing, and connecting is what these friendlies are all about. Canada created numerous chances and the Houston Dash forward knew how much it meant to send the home fans off with a victory before the Olympics.

“Yeah it’s a great feeling to get the goal,” said Beckie. “I think across ninety minutes, we had threats in the front line and we had threats in the midfield. The players that were on the field prior to us making changes really broke them down. Our job as finishers is to come in and impact the game. I think that everyone that came into the game made an impact. We had several opportunities on goal. In my opinion it should have been two, or three – nill. I was excited to get that, but we still keep pushing and we still have things that we need to do in the time that we have before the (Olympic) games.”

More than anyone, captain Christine Sinclair knows how tough an opponent Brazil can be and how much a win can do to boost Canada’s confidence. Although Canada did not win both matches against Brazil, Sinclair is pleased with how the team is performing, clicking and coming together as the Rio Olympics approach.

“Obviously it’s always nice to win and to beat a team like Brazil in our last home game before the Olympics,” said Sinclair. “It’s huge for us. I think overall in these two games we’re pretty satisfied with our performances and we’re moving in the right direction.”

With all the chances Canada created and the missed opportunities that followed, you would be excused if you thought the game was going to end scoreless. The Portland Thorns striker was in a joking mood when she was asked if a goal was ever going to come.

“We just wanted to make it interesting until the last-minute and keep the fans here until the ninety-third minute,” joked Sinclair. “It was one of those nights were you’re just hoping something’s going to go in and luckily it did in the last kick of the game. It’s pretty special.”

Diana Matheson was happy that Canada was able to shake off the rust and earn the win.

“When you win you always feel good so there were a lot of positives from last game, but we had a pretty negative feeling because of the score-line. It was pretty positive tonight because we got the win, the main thing to get a goal at home. I think we shook off the nerves in Toronto which was great. Another fantastic crowd tonight, hopefully it sets us off on the right foot for Rio.”

Brazil made numerous changes from their starting lineup on Saturday, including starting Marta on the bench, before eventually bringing her on for the last 20 minutes of the match. Jessie Fleming and Rhian Wilkinson were the only changes to John Herdman’s lineup from Saturday. It was a composed and confident start for Canada, as the hosts controlled much of the opening half and created a few scoring chances. Fleming had a shot from distance that went wide, and centre-backs Kadeisha Buchanan and Shelina Zadorsky worked a give and go play that almost found the net in the 18th minute. Christine Sinclair also looked dangerous with Matheson moving up to play on the wing. 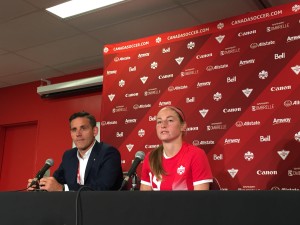 Beckie’s winner for Canada was her 9th international goal. (Photo: Har Johal for The Equalizer)

Canada’s best opportunity to score early came off a terrific run from Deanne Rose. The 17-year-old raced down the left-flank and cut in on goal. Barbara was forced to come out of her net and in doing so, she made a fantastic save. The rebound was there for the taking as Matheson was ready to pounce on the vacated net. Out of nowhere, Bruna Benites made a goal-line clearance to save the day for Brazil. As Matheson describes, this wasn’t the first time she had a near goal taken away at the last second by Brazil.

“Brazilians are so good at getting that toe in last second,” said Matheson. “They took one away from me in Brazil last December too. It was kind of right on the end-line like that.”

Brazil’s best chance to open the scoring came on a through ball from Andressa Alves to a streaking Darlene. Kadeisha Buchanan was back tracking as Darlene was able to get in behind her and attempt  a chip that sailed well over Steph Labbe’s net. Heading into the interval, Canada was composed and in tune. Neither side could score as it was a fairly even first half.

Canada was pressing early in the second half and searching for that elusive opening goal. Matheson was sent in 1v1 thanks to a terrific ball from Sinclair, and tried to chip Barbara. The ball went wide of the net, and Barbara was issued a yellow card for taking down Matheson on the play. On the ensuing free kick, Christine Sinclair forced Barbara into a fantastic diving save. Canada was applying pressure, but they continued to have trouble finding enough quality and ultimately a goal in the final third.

Each side decided to switch things up with several substitutions in the later stages of the match. Marta entered the match in the 71st minute and Christine Sinclair made way for Melissa Tancredi in the 78th minute.

Canada didn’t quiet and continued to push forward and in the end, a stoppage time winner was in the cards. Janine Beckie delivered a sublime chip over Brazil’s substitute goalkeeper, Luciana. Brazil was forced into making a switch in goal due to a cramping issue for Barbara in injury time, which added more time on the clock. Beckie’s goal came at the death as Brazil was trying to hang on.

Player of the Match: Diana Matheson was full of creativity, energy, and pace all evening long. She created plenty of scoring opportunities for herself and her teammates. Matheson has been always been vital part of the national team and Canada will be looking for her to contribute at the Rio Olympics. If she keeps creating and performing as well as he did against Brazil, Canada will have another dangerous threat that can link up with Christine Sinclair, Janine Beckie and Deanne Rose at the Olympics.

Melissa Tancredi: “This is my last club season”
The Lowdown: Taking stock of NWSL at the FIFA break