Melissa Tancredi: “This is my last club season” 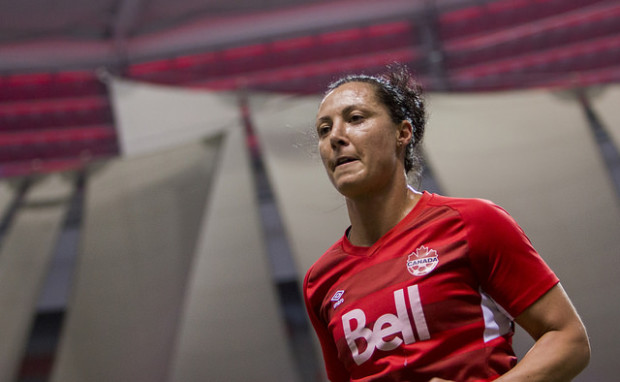 Melissa Tancredi says this is her last season for both club and country. (Photo: Canada Soccer)

OTTAWA – You’ll have to excuse Melissa Tancredi for a moment tonight as she plays in what could likely be her final home match representing the Canadian Women’s National Team. The 34 year-old may possibly hangup her boots in November following the conclusion of KIF Orebro’s season in Sweden’s Damallsvenskan League. Tancredi currently has 118 caps, 25 goals and 20 assists to her name.

“I use to come here all the time in high school,” revealed Tancredi. “Especially for Canada Day celebrations. It’s just a bit nostalgic, it’s beautiful here. I miss a little bit of Ottawa, I don’t really come here much. It’s good to come here and play in front of this crowd and show them a little bit before we go off to Rio.”

Players posed for pictures in front of a throng of media, took selfies, and posted on several social media platforms. Once onlookers realized who was in attendance, fans asked for photos and autographs. You can be sure that when Tancredi made her national team debut on February 26, 2004, there may not have been very much if any fan, media, or attention for a visit like this.

“Yeah, we could have come here like normal with no people around us,” admitted Tancredi. “It always helps, it’s good to see the crowd out. It’s good to see people come out and want autographs and pictures. It just shows you how much our team is out there and getting more media. Hopefully this continues on.”

John Herdman admitted that Tancredi is still a massive part of the team. She could very well be a huge part of Canada’s journey at the Rio Olympics in August. If Christine Sinclair and Tancredi can form the chemistry that we saw at the London Olympics, Canada could surprise a few opponents.

“She’s still a big part of the team,” explained Herdman. “It’s hard to talk about the retirement part because it’s just so close to the Olympics. She’s a great role model to the young players. Mel always brings an energy to the group. She’s funny, but she brings that seriousness when it needs to come. She just has good words of wisdom. I’ve watched over the last few years her being supportive with her tactical wisdom with young players and they really look up to her. Off the pitch she’s a massive loss and on the pitch with that amount of caps… she’s played all sorts of teams, in all sorts of competitions. She just knows certain things that these young players won’t, and hopefully she can share that on and off the pitch.”

The Ancaster, Ontario native, won’t have family and friends in attendance vs Brazil as it’s a bit of a trek from the Hamilton area to Ottawa. Tancredi’s family was present at BMO Field on Saturday for Canada’s 2-0 loss to Brazil. The love and support from her family is something Tancredi will always be thankful for. If at all possible, Tancredi is hoping for one more match on home soil. Canada will of course have to pull a few rabbits out of hats for that to happen post Rio Olympics.

“You know, I’m hoping for a victory tour after the Olympics. For sure it’s emotional. Yesterday (Saturday) that’s my home field and it’s kind of nice to look up and see my family there numerous times that we’ve played there. It’s kind of sad to see that’s the last time. Hopefully there is a victory tour in the books and we’ll be at BMO again.”

Whether Tancredi is able to draw into John Herdman’s starting eleven or comes off the bench, she’s hoping to bring a little bit of Tancredi goal-scoring magic that fans remember from almost four years ago. Tancredi was instrumental in helping Canada earn bronze at the 2012 London Olympics. As she looks back on her career, that’s one of the many highlights she will remember.

“I think it was a great Olympics in 2012, the whole journey. It’s hard to forget anything. What we’ve become and what kind of team we’re playing as and the kind of growth we’ve demonstrated as individuals and as a team. I think that’s my fondest memory.”

Melissa Tancredi has seen a lot of players, coaches, and staff through her years. The national team is in a far better place from when Tancredi first joined. The wave of young talent coming through is showing great progress, confidence, and technical skill. Going forward, the pool of players is bigger, opportunity is there for a younger generation to actually step up and earn a spot with Canada. Tancredi is impressed, but admits that there’s still work to be done.

“I think so, I think there needs to be more,” said Tancredi. “It’s nice to see the fresh faces and giving girls the chance to come play with the top team. I hope that continues, with the growth of the team a lot of girls are getting more interested in soccer. Hopefully that means more numbers for us and more people to pick from.”

note: A crowd of 21,000 is expected at TD Place tonight with 90 percent of the venue sold out.