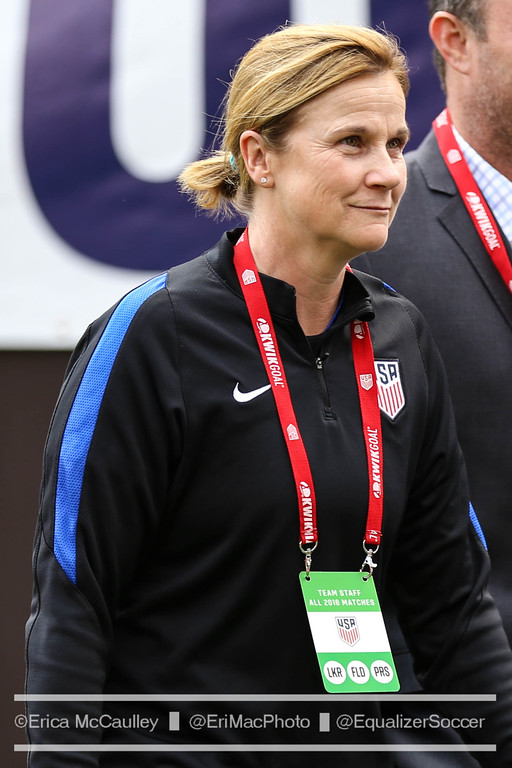 It will be 59 days between the U.S. national team’s 2-0 win over Japan Sunday and its Olympic opener in Belo Horizonte, Brazil against New Zealand. That seems like a decent amount of time, and in some ways it is. But for Jill Ellis and her coaching staff? Not so much.

There will be two more friendlies (and, of course, several NWSL games, but you know…) for Ellis to evaluate her team, and then it’s go time. Therefore, it shouldn’t be that surprising to see the USWNT make just one change from the first Japan game (Thursday) to the second three days later, and that seems to be more to give Mallory Pugh a bit of a rest (with Christen Press inserted) than anything else.

It’s not unreasonable to say that Jill Ellis should wait a little longer before picking her starting lineup for the Olympics. There are not only those NWSL games, but given the Olympic format of 12 teams fighting for eight quarterfinal spots, there is virtually zero chance the U.S. gets knocked out in the group stage (yes, it does help to be atop the group as far as knockout matchups are concerned, getting Germany in the quarterfinals would not be optimal). So the date Ellis really has to have her personnel in order by that standard is really August 12.

However, Ellis’ apparent business model is also defendable. It certainly worked last year, and allows her to really tweak formations and take a look at what she needs to do when it comes to in-game adjustments. So, unfortunately for Ali Krieger, Alyssa Naeher/Ashlyn Harris, and Lindsey Horan, it looks like the U.S. has its starting lineup for Brazil pretty much set (assuming Carli Lloyd is 100 percent by then). So you can take umbrage with using just one sub through 75 minutes of a friendly match or not giving in-form goalkeepers even a chance to unseat the long-time incumbent starter, or not even bothering to look at a true holding midfielder, but Jill Ellis clearly does not seem to want any controversy in the lead-up to what will be the biggest tournament for the next three years, leaving any change to be sorted out afterward.

I don’t necessarily agree with it, and maybe you don’t either, but that doesn’t automatically make it wrong. Ellis did virtually the same thing last spring (although injuries made her adjust a little) and came home with the United States’ first World Cup title since 1999. And no matter what names she puts down in Brazil, the USWNT has a good chance to win another gold medal. Therefore, instead of complaining, let’s assess what we saw this week from the United States in a couple of very good preparation matches against Japan, who won’t be in a fourth straight major tournament final thanks to a horrific Asian qualifying tournament (at home, no less).

What did we learn?:

1) Allie Long is going to Brazil: Yes, Carli Lloyd is out, and it is likely that Long was keeping her spot warm in these two matches, but Ellis would not have started Long in both matches if she wouldn’t have some role in the Olympics. Long, as she has shown in NWSL, did very well in a more advanced role. She complements the ridiculous amount of attacking talent (more on that in a moment) excellently, always looking to make late runs and get herself into dangerous positions (a lot like Lloyd, actually). With players that can get her the ball in those spots, that’s an underrated weapon to have, after all it is the finished product that matters in the end, and the USWNT’s best chance of losing might be having an “off night” where they just don’t finish chances. Long as an attacking sub could help on that type of evening (or obviously be a fill-in if Lloyd or someone else can’t go).

– Hey Allie, you good for Chicago away next week?

The issue with Long will be at the other end. On Wednesday, Japan was able to get through the U.S. midfield (which doesn’t have a true holding mid with Morgan Brian playing that spot) too easily. The most likely option on the current roster for someone to help with that would probably be Samantha Mewis, but she got only six minutes in the two games this week. So, as I said in the open, it is what it is, most likely.

2) The U.S. shouldn’t have trouble scoring goals: Yes, they missed a few chances and both goals Sunday were missed offside calls, but – as of now – almost all the U.S. attackers are in good form, led by Alex Morgan. Japan tried to defend Morgan using a high line, and it was somewhat effective at times, but it just takes one mistake (including one from an assistant referee as we saw on her goal Sunday) for that to backfire in a hurry.

The trio of Crystal Dunn, Tobin Heath, and Morgan up top is tough enough to stop, but then you add in Carli Lloyd and either Mallory Pugh or Christen Press? All five of those are capable of scoring or setting up goals at any time, which has the potential to make Ellis’ job extremely easy in Brazil if that continues. Good luck, rest of the world.

Dunn to Pugh to Morgan has a nice ring to it. #USWNT gets one back. pic.twitter.com/xIXZr6Zelp

3) Japan didn’t exactly field an experienced squad: Obviously, it’s comparing apples to oranges because Japan won’t play in a major tournament until they’re in France in 2019, but imagine the backlash if there was turnover in the USWNT roster like there has been in Japan in the past few months.

Asako Takakura has plenty of experience with youth national teams, so it’s not surprising (especially given the somewhat embarrassing Olympic qualifying run) that she made wholesale changes to the roster. Aya Miyama is out with an injury, but veteran players like Shinobu Ohno, Homare Sawa (now retired), Yukari Kinga, and Azusa Iwashimizu – all over 100 caps – no longer seem to be part of the Japanese mix. In all, just three Japanese players (Saki Kumugai, Mizuho Sakaguchi, and Rumi Utsugi) started both the World Cup and Sunday’s match.

(Seven of 11 U.S. starters were the same, with Lloyd and Megan Rapinoe out with injuries, Lauren Holiday retired, and Ali Krieger the only healthy omission.)

Takakura also rotated liberally between matches, making six changes from Thursday’s lineup, the most significant being in goal, where 6-foot-1 Erina Yamane was excellent Sunday. Thursday’s squad was a bit more experienced.

4) What about NWSL form?: We’ve already established it doesn’t matter all that much it appears, but the two U.S. starters in the worst form are Hope Solo and Morgan Brian. Both did not have great games on Thursday, Brian did not do much to break up Japanese attacks and Solo conceded three times (although it’s hard to make a case that any of them were her fault). They looked much better Sunday, with Brian able to get forward (to be fair, she was Thursday as well) and doing a good job controlling the play from the middle. Solo wasn’t called on much, but when she was did fine.

There are slight concerns about Julie Johnston and Becky Sauerbrunn, both of whom have had slight struggles in NWSL (Kansas City was winless when Sauerbrunn left and Chicago has looked arguably better without Johnston), and there was a moment or two of worry this week. Sauerbrunn decided to come forward for some reason Thursday on Japan’s tying goal and Johnston nearly got caught in a red-card DOGSO situation on Sunday when she got turned.

Look at the pretty. pic.twitter.com/Xo3hNdf6Ym

(Yes, this whole note could be classified successfully as a nitpick, sorry.)

5) No injuries of note: Thankfully, the USWNT escaped both games without any major injury concerns. In fact, at the moment, the only player that seems to be in question for Brazil is Megan Rapinoe. That’s a much better situation than other teams are in and even more reason the United States should enter as a prohibitive favorite for its fourth straight Olympic gold medal.

Weather wasn’t on our side today but you were, Cleveland!

23,535, largest crowd to ever watch the WNT in Ohio! pic.twitter.com/zyoCrcxwze