Ashley Lawrence adjusting to left back spot for Canada 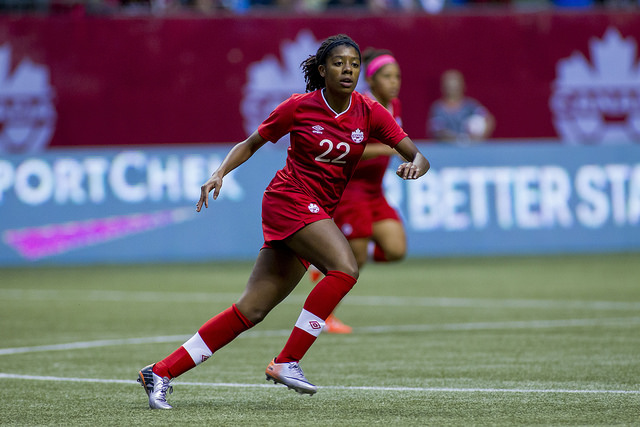 Ashley Lawrence is adjusting to life as a left back. (Photo: Canada Soccer)

TORONTO – As Canada gets set to play Brazil on Tuesday, June 7 at TD Place in Ottawa, they will look to re-group and show that a 2-0 loss to Brazil on Saturday at BMO Field was a small blip. Canada was outmatched by the Brazilians from start to finish and struggled with many simple aspects. The defensive posture was especially concerning during the first half.

Ashley Lawrence was a rare bright spot for a Canadian back-line that was constantly under pressure and turned the ball over far too many times. Lawrence played at left-back, a new position for the former midfielder. Lawrence spent last month in Vancouver working in the Excel program to learn how to play as a full-back. It’s been a challenging learning process to try to familiarize herself with a new position.

“It’s been a bit of a transition from midfield,” said Lawrence. “I think the staff and the team themselves, they’ve put their confidence in me and just in my abilities to be in that position. I’m just very confident and excited to contribute and help us win.”

The Caledon East, Ontario native has been able to lean on her teammates for help and encouragement. It was not too long ago that Josee Belanger was asked to make the switch from playing as a striker to a new position as a full-back. Lawrence is still learning each and everyday, with the help of veterans who have always played at the full-back position. She knows she won’t have to go far if she has any questions.

“That’s the beauty with this team,” said Lawrence. “For starters it was a bit of a struggle to go into full-back. Having players like Rhian Wilkinson, Allysha Champan who are use to it, I was able to go to them as mentors and ask them questions. They were open to any advice, speaking to Josee Belanger, she was in the same position so we kind of had that relation there and it was pretty cool to speak to her and ask her for advice in that regard.”

Although Ashley Lawrence was named Canada’s Player of the Match against Brazil in Toronto, John Herdman wasn’t at all pleased with the play of many of his players in a sloppy effort before 28,604 fans. The former Toronto Lady Lynx player has shown that she can play quite well at left-back, however playing a strong and constant game needs to happen much more often.

“It wasn’t as bright as she’s been through the Algarve Cup and through the qualification campaign, and the two matches
against the Netherlands. She got tested,” Herdman said. “Defensively she showed her pace in the recovery. For the next game, she’ll be challenged to get forward more by getting beyond wingers. I just felt we didn’t handle it enough in the midfield well enough to ever get Ash released into areas that can cause some problems. Unless we can solve that, we’ve got some problems. It’s back to route one football, and we don’t want that.”

The 20 year-old Lawrence is still a young and developing player. That seems to have been forgotten a bit because she’s been involved and playing with the senior team for some time now. She was terrific at the 2015 Women’s World Cup, and perhaps that’s why Herdman believes she has all the tools necessary to adapt and make the switch to full-back, a position that Canada could always use more depth at. Lawrence isn’t worried about the loss to Brazil and will look to get back on track in Ottawa on Tuesday.

“I think a lot of us were pushed out of our comfort zones in terms of positioning and facing a tier 1 opposition. We have our trust in all of our players in any position. I think it’s building those connections, and this is the biggest test against a team like Brazil. They a class opponent and we need to dominate those teams if we want to do well at the Olympics.”

Lawrence will have a large section of family and friends supporting her at TD Place against Brazil. Playing anywhere in Ontario feels like a home match for several of Canada’s players from the Greater Toronto Area, Southern Ontario, and the Ottawa Valley. She isn’t quite sure what the exact number is, but there will be a strong contingent cheering on Lawrence come Tuesday.