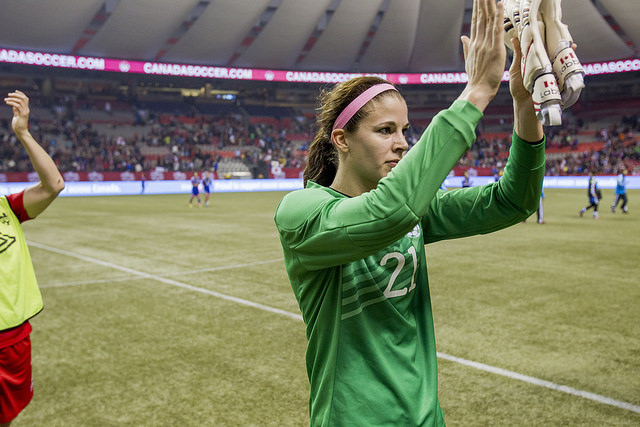 TORONTO – Canada will be heading to the Rio Olympics with Stephanie Labbe as their number 1 goalkeeper. Injuries to Erin McLeod and Sabrina D’Angelo have meant that Labbe has had to step up her game as Canada will be depending on her more than ever.

Some might say that Labbe has been lucky to land the starting nod for Canada in Rio, but Coach John Herdman doesn’t see it that way. Labbe has worked extremely hard and earned that number 1 spot with her play in the NWSL, with the Washington Spirit. Her decision to make the switch to the NWSL was made easier after a conversation with Herdman.

“I spoke to Steph about coming into that league,” said Herdman. “I had a good chat with her because she was going to stay in Sweden, because she’s done brilliantly there. She’s earned some accolades, and I said, look… I think the U.S. league is just a bit quicker, it’s less tactical, but it will challenge you a bit more with how direct teams are and the crossing. She’s rose to that challenge, I’m really pleased she took the allocation and said she’d give it a crack and I think she’s benefiting.”

Herdman confirmed to The Equalizer that Labbe would indeed be his number 1 goalkeeper at the Rio Olympics.

“Yeah, I think for sure at this point,” revealed Herdman. “We’ve got young [Kailen] Sheridan in, she hasn’t got a great amount of international experience and Sabrina with a fractured hand who’s on the road to recovery. We’re confident she’ll be back, but Steph will have had quite a few games under her belt as a number 1. I’m not a big fan of changing keepers prior to tournaments. The last Olympics, it was still a bit of fight between Karina and Erin, but I think at this point, Steph will be in as number 1 and I put my faith in her.”

Labbe’s new venture in the NWSL with Washington has been a smooth transition from her former club in Sweden, KIF Örebro. Through six matches she has helped the Spirit to a stellar 4-1-1 record, with 4 clean sheets. Labbe has made 19 saves, and has a goals against average of 0.83. It’s a new experience that’s off to a brilliant start.

“I went into it expecting a new challenge, a new opportunity for myself and went in just trying to push myself, put myself out of my comfort zone, and that’s exactly what’s happened,” said Labbe. “I’ve been forced to step up my game and push myself to a level and I’m really excited with how it’s gone. I’m just trying to take it each game at a time and push myself to new boundaries and hopefully step out of my comfort zone and continue to grow as a goalkeeper.”

When a player comes over to a new league, it can take a bit of time to adjust. The players play different, and the skill level from top to bottom might not be as balanced. There is also a difference in physical play that the NWSL offers. Labbe was looking for a new opportunity and she is relishing not only being a top goalkeeper, but a leader as well. 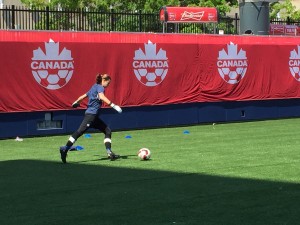 Herdman said Labbe will start both friendly matches against Brazil. (Photo: Har Johal for The Equalizer)

“It’s just being here and playing with different players, playing against different players, new challenges, different quality of forwards that I’m coming up against. The quality of forwards, when they get the chances, they’re going to put them away. I’m having to be a lot sharper on every chance against me. Playing with a new back-line and having to communicate a lot and be that leader to keep us together because we have a young back-line there, just a lot of communication and leadership there.”

As Canada gets set to play Brazil on Saturday in Toronto and Tuesday in Ottawa, players like Labbe are starting to think more and more about the Rio Olympics. Just being back in an overall team environment and playing the host country allows Olympic thoughts to creep in as players get back into a national team environment. Labbe won’t allow herself to think too far ahead, but at the sometime she knows that Rio is something that’s getting closer by the day.

“It’s in the back of my mind,” admitted Labbe. “It’s something that I’m pushing towards. When I’m in Washington my focus is there, my focus is on helping the Spirit. When I come here my focus is on Canada and everyday I’m pushing myself to become a better goalkeeper and in the end, that’s only going to help me be better for Canada.”

The 29 year-old Stoney Plain, Alberta native admits that everything off the field is out of her control. It’s unfortunate that McLeod and D’Angelo are injured and unable to play for Canada at the moment but circumstances have fallen into place and Labbe is focusing on blocking out any outside noise and distractions.

“It’s really unfortunate with injuries and that’s the luck of the game. They’re totally out of your control and it’s not something for me to put any focus on. My biggest mentality right now is to not try to be anyone else, not to fill anyone else’s shoes, but to be the best me that I can be. Right now I’m just trying to be the best goalkeeper that I can be, the best Steph Labbe and that’s all I can do.”

John Herdman has announced that Steph Labbe will start in both matches against Brazil with Kailen Sheridan serving as backup. If Sabrina D’Angelo has recovered from her fractured left wrist, the plan is to give her some minutes when Canada plays France on July 23 and China on July 20, in a yet to be announced closed door match.