A brace from Marta gave Brazil the 2-0 win over Canada on Saturday in Toronto. (Photo: Canada Soccer)

TORONTO – It was a shaky first half for Canada as they took on no.8 ranked Brazil on a sunny Saturday afternoon at BMO Field. Brazil was able to capitalize on mistakes from Canada early on and they claimed a 2-0 win before 28,604 spectators. Marta scored a first half brace and goalkeeper Barbara was not troubled often by Canada as she recorded a clean-sheet.

John Herdman admitted that he’s going to be up late this evening trying to figure out where Canada went wrong against Brazil.

“I’ll be boggling on that tonight. They just looked nervous, as nervous as I’ve seen.”

A disappointed and dejected John Herdman opened the door for a possible goalkeeper switch before the Rio Olympics. Herdman hasn’t lost confidence in Steph Labbe, but he certainly suggested that more development is needed for all of his keepers.

“For Steph, she’s feeling her way into a number one spot, she’s found big shoes in Erin McLeod and Karina before her. From the qualification through Algarve, we opened the keeper battle. Her and Sabrina were fighting through Algarve and there wasn’t a clear winner in that battle, but she’s there. We have to put our faith in her, we have to keep trust, and keep developing her. At the end of the day, this is the highest level of football and we’ve got young people like Sheridan who we might have to look at.”

Christine Sinclair was on the pitch for 74 minutes as she works her way back to full fitness from a bothersome Achilles and calf injury. Sinclair was Canada’s bright spot in a match with few scoring opportunities for the home-side. Sinclair wasn’t about to fault her team for an underwhelming performance, choosing instead to give credit to Brazil for playing a great game.

Sinclair was feeling no injury related effects following the match and would have liked played the full ninety. 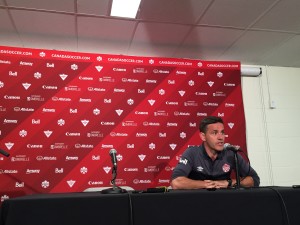 Post-game, John Herdman said he thought Canada looked nervous in the first half. (Photo: Har Johal for The Equalizer)

Canada looked extremely nervous in the opening stages of the match. Steph Labbe had some poor clearances and the usually defensively sound Kadeisha Buchanan was caught out of position and easily dispossessed. Brazil was able to hold the ball well and attack Canada’s back line with numbers.

The opening goal was a result of scrambled defending from the hosts. Buchanan was down and out along the far sideline, Shelina Zadorsky was nut-megged inside Canada’s box, and Allysha Chapman whiffed on a clearance. Debinha was able to find a wide open Marta with Labbe out of position. Brazil’s best player converted with the net vacated. Labbe was pleased with how she settled down in the second half and how Canada played after the interval. She shared her thoughts on a mistake prone match.

Canada was playing a step behind the Brazilians in the opening forty-five. Ball possession was not great, passes weren’t clicking, and whenever Canada did get the ball, Brazil was right on them to try to win it back. The visitors kept the game closer than it really looked, by not pressing Canada even further. A missed open net from Thaisa could have made it 2-0 in the 37th minute.

Brazil wasn’t quite finished creating problems for Canada before the halftime whistle, as Marta doubled Brazil’s lead in the 41st minute. The FC Rosengard striker delivered a low fired shot from distance that took a slight deflection off Buchanan. Labbe got her hands to the ball, but was not able to make the save. The BMO Field crowd was stunned as Brazil really looked like the far superior team on this occasion.

Canada played much better in the second half, but those defensive blunders kept showing up. Brazil was still quicker to the ball, they held the ball more, and really didn’t allow Canada to create much offensively. Time and time again, Canada made odd back-passes towards the back-line. This allowed Brazil to quickly add pressure and quickly close in with an accelerated high press.

Steph Labbe did not have a great game and when you couple everything up, this was a poor match for Canada. The Reds will get another shot at Vadao and the Olympic hosts on Tuesday in Ottawa. After that match we should have a greater idea of how Canada looks and what type of concerns and positives this team has heading into Rio in August.

Player of the Match: Marta was the difference on Saturday afternoon, as she scored a brace and made both of her goals look relatively easy. Canada gave Marta far too much time and space — she was wide open and unmarked on her first goal and had acres of space to score her second. Canada will have to be much better on Tuesday, and heading into the Olympics they can’t allow top players like Marta so many opportunities on goal.

Notes: A passport delay kept Cristiane from joining Brazil until this morning. She will be available on Tuesday in Ottawa vs. Canada.