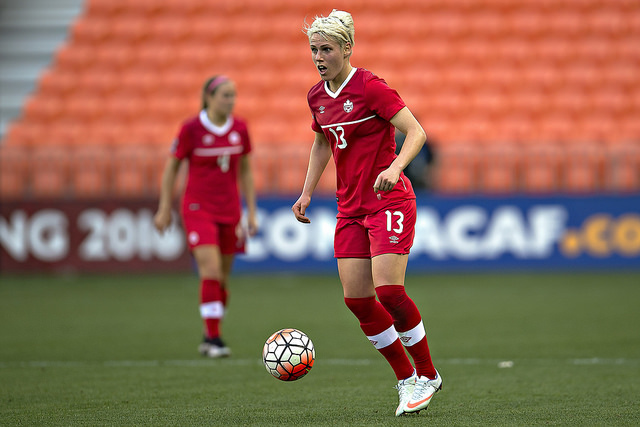 Sophie Schmidt has returned to Canada confident after her first season in Germany at FFC Frankfurt. (Photo: Canada Soccer)

Sophie Schmidt has had an exciting year playing football with FFC Frankfurt in Germany’s Frauen Bundesliga. After leaving Sky Blue FC in NWSL, Schmidt was looking for a new experience that could provide a challenge and offer an exciting new venture. The Abbotsford, B.C. native made 14 appearances and earned 641 minutes for her new club this past season.

The Frauen Bundesliga season ended on May 16 and since then Schmidt has been able to return home and join up with the Excel training program in Vancouver before Canada’s matches against Brazil on June 4 and June 7. Most of her teammates will return to club teams in the NWSL and overseas while Schmidt can use the next two months to rest, recover, and prepare for Rio with Canada’s younger players.

“Yeah, I think it’s worked out perfectly,” said Schmidt, “I’m here playing some games, but then I get to go home and get a little break, a recovery. I also have the opportunity to work on some things that are specific to me in terms of the prep to the Olympics, before the team comes together. I’m really excited about the next couple of weeks.”

The 27 year-old midfielder wasn’t seeing very much playing time at the beginning of the season with Frankfurt. A coaching change in December brought the arrival of Australian coach Matt Ross. But Schmidt earned more playing time and also experienced playing at a full-back position during an overload of injuries within the squad.

“Yeah, it’s a different perspective,” admitted Schmidt. “Every coach has their own philosophy and uses players differently. We had some injuries and stuff. I came back in January, fresh and playing really really well. We had a couple of injuries and I was playing mostly left-back. Yeah, it’s exciting, he’s the new coach and he hasn’t coached at the level before. He’s very encouraging and wants to promote soccer.”

John Herdman has noticed a change in Sophie Schmidt’s play as she is stepping up as a leader and a player Canada can count on to perform in big matches. With the young squad that Canada has, Schmidt will be depended on to lead by example. Herdman isn’t worried about his veteran midfielder, because she has shown that she is able to rise to the occasion when called upon.

“Yeah, she’s loving being back,” said Herdman. “I think in Germany she was played at left-back in and out of position. Coming back to the national team where she’s got a real clarity in her role and what she brings to this team. She just brings an energy, and a passion on and off the pitch. She’s pushing other people to find new levels. For whatever reasons, in the last few games when she’s put the Canadian shirt on and I thought she was outstanding in the Netherlands. Probably our best player. She had two matches there and she was brilliant. She just comes alive in this team and I’m hoping she can continue the form.”

In Germany the culture is to eat, sleep, and breathe football. That’s just how it is in Europe. Getting used to that type of mentality has been something Schmidt has thoroughly enjoyed. Being able to adapt and evolve as a professional athlete on and off the pitch was a big factor in Schmidt’s decision to re-sign with Frankfurt for next season. 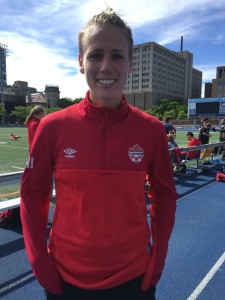 John Herdman will look to Sophie Schmidt to provide leadership to Canada’s young players. (Photo: Har Johal for The Equalizer)

“I re-signed for another season,” an excited Schmidt revealed. “I really enjoyed my time in Frankfurt, loved the girls, the city, and just the soccer culture in Germany, it’s amazing. We have great technical players, but it’s also very physical the league and I’m excited to go back and continue to grow as a person and player.”

Fans heading to BMO Field on Saturday and to Ottawa’s TD Place next Tuesday can expect to see a poised Schmidt who will be looking to show what she’s learned in Germany. Ontario has been a special place for Schmidt, as she scored an absolute screamer against England in a 1-0 victory in Hamilton, ON last summer just prior to the World Cup. Schmidt is hoping to add to her goal tally against the Brazilians.

“I’m definitely confident on the ball, I learned a lot. I worked on my technical game when I was there. (I’m) just continuing with that flare and also looking to score and get in front of goal. The last time we played in this province was Hamilton and I scored. I would like to get back on the score-sheet for Canada and provide that for us.”

[JOHAL: Herdman unconcerned with injuries ahead of Rio]

Canada and Brazil are quite familiar with one and other and neither side will expect any major surprises. Canada lost a pair of matches to Brazil at the Natal tournament in Brazil in December, but was able to defeat Brazil in the Algarve Cup Final this past March in Portugal. Playing the no.8 ranked nation will provide a strong test for a Canadian side that doesn’t play tier 1 opposition regularly.

“It’s huge, they’re one of the top teams in the world and we’re going to be facing nothing but top teams at the Olympics. It’s a good opportunity for us to go out there, play the game that we can and impose our style of play against them. I think now it’s just about putting the finish touches on our play. There’s no big changes at this point and it’s just getting us confident for the Olympics.”

Notes: Canadian striker Gabrielle Carle watched practice on Thursday in a walking boot. She is not expected to play against Brazil on Saturday and her availability next Tuesday remains in doubt.

USWNT held to draw on late stunner from 10-woman Japan
Judge rules in favor of U.S. Soccer on CBA status