Where are they now: Tiffany Roberts Sahaydak 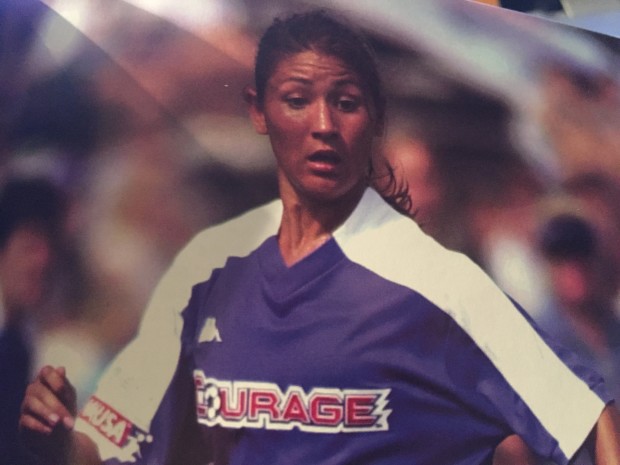 You know those kinds of people, the ones who seemingly can do nothing wrong? Of course you do. We all do. They set out to do something, anything, and it turns out wildly successful. Annoying aren’t they?

Tiffany Roberts Sahaydak is one of those people. Except nothing about her is annoying, and that makes it even worse.

You just can’t argue that she has had a line of successes that others have trouble imaging. For instance, she made her international debut with the U.S. national team at 16, played in a World Cup before she entered college, seeing action in five of six matches at the 1995 World Cup as an 18-year-old. And she won an Olympic Gold medal when she was 19. At the University of North Carolina, she won a pair of national championships. At age 22, she was a member of the 1999 World Cup champions, and at 24, she was a professional soccer player. At 26, she played in another World Cup and captained the Carolina Courage to the WUSA championship. She was a head college soccer coach before she turned 30.

Oh and her picture was on the cover of Sports Illustrated with the rest of her 1999 World Cup Champion teammates, and in 2014 she traveled to the Men’s World Cup in Brazil as part of the White House’s official delegation. That’s right, one day she’s playing soccer in Petaluma, Calif., and now she knows the President.

Certainly someone driven enough to make all that happen before the age of 27, must be irritating, or at least hard to get along with.

“Not only was she a remarkable player, but she was an enthusiastic, passionate and upbeat leader,” says her college coach Anson Dorrance. “I enjoyed going to practice just because I knew she would be there, and I could see her smiling face.”

It’s just not fair, is it? But there’s more. The string of successes continued into her 30s. She’s married now to Tim Sahaydak, lives in Orlando with their two daughters, and she coaches the University of Central Florida women’s team with her husband. Tiffany is the head coach. Tim is the associate head coach. Born 27 days apart in 1977 (she married a younger man) on opposite sides of the country and married 28 years later, the Sahaydaks, met at the University of North Carolina, where Tiffany, of course, won two NCAA Championships.

This fall, they will begin their 10th season working together as college coaches, first at Virginia Commonwealth in 2007, a hiring that prompted Tiffany’s former USA teammate Julie Foudy to say, “You have to think VCU just won the lottery, twice.”

Since 2013, they have been at UCF, replacing another one of Tiffany’s former USA teammate, Amanda Cromwell, who moved to UCLA. The Sahaydaks have compiled a 46-14-4 record and two American Conference Championships. They earned three trips to the NCAA tournament, including a berth in the Sweet Sixteen in 2014. They are one win away from celebrating their 100th career victory.

You have to wonder, though. How hard is it to work with your spouse, especially in a competitive environment where opinions are a crucial part of success?

“We really don’t know anything else,” laughs Tiffany. “Before we started coaching college at VCU, we coached club soccer and we were each other’s assistants. And we also had a camp business together in California. We really enjoy being together, and I like that my weaknesses are his strengths.

“He is a technology guru, and he enjoys doing research and digging into recruiting databases,” Tiffany says. “He’s very detailed and efficient and those are some of the things that I don’t think I am patient enough to do well. I enjoy the day-to-day part of managing the program. I really love my relationship with our players. I like managing the team and the players as a whole. When it comes to soccer, it’s not like I take the defense and he takes the offense. We do it together.”

Says Tim: “I think Tiff, with her national team background, tries to recapture that environment – how to motivate players, how the leaders perform, how new players are welcomed. I think I can look at the other side, like when the team morale might be heading south. I think we might be able to steer us around an impending storm.”

Like all coaches, the Sahaydaks draw on their experiences and backgrounds to form their coaching personalities. And their backgrounds are extraordinary. Tim, a former youth national team player and one of the youngest to ever play in Major League Soccer before knee injuries ended his career, learned from Bob Bradley, Bruce Arena, Clive Charles, Elmar Bolowich at UNC, and even the now-immensely popular TV personality Ray Hudson. “I wish I took notes,” says Tim.

Tiffany’s list, shorter but equally impressive, has Dorrance, Tony DiCicco, Marcia McDermott with the Carolina Courage, and April Heinrichs on it. “I use all my experiences,” says Tiffany. “That’s what I am now, 100 percent. I will sometimes think, ‘What did Marcia do with me when I acted that way? What would Tony say in his pre-game speech?’”

Another situation she has pulled from her background involves her two daughters. Layla is eight and Evie is six and they spend a great deal of time with the team.

“When I was with the national team and Carla and Joy had their kids with them, I remember thinking how great it was for the kids to be travelling on the road with a bunch of athletes who were like siblings,” says Tiffany. “I was always very enamored with that. I hoped that someday, that would be my situation. I have it now.

“They come to practice,” she continues. “We have a nanny and she brings them to the games. I can hear them behind me, ‘Hi Mommy’ and I always turn around and wave. But after the game is the best. They will come running up to us, and win or lose, it helps keep it all in perspective.”

Tim can make an extensive list of positive aspects of coaching with his wife, like long recruiting trips don’t seem as long when she’s there, and putting his daughters in an environment where they are surrounded by strong, athletic young women who are also “good people.” But there is more.

“The single biggest advantage is that I have absolute trust in her,” says Tim. “Whatever she does, I know she has my best interest and the best interest of our kids and our players in mind.”

Recognizing that his wife’s list of accomplishment “is sick,” Tim has come to learn to trust her decisions.

“I was reading somewhere that there are people who unconsciously make the right decision all the time,” laughs Tim. “I think Tiff is like that.”

She may just be, but Roberts Sahaydak did not just fall into a string of fortune. In truth, her success is due to a unique blend of athleticism, tenacity, personality and attitude.

The athleticism? Did we mention that in high school her 400-meter time was good enough to get her ranked in the top 25 track runners in the country. That, combined with her soccer skills, is what started it all and got her noticed in the first place. Then mix in the type of tenacity needed to do a crucial job in the 1996 Olympic semifinals – shut down Norwegian play-maker Hege Riise, one of the most innovative and creative players in women’s soccer history. The mission was accomplished in a 2-1 U.S. win.

Personality? The smile and welcoming nature are not enough to explain it. But the fact five years after the U.S.-Norway Olympic semifinal, Riise became her teammate on the WUSA’s Carolina Courage, and they, of course, became good friends, explains it better. The attitude? While life is not all unicorns, bunny rabbits and rainbows for Roberts Sahaydak, you’d never know it. Relegated to the bench for the 1999 World Cup, she became a leader of the reserves, creating games and rituals to make sitting on the bench more fun, simply because their job was to support the starters.

So, you can’t just credit her success by just being in the right place at the right time, or by using the easy explanation of “being lucky.” She’s just one of those people. Like it or not.