Five thoughts on Rampone’s decision to walk away 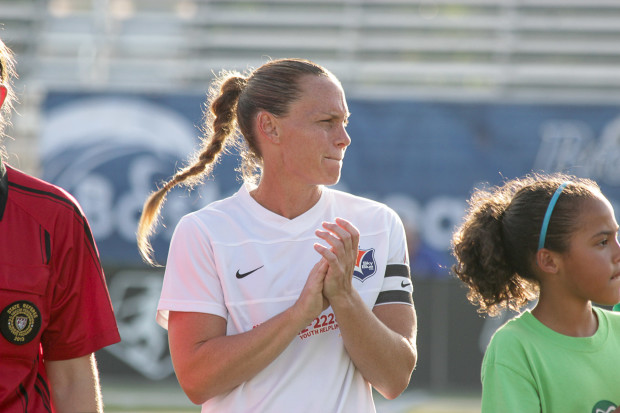 Last week, Christie Rampone sent shockwaves through the women’s soccer community when she pulled herself out of national team camp saying she was not fit for international soccer. The announcement did not include the word retirement but it may as well have. Withdrawing from camp equals withdrawing from consideration for the Olympic roster. A chance remains that Jill Ellis will bring Rampone in one more time for a farewell match—common opinion is that she doesn’t want one—but the next major event is the World Cup in three years. Rampone won’t be going to that. This was her last shot at wearing the uniform in a major tournament.

Here are five thoughts about Rampone’s announcement, career, and the team’s future without her:

Not many walk away in this manner: Rampone was probably a longshot to be in Rio even if everything went perfectly, but all signs pointed to her wanting to be there. Her silence over the winter while others hung up their cleats followed by her returning to NWSL as a federation player to Ellis’s public statements about having discussed the Olympics with Rampone all pointed to her giving it a fair shake. And it’s not like she decided to stop playing. She has played every minute of Sky Blue FC’s season and is still one of the top-end central defenders in NWSL.

Players retire from international play years before ending their club careers all the time, but that is mostly in the men’s game where the club game is far more lucrative. Manon Melis recently took the same decision on the women’s side, saying good bye to the Netherlands upon joining Seattle Reign FC. But for American players there are very few examples of players carrying on with their club careers after taking off the U.S. jersey for the last time—especially when it was their decision.

Why is she fit enough for NWSL but not the U.S.? This is an interesting question because I believe if you judge her strictly on her play for Sky Blue you can make a very strong case Rampone should be the third center back in Rio. But the fitness requirements are different in a U.S. camp. With Sky Blue, Rampone often takes extra recovery days, a luxury not likely afforded to players battling for a coveted Olympic spot.

Many times players with impressive domestic resumes get called into international camps only to be dropped, never to be heard from again. Sometimes these situations are followed by howls from fans about how much international potential that player has. But we never know what goes on behind the scenes and fitness is an issue in lots of these cases.

Sky Blue coach Christy Holly has said Rampone scored off the charts in preseason fitness testing, but clearly she is aware of her limitations approaching her 41st birthday. And she didn’t want to cheat the game, or put herself in a situation to pick up a niggling injury which would then jeopardize the rest of her club season.

Will she still get paid by US Soccer? Yes. Rampone is still under contract with U.S. Soccer to play the NWSL season for Sky Blue. That won’t change at least until the end of the season. The roster could break down to where Rampone is the only non-injured, non-pregnant federation player not on the main roster for Rio.

If I had to guess, Rampone will be deallocated for next season and quietly walk away from the game altogether. At least as it pertains to being a player.

{THE LOWDOWN: Looking at Rory Dames and his honest assessment of the Red Stars}

Is Rampone in the USWNT All-Time Best XI? I don’t like to do this especially when someone is still playing. I believe that no matter who it is or what they have done, a five-year cooling off period is needed before we can truly put someone in their proper place. But who wants to wait five years?

I don’t know if Rampone is one of the two best central defenders ever to wear a U.S. jersey or one of the four best defenders ever to do so. But I will say that a team with Rampone in the middle, directing the rear end of the ship, has the same if not better chance of winning than a team without her. We will never be able to get a tangible measurement of her leadership impact, but literally everyone you talk to gushes about anything from how she handled a bench role in Canada to how she took over as player/coach of Sky Blue on no notice and helped them win the 2009 WPS Championship.

Carla Overbeck was pretty good. So was Joy Fawcett. And Becky Sauerbrunn might be better than all of them. These are fruitless arguments because in the end they serve to inadvertently put down some great player who gets left off the list. So Best XI or not, one thing is for sure. Christie Rampone ranks among the inner circle of all-time women’s soccer greats.

Where does the team go from here? This transition began more than a year ago and you might recall that the United States was the best defensive team at the World Cup with Sauerbrunn and Julie Johnston in the middle of the line and Rampone playing a bit role.

Whitney Engen, who never saw the field at the World Cup, and first-year pro Emily Sonnett are next in the queue after Sauerbrunn and Johnston. Behind them Megan Oyster and Abby Dahlkemper have started every game since being drafted out of UCLA together in 2015 and figure to be up for a look once the cycle turns over. Erica Skroski, currently playing under the tutelage of Rampone at Sky Blue, is a sleeper with her calm demeanor and excellent soccer IQ.

It may be awhile before we see another player that combines Rampone’s skills, speed, leadership, and durability. But there are some quality players coming up behind her, and Rampone’s impact on the United States national team figures to outlast her ability to stay fit enough to play on it.

Where are they now: Tiffany Roberts Sahaydak
USWNT held to draw on late stunner from 10-woman Japan