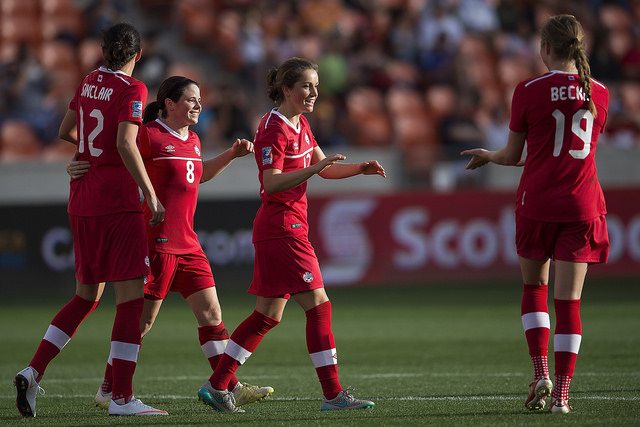 TORONTO – If John Herdman is at all worried about his goalkeepers or all-time Canadian leading goal-scorer Christine Sinclair, he didn’t express that concern during a conference call on Monday afternoon. Canada Soccer announced Herdman’s 20 player roster that will play no. 8 ranked Brazil on June 4 at BMO Field in Toronto and June 7 at TD Place in Ottawa.

Sabrina D’Angelo and Christine Sinclair, who are dealing with injuries, both made the roster.

How much Sinclair actually plays will be closely monitored. She has been limited to 3 appearances with the Portland Thorns this NWSL season, including 45 minutes in a 0-0 draw vs. Seattle Reign FC on Sunday afternoon. Herdman provided an update on Sinclair’s health.

“We’ve got a close relationship with Portland, they’re a great club,” said Herdman. “She’s been struggling with an Achilles and a calf. It’s a process where she’ll hopefully come into camp and now we approach these games with keeping an eye on her going back to performing with Portland. She’s on a return to play.”

With any type of nagging injury, sometimes the best course of action is to shut the player down for a specific time period. Since every player is different, this type of approach works for some while others, like Sinclair, have a competitive spirit that makes it harder to sit out on the sidelines. 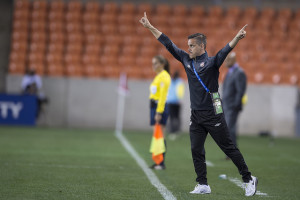 “It’s hard to shut Christine down,” explained Herdman. “She’s a competitor. She’s become smart with managing injuries because she’s never experienced them. It’s the first ever one she had. I think we’ve got some great people around her where we can really monitor and track her. I think we don’t have to shut the player down. When you shut them down you take away other parts of their game. It’s not a perfect scenario. Christine speaks for herself, the goal she scored against Costa Rica [in Olympic Qualifying], she probably shouldn’t have been on the pitch.”

Though she was named to Canada’s roster for the series, Western New York Flash goalkeeper Sabrina D’Angelo will miss both matches against Brazil as she looks to recover from a fractured left wrist. D’Angelo has been excellent for the Flash and her injury came by surprise. Whether or not she will be ready for the start of the Rio Olympics remains unknown. Stephanie Labbe is expected to be Canada’s number 1 keeper.

[JOHAL: Group F will be tricky in Rio]

John Herdman was asked if retired goalkeeper Karina LeBlanc could perhaps come out of retirement to play for Canada.

“We have gone through those thought processes,” revealed Herdman. “In terms of the diligence that goes into the planning of the Olympics, I’m not sure Karina’s been able to have that focus this year. I think what we’ve done and what we know about Sabrina is her injury is not that severe where we’ve got to be digging into retired players. I think we’ll look forward before we look back.”

The chances that players like Kaylyn Kyle and Adriana Leon could join Canada for the Rio Olympics are slim. Canada has fully shifted focus towards a youth movement, and that has meant that some veteran players that played at the 2015 World Cup and had previously been a big part of the team for years are on the outs. Those players mentioned have been notified and they know that if an injury or something out of the ordinary occurs they could be in the mix.

When you go with a younger squad with an average age of 25.2 you’re going to see a few mistakes from time to time, but you’ll also see players playing with courage and massive confidence. This is new opportunity for players like Janine Beckie, Jesse Fleming, Deanne Rose, Gabrielle Carle, Rebecca Quinn, Shelina Zadorsky, and Nichelle Prince. They might not necessarily feel the amount of pressure a stage like the Olympics brings.

“Yeah, I think they are ready, they’re as ready as they’re going to be,” said a confident Herdman. “Not going to hit their peak until 27, 28. Some of the world’s best players, Ryan Giggs, Michael Owen, these male players have played their best years when they were younger. This might be their best tournament ever, because they play with no fear.”

Canada will follow up the two strong tests against Brazil with a friendly away to France on July 23 in Auxerre.

Reign struggles continue in 0-0 draw with Thorns
The Lowdown: When coaches take the honest approach