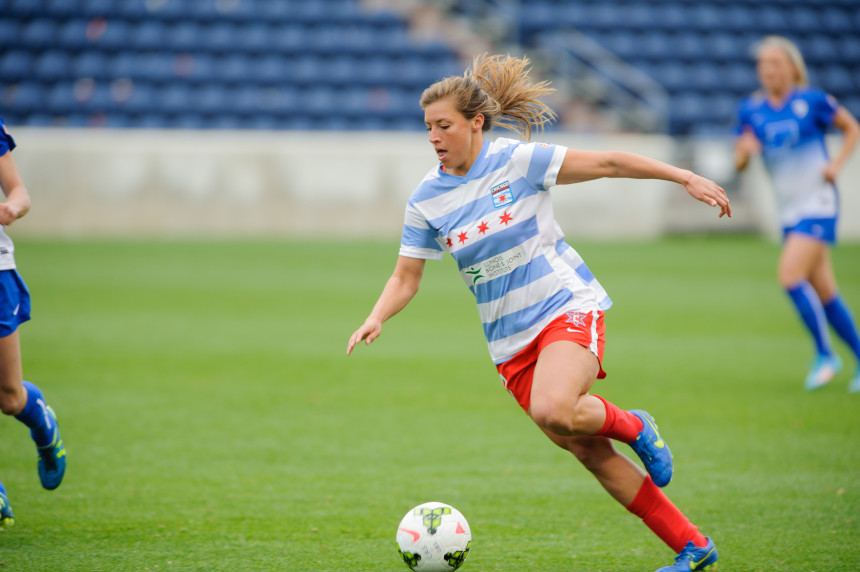 The Red Stars and Sky Blue FC played to a 1-1 draw Sunday night at Toyota Park, the teams’ sixth tie in nine games. The point earned helped Chicago move into sole possession of first place in the National Women’s Soccer League standings with a 14-13 advantage over Washington; the Spirit’s game scheduled for Friday in Houston was postponed due to inclement weather.

Chicago’s leading scorer Christen Press, defender Julie Johnston and goalkeeper Alyssa Naeher were unavailable for the match, away on U.S. Women’s National Team duty. Kelley O’Hara was the only USWNT player out from Sky Blue’s starting lineup, but the New Jersey-based team certainly missed her endline-to-endline play. Earlier in the week, Sky Blue defender Christie Rampone withdrew herself from USWNT training camp, stating she was not yet ready to train and compete on the international level after undergoing knee surgery in December.

Much of the first half was played in the midfield Sunday, with neither team creating many prime scoring chances. But Sofia Huerta cut a through ball from Danielle Colaprico past Sky Blue goalie Caroline Stanley, who had come off her line to challenge, and buried it inside the far post to give Chicago (4-1-2) a 1-0 lead at halftime.

Huerta’s first goal of 2016, which she scored in the 34th minute, was her seventh career goal. All have been scored in games Christen Press has not played. Entering Sunday’s contest, Huerta had taken 11 shots, three of them on frame. Minutes after putting the Red Stars on the board, she nearly made it 2-0 on a fantastic shot from just outside the box but Stanley leapt backwards and tipped it over the crossbar.

After entering the game in the 54th minute, rookie Leah Galton evened the match at 1-1 in the 71st minute with her first professional goal. Galton, who finished her senior year at Hofstra University just two weeks ago, was making her second appearance for Sky Blue (2-3-2) and now has a goal and an assist in less than 90 minutes of competition. She scored Sunday with a left-footed off a cross from Taylor Lytle.

In yet another tightly contested game between two evenly matched teams, Sky Blue outshot Chicago, 8-7; each team tallied three shots on frame. Chicago was unable to produce on three corner kicks awarded after the 79th minute.

FC Kansas City down Pride, 2-0 for first win of 2016
Reign struggles continue in 0-0 draw with Thorns